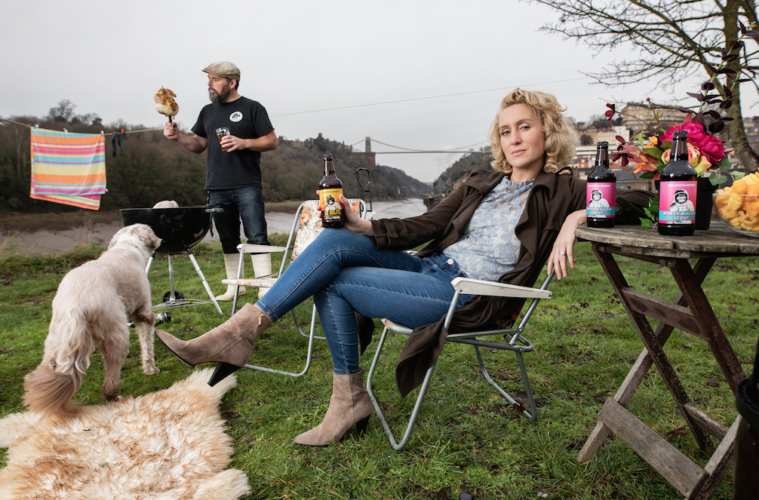 Craft beer: sisters are brewing it for themselves

It is an irrefutable fact that the beer business was started by women and, with more female brewers, DJs and attendees for 2019, Bristol Craft Beer Festival has become much more diverse to reflect that. We met a few of this year’s makers…

In ancient civilisations, women brewed for their families and sold the excess to others nearby. In Egypt, beer was solely produced and sold by women and when the US was first colonised, it was women who were the primary brewers. But when the Industrial Revolution came around, what was once a cottage industry suddenly became big business, in a male-dominated world. The start of said Revolution was some 250 years ago and during those two and a half centuries men ruled the roost when it came to the brewing business. It’s taken a while but things are now shifting back and the industry is seeing the return of women to the brewing scene. Flash forward to summer 2019 and to Bristol Craft Beer Festival and you can see that the scene in the city and, indeed, the rest of the UK, is changing and changing for the better. Now some of the best breweries Bristol has to offer are female-fronted – we’ve caught up with a few of these heroes of the hop…

Maria James, New Bristol Brewery
Along with her partner Noel, Maria founded New Bristol Brewery four years ago, and her journey into the brewing scene is a rather intriguing one. After a 20-year career in broadcast TV, working across BBC, ITV, Channel 4, Channel 5, Sky and the Discovery Channel, Maria was diagnosed with breast cancer and turned to brewing as respite during her chemotherapy. After being given the all-clear, Maria made the decision to leave the life of TV behind and focus solely on brewing and it’s safe to say it’s turned out well. New Bristol Brewery also holds the fine accolade of having the only brewing school within a brewery in the entire country. “Over the last few years we’ve won numerous awards including the best beer at the CAMRA Bristol Beer Festival for our Irish Cream Stout,” says Maria. “To us, making the same beers all the time would be boring so we are constantly experimenting with different hops, barrels and yeasts. We take risks and explore the progression of traditional styles to create increasingly forward-thinking, great tasting beers.”

Kelly Sidwick, Good Chemistry
Kelly first turned to brewing in 2013. Her partner Bob was a keen home-brewer and Kelly was running her own soft drinks business in the West Country. While familiar with the drinks industry, brewing was an entirely new concept to Kelly, but one that she relished; and the first beer Kelly and Bob made together was a variant of Bob’s first ever beer, a malty pale ale called Big Bang. The popularity of Good Chemistry is such that they recently opened their first pub in Redland where Kelly hosts regular social events for Women in Beer, including an International Women’s Day event in March and a cake and beer pairing event with the local CAMRA Ladies group. “I love the way we’re really hands-on here; we feel and taste the malt and smell the hops, we package everything ourselves at the brewery in St Philips and, of course, most of our customers are right here in Bristol so we have a really close relationship with a lot of them,” she says. “Being part of the wider beer industry is great too – it’s a supportive, collaborative industry that’s fun to be involved in!”

Annie Clements, Lost & Grounded
Annie founded Lost & Grounded alongside her partner Alex Troncoso in 2015. Growing in up Australia, Alex and Annie first started brewing in the ’90s but, after years of globetrotting, decided to put down their roots right here in Bristol. Annie’s pre-brewing career saw her work within the hospitality industry; spend 10 years as a social worker; and studying her passions of fashion, art and writing. The first beer she ever made was created using a Coopers Brewery homebrew kit, into which she added lashings of Tasmanian leatherwood honey – a beer that went on to beat partner Alex’s in a homebrew competition. “I’m fiercely proud to be right here, right now,” she says, “working among incredibly talented women across varying brewery roles both locally and globally.” Since setting up in Bristol the the two have spent countless hours developing the brewery from the ground up, with their flying hippo logo symbolising their journey through the beer world. In Annie’s words, “the hippo is a quiet achiever, but you gotta dream big and through hard work and determination you can do anything, even carry the world!”

Amanda Foster, Wiper & True
While Amanda may not have founded Wiper & True, this is a woman who’s spent her entire working life in the brewing business. Her journey into beer started at the age of 15 in her hometown of Toronto, where she landed a summer job at Molson Canada to help pay for university. Initially working on the bottling line, Amanda returned each year to experience all elements of brewing on a vast scale. When she graduated after her biochemistry degree, she applied to work at the brewery’s analytical lab and quality department. Amanda eventually made the move to Bristol where she began working with Wiper & True. Gaining her IBD general certificate in brewing and working her way through the ranks of one of the city’s most loved breweries, Amanda is now production manager and one of very few women in the country to hold this position. “The first home brew I made by myself was terrible,” she remembers. “I tried to make a Tim Hortons coffee and donut stout as a shout-out to my homeland and I did not do them proud. I have learned since then to not put coffee grinds directly into the kettle…”

Megan Oliver, Arbor Ales
The Bristol craft beer scene’s old timer, Arbor Ales was started by Meg and partner Jon way back in 2007 and they’ve been a huge part of the city’s craft beer growth, with over 400 different beers brewed over 12 years. The idea behind Arbor’s creation may have come from Jon, but Meg was firmly the brains of the operation, setting up sales channels and ensuring Arbor could showcase the fruits of its labour. “It was Jon’s idea and I was somewhat dragged along for the ride,” she says. “Just as well really, as Jon hadn’t really put much thought into who was actually going to sell the beer we were making. It’s been amazing to watch the beer scene in Bristol grow over the last 12 years; we’ve become good friends with some really lovely people in the industry.”

Bristol Craft Beer Festival returns, 7 & 8 June, to its waterside home at Lloyds Amphitheatre. Bringing together the best beers the world has to offer, as well as a stellar line-up of female DJs including Mollie Collins and Jamz Supernova, who will pump up the party vibes, and a smorgasbord of Bristol’s finest street food, it’s a party you won’t want to miss. Tickets are available from £45 which includes festival pours of any beer from any brewer, access to the people that make the beer, a tasting glass and a programme.

Lead image: Noel and Maria James, who have the only brewing school within a brewery in the country, kicking back beside Brunel’s Bridge