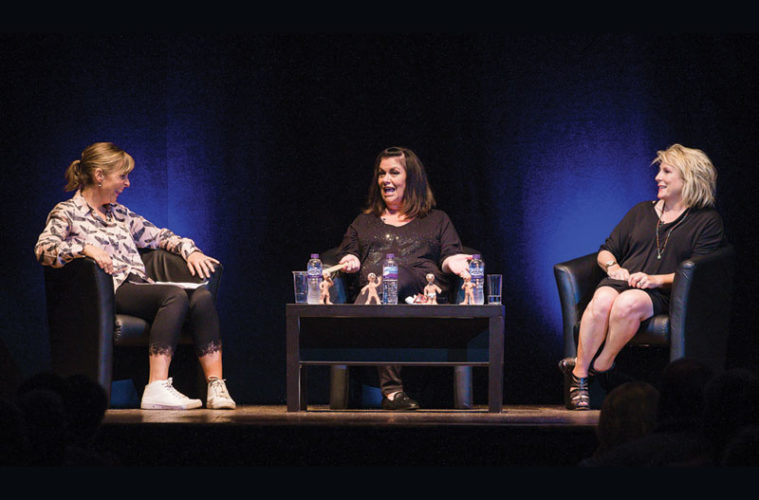 As Slapstick Festival returns to celebrate its sweet 15 and inject some jollity into the most commonly dreaded of the calendar months, founder and director Chris Daniels delves into the archives to pick out favourite moments

Bristol’s festival of silent and vintage screen comedy returns from 16 – 20 January, with a 15th annual edition offering more than 30 laugh-out-loud events and a guest list which includes all three Goodies, Richard Herring, Little and Large, Sally Phillips, Lucy Porter and Tim Vine. To mark the milestone, here are a few of my most unforgettable memories from festivals past…

What the people want

It was a big gamble back in 2005 when I decided to test my belief that I wasn’t the only person who wanted to see silent comedy film classics as they were made to be watched: on a big screen, with an audience and accompanied by live music. So it was a thrill – and a relief – when some 600 people turned up. Audiences have grown year-on-year ever since, and these days Slapstick’s mix of silent film and comedy nostalgia regularly attracts well over 6,000 visitors from the UK and abroad.

When 90-year-old Jean Darling visited, she took audiences right back to the golden age of silent cinema. As a child actor, she’d starred in dozens of Our Gang films and appeared with Laurel and Hardy in Babes in Toyland. She was also on the set when the duo made Way Out West (showing at Bristol Old Vic on 18 January, with Bill Oddie introducing) and sang along as they rehearsed its best-known tune: In The Blue Ridge Mountains. With her event’s host, Sanjeev Bhaskar, she led a rousing reprise of the number at Colston Hall, giving everyone in the audience that night the right to say they’ve sung it with someone who sang it with Laurel & Hardy when still new!

Eric Sykes was the first to receive what is now an established part of the Slapstick calendar – the Aardman/Slapstick Award for Comedy Excellence (a personalised Morph). Many other top entertainers have received it since – among them Michael Crawford, Ken Dodd, French and Saunders, Michael Palin, Reeves and Mortimer and June Whitfield – but Eric was a special hero of mine and it was an honour to meet him at what was almost certainly his final stage appearance.

Live music is a key ingredient of every Slapstick and will be so again this year, thanks to soloists on piano and harp, our ‘house’ band, the European Silent Screen Virtuosi and the massed instrumentalists of the Bristol Ensemble. And it’s not only used when we’re showing silent films. We’ve celebrated Bill Oddie’s songbook for The Goodies; heard Paul McGann sing Charlie Chaplin’s Smile with a flashmob choir; seen Barry Cryer duet with Neil Innes, and we’ve belted out Always Look On The Bright Side at a screening of Monty Python’s Life of Brian introduced by Terry Jones. But one of the most unforgettable musical moments was when rock god Rick Wakeman improvised on grand piano to a Buster Keaton film.

Even the best-planned festivals can encounter glitches but there’s no denying we’ve had A-list help on the rare occasions when a booked celebrity has become unavailable at short notice – Jason Donovan deputising for Christopher Biggins at a Rocky Horror Show screening; Stephen Merchant taking over the gala mid-show after Robin Ince was called away by a family emergency; and the late, great, much-lamented Victoria Wood so enjoying her stint as Dara O’Briain’s stand-in that she returned to helm further Slapstick events.

We’re often pleasantly surprised to find out how many current celebrities share our admiration of silent era clowns – for instance, Chris Addison, Sanjeev Bhaskar, Marcus Brigstocke, Simon Callow, Graeme Garden, Matt Lucas, Shappi Khorsandi, Aardman’s Peter Lord, Stephen Merchant, Bill Oddie and Lucy Porter (all past and/or 2019 guests) are not only fans but knowledgeable. The surprise was all Lee Mack’s, though, when national treasure Barry Cryer interrupted Lee’s salute to Laurel & Hardy to give him a faceful of custard pie.

TV nostalgia is always popular with Slapstick audiences and has seen the festival reuniting the casts of many much-loved shows, such as Here Come The Double Deckers, Do Not Adjust Your Set, The Goodies, Monty Python, At Last The 1948 Show and The Young Ones. This time, we’re putting Little & Large back together for the first time in decades (Bristol Old Vic, 18 January) and taking a look at The Inbetweeners (BOV, 20 January) but our biggest coup, and fastest-selling show to date, was the first on-stage reunion in eight years of French and Saunders.

It’s always good when guests have strong local connections – for instance, our 2019 guest curator Richard Herring is a Somerset lad; Eddie Large of Little & Large lives in Portishead; our 10 February gala host Marcus Brigstocke attended the University of Bristol; and 2018 guests Ade Edmondson and Nigel Planer were here often while filming The Young Ones; much of it shot in and around the Gloucester Road. But it was 1980s Bristol resident Vivian Stanshall – frontman of the Bonzo Dog Doodah Band; the MC on Tubular Bells; creator of Sir Henry at Rawlinson End – who lured Stephen Fry to Slapstick to present a tribute show and so helped to reignite interest in Viv as a writer, songsmith and artist.

• Slapstick Festival takes place at Bristol Old Vic, Bristol Cathedral and Watershed and will be followed on 10 February by a family show with children’s TV favourite Andy Day and a silent comedy film gala hosted by Marcus Brigstocke; slapstick.org.uk