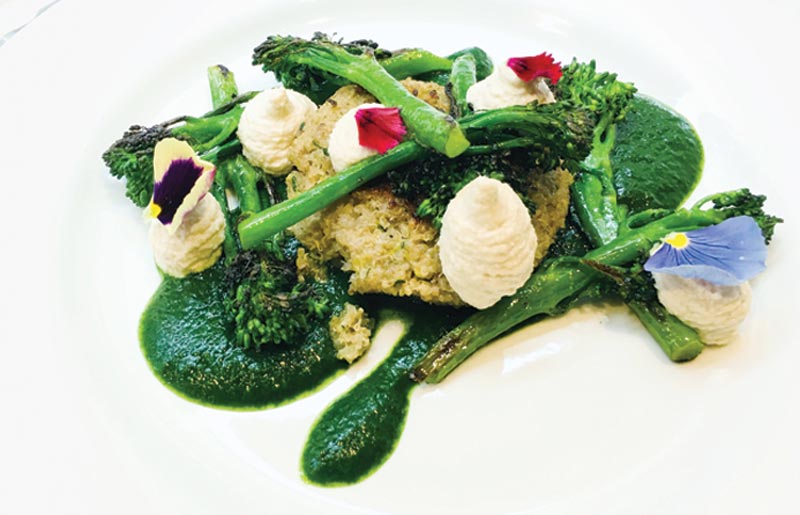 So fresh and so green: vegan Bristol

One of Britain’s fastest growing lifestyle movements is the talk of the town, says Sarah Merson

Increasingly, and as a general rule, society is becoming more discerning about following a healthy and even ethically sound diet. It’s no wonder then that the number of vegans in the UK has risen in recent years. In fact, in a poll by the Vegan Society in 2016, it was estimated that the number of people adopting a plant-based diet in Britain had increased by 350% in 10 years, taking the total to 542,000.

And Bristol, with a growing number of plant-powered eateries, is fast evolving to become one of the most vegan-friendly cities in the country. It doesn’t stop at restaurants either – from producers of dairy-free cheese to specialist pies, Bristol has a lot of options for the herbivores among us.

• Just outside of Clifton Down Shopping Centre sits the inconspicuous Spotless Leopard van, which serves quick, artisan food for workers and locals looking to grab a quick bite to eat. “I started the business in 2012 when I’d just finished my degree and had been vegan for about three years,” explains founder Louise Abel. “I wanted to create a job for myself which aligned with my ethics and for me, to be an ethical business there was no way I could have animal products on the menu. Most of our customers aren’t vegan though, they are regulars who just enjoy the food and work nearby. But when someone’s really excited or has travelled far, it’s always obvious that they’re vegan. Our most popular dishes are probably the lentil, bean and mixed seed burger in a wrap or the ‘chilli non-carne’ which is served with brown rice, avocado and tortilla chips. I personally think the best dishes are the macaroni cheese or the tempeh Reuben sandwich, but I can’t seem to convince people to give up their regular orders!”

• With a life-long dream of sharing healthy food, the owners of Fi Real, on West Street in Old Market, were among the first in Bristol to offer a largely vegan menu when they opened their doors in May 2014. The restaurant holds up to 25 diners but caters for takeaway as well. Based on Caribbean food, the ethos here is that whether vegetarian or vegan, you need not sacrifice taste or variety.

• It was the co-owners of East Bristol Bakery in Easton who first had the inspiration for Flow Bristol in 2015. Acting as head chef since early 2016, Jen Williams recently took over the restaurant, which serves a selection of small tapas-like plates, around a third of which are vegan. “The current favourite is our buttermilk twiglets – marmite glazed and served with a set smoked cheddar custard – which are truly delicious” she says. “Customers are also loving our vegan mushroom dish; locally grown mushrooms with lentils, tempura samphire, sea herbs and a mushroom broth foam.” At this inclusive, city-centre eatery, found on Haymarket Walk, an estimated 15% of customers are vegan, with around 40% vegetarian and the rest omnivore. 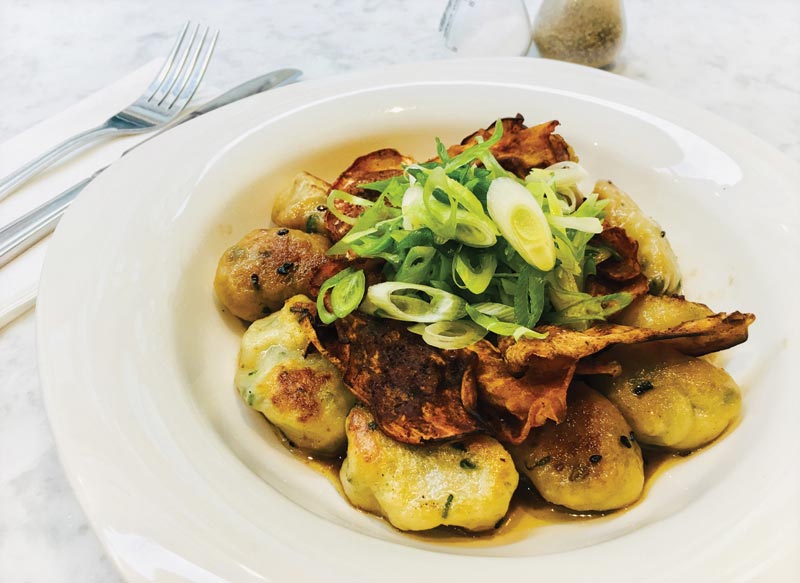 • Over on St Stephens Street, 1847 takes things a step further with 85% of their menu now vegan. “With the entire kitchen staff being vegan, we really put heart and soul into every dish we create and with so many ideas, we change the menu quarterly to keep it fresh and interesting for all,” says head chef, Jilisa Barnaby. At the moment the most popular dish is the courgette and quinoa fritter with spinach puree, cashew cheese and tenderstem broccoli. Although approximately half of their customers are vegan, they appeal to plenty of ominvores too.

• Matter Fast Foods, opened just over a year ago on Fishponds Road, is dedicated to serving fish and chips with a twist – no animal products are used. The vegan ‘fish’ is made using fried tofu, and a popular pudding choice is the deep-fried jackfruit balls. “We opened a vegan restaurant because we wanted to help develop the infrastructure in an under-served plant based community,” says owner Jon Luke. “We appeal to all types of eaters with popular dishes like tofish and chips and Chinese stir fry, as well as the Bristol version of Temple of Hackney’s vegan fried chicken and our sweet-and-sour jack fruit balls which are a play on sweet-and-sour pork balls). We don’t just do junk food though, we also serve salads and vegetables. Everything is made from scratch and we use organic ingredients sourced from our mother shop, Matter Wholefoods. With any success we hope to branch out into other areas of the country, and set up new ventures working with nature and people to increase vegan awareness and help improve environmental issues.”

• Perhaps the latest opening (end of February) on the vegan scene is independent, grassroots grown, 100% vegan café-bar, Roots Lounge Bristol on St Nicholas Street, serving coffee, tea, soft drinks and some lunches. But such is the rise in veganism that restaurant chains including Pizza Express, Zizzi and Pizza Hut are offering vegan cheese and places like Wagamama provide a separate vegan menu. The Real Greek is perhaps among the latest to jump on the plant-powered bandwagon, with their 30-dish dedicated vegan menu that launched at the end of March.

• Vegan since 2010, Jonathan Chenoweth founded Nutgrove Kitchen in 2017, specialising in Somerset-made, dairy-free cheeses and operating out of Southville. “We started making our own vegan cheese as we couldn’t find any on the market that we liked the taste of, so we thought we could do better!” he says. “I’d been developing cheese-making recipes for about two years before I really perfected it. Our cheese is cultured, fermented and matured, using a similar process to how dairy cheese is traditionally made, and that gives it a delicious cheesy taste. We start with whole, organic plant ingredients – almond milk or soy milk. Our Calvaire dairy-free cheese has a white rind on it like a Camembert and looks great on a cheeseboard. We mature it for weeks, turning it by hand every few days to grow the rind. It looks and tastes amazing, and lots of non-vegans say they can’t believe it’s dairy-free. Our Edale dairy-free cheese is crumbly with a sharp bite to it, like feta. It’s great on its own, in a salad, or to cook with. We now sell our cheeses at local delis and health food shops across Bristol, at festivals, and online via Farmdrop. We also deliver by bike to our stockists all over the city.” 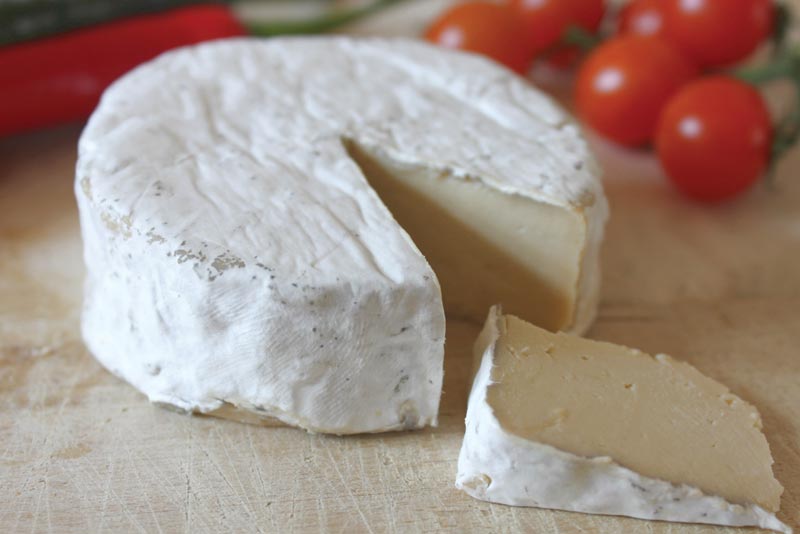 • Long-time vegetarians Lara Fair and husband Finn took the step to become vegan and, thus, their vegan pie company Pie Baby was born in 2015. “We were desperate to recreate the home comforts of a New Zealand potato-topped pie and just couldn’t find a substitute on the UK market at the time so we decided to create our own,” they recall. Currently Pie Baby creations are available at The Golden Lion pub on Gloucester Road, The Grain Barge in Hotwells and Roots Lounge on St Nicholas Street – as well as on Deliveroo. “We have plans to be involved with markets and do a number of pop-ups over summer, so do look out for us,” says Lara. “Starting with absolutely nothing, we crowdfunded to get off the ground and now have plans to open Pie Shack as soon as we see it as a viable option. This will be a one-stop shop for all things pie and vegan junk food. Think shakes, filthy fries, slices of sweet pie surrounded by great tunes and great people. Watch this space!” 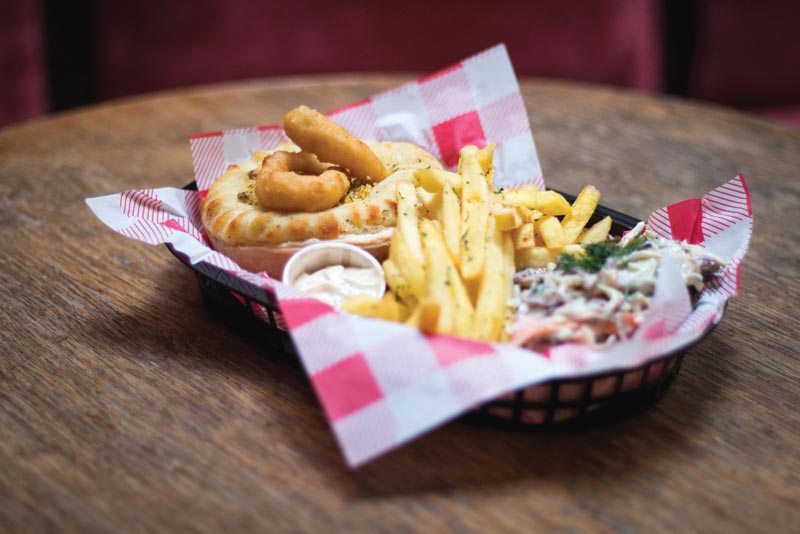 Bristol Vegans is a large Facebook group with more than 4,000 members who regularly seek out new places to eat and share tips, recipes and knowledge about where to source the best food. Bristol also has a separate listings website (veganbristol.com) offering a directory of all things vegan in the city. VegFestUK (bristol.vegfest.co.uk) also arrives at Ashton Gate Stadium this month – 26 & 27 May – including events, exhibitors, educators and a three-course vegan meal offered by the Heineken Lounge Restaurant.

Featured image: At the moment, 1847’s most popular dish is the courgette and quinoa fritter with spinach puree, cashew cheese and tender stem broccoli – vibrant!