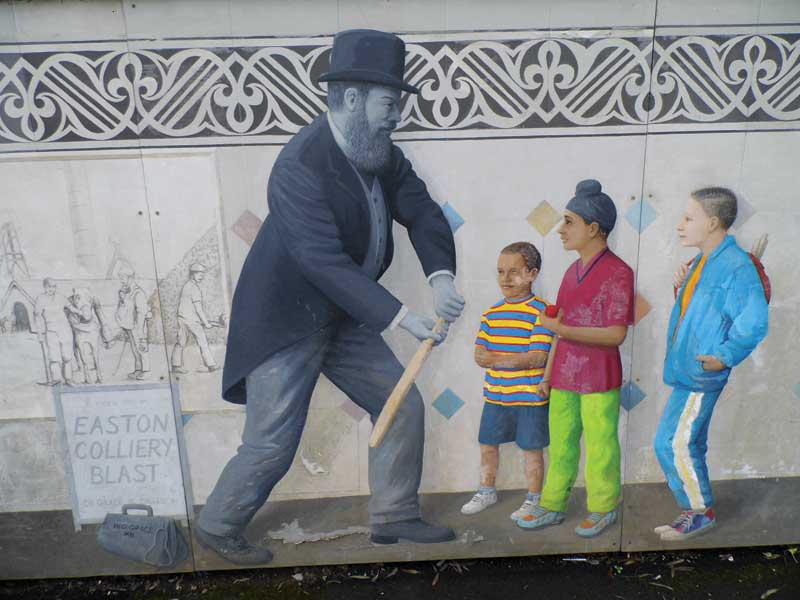 His life may have been bookmarked by violent events but WG Grace enjoyed a life of free-spirited exuberance, that of the gentleman cricketer. Words by Stephen Roberts

Thwack! The ball met the middle of the bat as though it was magnetised, and leapt over the cordon of helpless fielders, bouncing just once before it disappeared over the boundary rope and into the undergrowth. It was another four to the ample, legendary figure of WG Grace. He was, literally and metaphorically, cricket’s first big attraction and sport’s first superstar.

William Gilbert Grace was a Bristolian, born in the year of revolutions 170 years ago, and who would die in another turbulent year – 1915, during the early stages of the First World War. (He supposedly stood in his garden shaking his fist at German Zeppelins.)

His existence on this Earth may have been bookmarked by violent events, but Grace himself enjoyed a life of free-spirited exuberance, that of the gentleman cricketer.

Grace was born on 18 July 1848 in Downend – today a residential outer-suburb of Bristol, although it would have been a distinct village, surrounded by countryside, when Grace came into the world. The house in question was Downend House in North Street. He was the eighth of nine children and was baptised in the local parish church. 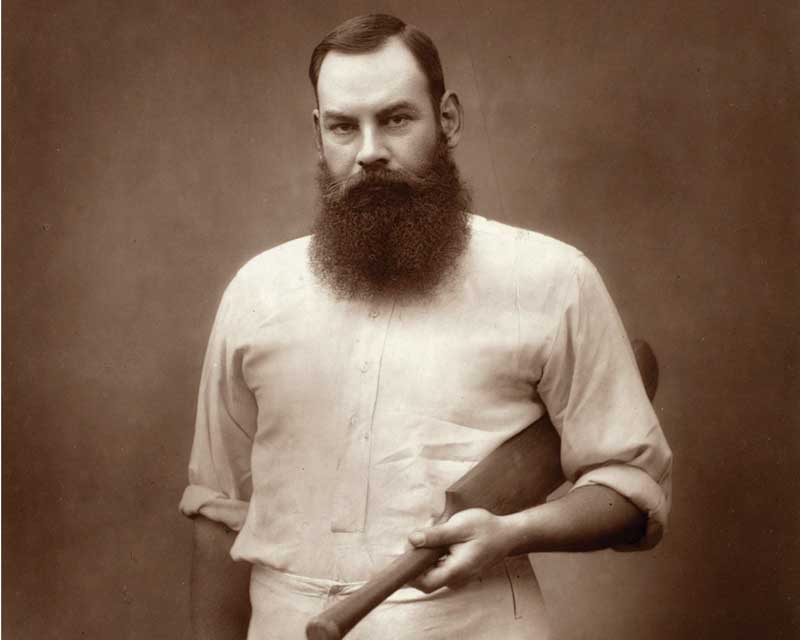 His mother and father were both keen on the game of cricket apparently, so while there is absolutely no truth in any aphorism that he might have been born with a bat in his hand, perhaps he was blessed with the next best thing; encouraging parents. In 1850, when Grace was two, the family moved to a nearby residence called Chestnuts, which had a short-lived orchard. His father began systematically clearing said orchard to create a practice pitch for his children to play on.

Grace recalled that he watched a cricket match for the first time when he was barely six and played for the West Gloucestershire club in 1857, when he was only nine. The first recorded match in which we know Grace participated was one played at Durdham Down, just after he turned 11.

Grace was part-educated at home as his tutor was the curate of Downend parish church. There were other parental ambitions, besides Grace being able to wield a bat: they wanted him to become a doctor (his father was the local GP). In later life, whether he was ministering to the sick, or crashing willow against leather, he cut an imposing figure: he grew to be six-foot-two.

“With his full black beard, he marched to the wicket looking every inch like Little John from Robin Hood stories but armed with a cricket bat instead of a staff…”

The young man was a prodigy. By 1864, he was playing for Gloucester County, aged just 15, and was chosen for the prestigious ‘Gentlemen versus Players’ match. This match tells us a lot about the mores of the time: a first-class cricket match generally held once or twice a year, for well over 100 years. It was contested between gentlemen (amateurs) and players (professionals). Grace turned out for the gentlemen and it was his considerable presence that enabled the amateurs to more than match the professionals. Incidentally, considering the sums of money that Grace earned from playing the game (read on), it does seem like a bad case of ‘shamateurism’ that he could turn out for the gentlemen.

Aged 18, Grace played for England versus Surrey, scoring 224 not out, but also found time to show off his all-round sporting prowess by dashing off part-way through the game to compete in a hurdles race at the Crystal Palace, which he won. On another occasion, it is said that he deliberately gave up his wicket so that he could take his first ride in a car. So, he quite possibly was a petrol-head too.

Not just a cricketer, he enlisted at Bristol Medical School in 1868 when he was 22, going on to obtain a medical degree in 1879 and have his own practice in Bristol. If you’re wondering how it took so long for him to qualify, it was simply that he spent more time at the crease than he did at his studies. By the time he finally became a doctor, he had morphed from bachelor to keen cricketer and a married father of three. His first love was always cricket, so medicine was not allowed to get in the way of a good innings. You can almost visualise Grace, a right-hand bat, practicing his favourite bludgeoning strokes, while half-listening to the woes of a patient.

The cricket was still number one: in 1876 he managed to wallop over 800 runs in just eight days. Meanwhile, his most celebrated act as a doctor is said to have occurred (typically) at a cricket match when an unfortunate and accident-prone fielder impaled himself on the boundary fence. 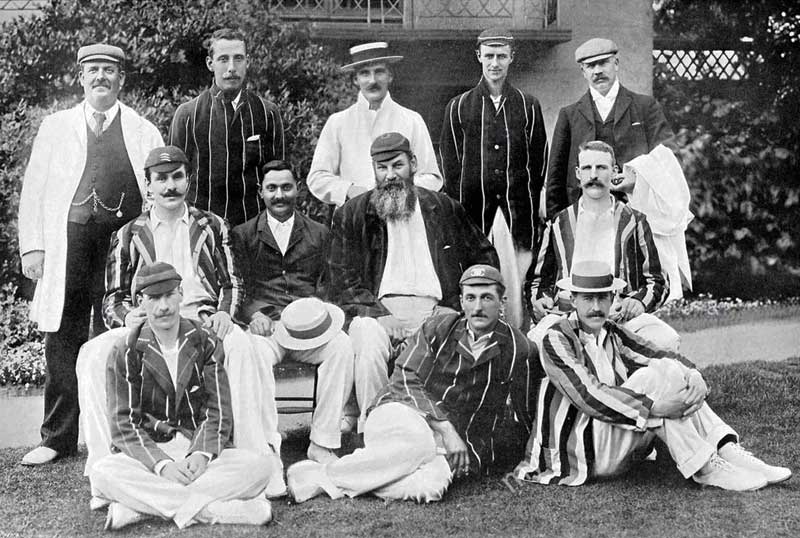 WG Grace, centre, with the Gentlemen XI for the fixture vs Players at Lord’s Cricket Ground, 1899, public domain, via Wikimedia Commons

In later life, when he grew (literally) into the pot-bellied genius of caricature, he wouldn’t have been leaping over any hurdles. Apparently, there was no horse strong enough to support his weight. With his full black beard, he marched to the wicket looking every inch like Little John from Robin Hood stories but armed with a cricket bat instead of a staff. In the hands of the gargantuan Grace, the bat must have resembled a small toy. He peaked at a roly-poly 22 stone and has been dubbed ‘the beard that was feared.’

And what sort of a man was Grace? He was undoubtedly a family man and adored his children, plus he could be rather generous on occasion. Not all his traits were as attractive, however, as he was a bit money-oriented, displayed a sense of humour that might be described as ‘bluff’ and was most tenacious when it came to winning, employing any ruse possible to upset an opponent, to the point where it might be deemed ‘sledging’ today.

That lack of ‘grace’ from Mr Grace was best exemplified by the famous story of him being dismissed three times in three balls. He stood his ground and refused to walk when given out leg before, then caught, but had his options removed with his stumps when he was clean bowled.

Another, possibly apocryphal tale, had Grace given out LBW, but admonishing the umpire with the words, “They came to see me bat, not you umpire.” Presumably he carried on batting… Touring became part of the game in the Grace era and he found himself exhibiting his talents in Canada, the United States and Australia. His first tour of Australia was over the winter of 1873-74 when Mrs Grace tagged along for a cricketing honeymoon. Showing that mercenary nature, Grace managed to extract a fee of £1,500 (more than £150,000 in today’s money). On his second tour (1891-92), one-fifth of the cost of supporting a 13-strong team went directly to Grace. Those tours would have gone off without incident. Compared to today, when it seems curfews might need to be imposed to prevent players over-indulging and misbehaving, Grace liked nothing more than a game of whist for winding down. It was, of course, a different era. 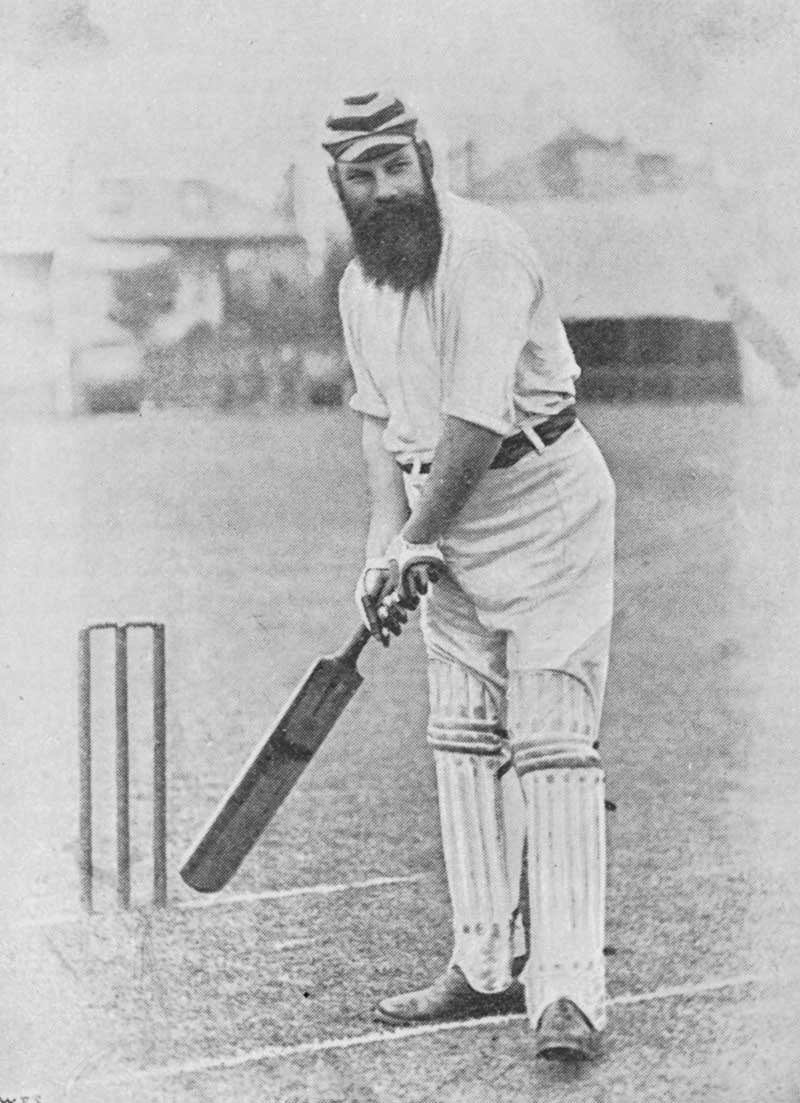 Grace achieved a notable milestone in 1895, by which time he was in his early 40s, when he scored his hundredth century. The tribute (benefit) that his fans subscribed to in that year was considerable, coming to more than £5,000. This was in recognition of his services to the game. Just for the record, that’s a sum equivalent to over £600,000 in today’s money. He also received a letter of congratulation from the Prince of Wales, the future Edward VII.

On two occasions he captained the England team, and at the age of 50 he was still good enough to open the batting for the team.

Grace died on 23 October 1915 of a cerebral haemorrhage, aged 67. In a first-class career spanning 43 years, this single man had revolutionised cricket and the art of batting. With his towering bulk, Grace was a larger-than-life character, tailor-made to bring the game to a wider audience and make it England’s summer sport of choice. It was Grace who enabled the transition from village green to international stage. While his girth increased in middle-age, he may not have been the epitome of athleticism, but he came to rely on power rather than aesthetics, which no doubt pleased the crowds. He wafted his bat around as though he was about to poke the fire, then sent the ball flashing over the boundary.

A mark of the man’s celebrity is the fact that he is so well-known by his initials, even today, over 100 years after his death. Can we honestly say the same of many others?

Featured image: DOCTOR’S ORDERS: The mural at Stapleton Road railway station showing Grace in batting pose, with reference to the Easton Colliery Blast in 1886 where he assisted as a doctor. Grace’s medical practice was based on the same road