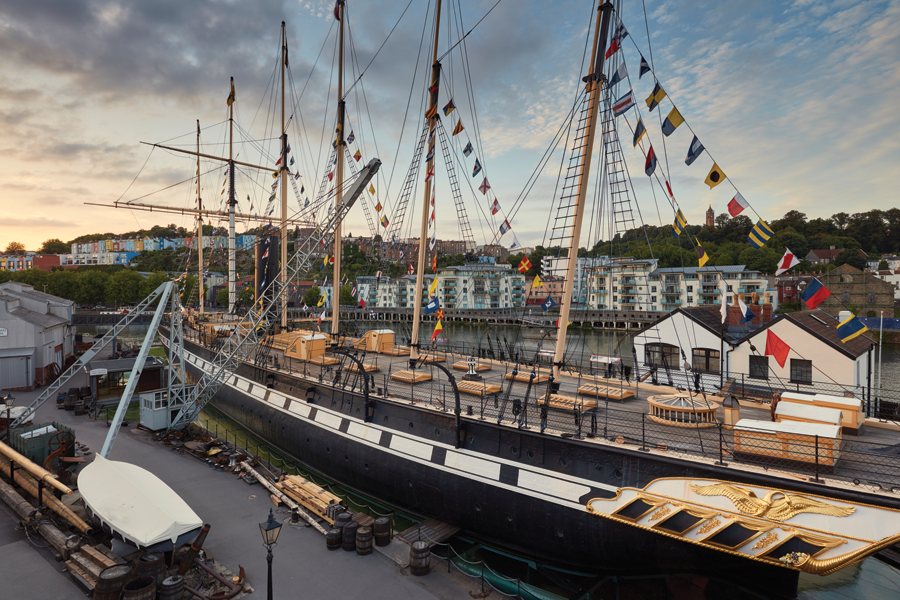 When the ss Great Britain was launched in 1843, it was hailed as one of the most significant innovations in maritime history. The ship was fitted with a powerful steam engine, and engineer Isambard Kingdom Brunel created a screw propeller that had never been seen before on ocean-going ships.

The Great Britain transformed the way people travelled and where they could travel to, connecting countries and populations from all corners of the world. And for around four decades from the second half of the 19th century, the ship acted as a passenger vessel, transporting people from British ports to up-and-coming cities like Melbourne and New York. With news of the discovery of gold in Australia in 1851, British families snapped up tickets to sail on the Great Britain in the hope of making their fortune on the other side of the world. 17-year-old Allan Gilmour made the long journey to Australia in 1852 with his brother and father, in the hope that they could set up a commission shop and benefit from the gold rush and make a life for themselves in Melbourne. The Gilmours were passengers in steerage (third class), and Allan kept a diary which describes the conditions of their living quarters during the journey, which would often take more than two months at this time.

“Our berths are pretty well ventilated, but very confined and dark,” he wrote. “The distance between our berths…is 2ft broad and 6ft long, so confined that only one can dress at once, and even in this small space we have to build part of our luggage.” This crew photo was taken at sea on a homeward voyage from Melbourne Australia to Liverpool, by passenger A.E.Rowland circa 1874

As you explore the present-day ship, you can feel just how crowded it must have been for up to 630 passengers and 140 crew to be squeezed into these cabins for weeks at a time. The ship’s museum curators and interpretation team have designed the different class cabins so visitors can get the real sense of how people lived on board, recreating the size of the beds, the wash basins, and even adding the sights and smells that were once present there.

In anticipation for their arrival in Australia, Allan wrote about how many people on board were preparing for making a new life, while also finding activities in order to pass the time. “The passengers for the most part are now busily engaged, a number making tents, hammocks, and some handles of picks, poles of tents etc,” he wrote. The ship’s museum curators have recreated the size of the beds, the wash basins, and even added the sights and smells once present there

Another way to pass the time and maybe make some money was through betting, which seems to have been popular on board. Allan describes the great expense that people were risking this way: “Considerable sums have changed hands, one person having lost £500 and another £120,” he said. “A great number of rings are also being raffled, among some of which are a gold watch…rifle, double barrelled gun…”

Allan’s trip to Australia was cut short however. His father died of dysentery shortly after they arrived. With no money to their names, Allan and his brother made the long journey all the way back to England without the fortune they had set their eyes on. In later life, Allan did, in fact, make a life outside of England by moving to Atlanta City in America.

While many passengers were anxious about what lay ahead of them when they arrived in a new country, determined to build a new life there, others travelled for much more recreational purposes. Edward Mills Grace, brother of the more well-known cricket player W. G. Grace, was on board the Great Britain in 1863/4, destined for Australia. The reason for his journey, just like his brother, was to play cricket for England against the Australian team. Grace made the most of his time on board and noted in his diary about taking part in the considerable amount of gambling, drinking and games of draughts taking place. And determined to fit in some practice, he also wrote about playing cricket on the top deck. One anonymous diary writer noted: “We have got on board the ‘Eleven of all England’ (cricketers) going out to play the Australians, they practice sometimes on deck which affords some amusement.”

Grace clearly thought quite highly of himself and his position as a cricketer, writing in his diary in October 1863: “I appeared for the first time today in my white cap and canvass boots with the red tips which both together created quite a sensation as you may imagine.”

Stuck in such confinement for weeks at a time left little space for great deal of exercise. Grace noted that one of the ways passengers exercised was to walk up and down the top deck for miles at a time. “It [the time] does go most dreadfully slowly and I cannot study,” he said. “If I go on deck there are so many people keep walking up and down, if down in the saloon there is the same objection. They are making the same noise over head and walking about and talking in the saloon…” For those in the first-class cabins below the top deck, the continuous noise from this would have been insufferable.

Owing to the long journeys the Great Britain experienced over the years, it was almost inevitable that events such as births and deaths would occur on board. Some pregnant women went into labour during their travels. This would have been incredibly dangerous for both mother and baby, just as it would have been on land at the time. With only one surgeon on board and a lack of medical facilities at hand, it would have been a challenge if medical complications came apparent. On occasions, the celebrations for the birth of a baby turned to heartache. In July 1866, Susan Mary Crompton wrote: “Mrs Austin’s poor baby died about 10 o’clock, she has been very ill all this week and early this morning she was seized with convulsions which continued until she died…”

There are even some suggestions that suicide may have taken place on the Great Britain. Susan wrote a few days later: “Last night a poor man was lost, he was seen about 12 o’clock but no one knows anything of him since it is supposed that he jumped overboard. He has been very quiet and melancholy ever since we sailed…”

In addition, one morning in November 1872, panic set about the Great Britain as it was reported that the ship’s much admired Captain Gray had disappeared. Captain Gray was a popular character, who served on the Great Britain for many years, and the mystery around what happened to him even made front-page news. There have been suggestions that he was unwell at the time, but the reason for his disappearance continues to remain unsolved.

For many on board, their monotonous days would have been dictated by what they ate and when. Feeding up to 630 passengers and crew would have been a military operation for the chefs, especially on long journeys to Australia. One list from 1864 notes that the ship carried one cow, three bullocks, 150 sheep, 30 pigs, 500 chickens, 400 ducks, 100 geese and 50 turkeys for consumption on just one voyage – plus all of the food needed to feed these animals had to be brought on board as well.

Some passengers certainly ate well on their travels. In 1852 J. M. Hardwick noted in his diary: “Dinner was first rate, quite such as you would get at the best hotels: soup, grouse, pigeon and veal pies, pork, ham and other meat dishes, sundry puddings and tarts and jelly, blancmange, cheese, celery and after all a dessert.” They certainly didn’t go hungry, or thirsty for that matter. “The ship’s bar stocked wine, spirits and porter,” Hardwick continued. “The high bar bills did not suppress a thirst and many passengers spent their voyages the worse for wear!”

While life on board the ss Great Britain back then would have often been tiresome, frustrating and cramped, it seems at other times it was almost certainly light-hearted, amusing and even enjoyable. ■

If you fancy your hand at volunteering or dressing up as a Victorian passenger, the ss Great Britain is looking for volunteers to join the team; ssgreatbritain.org