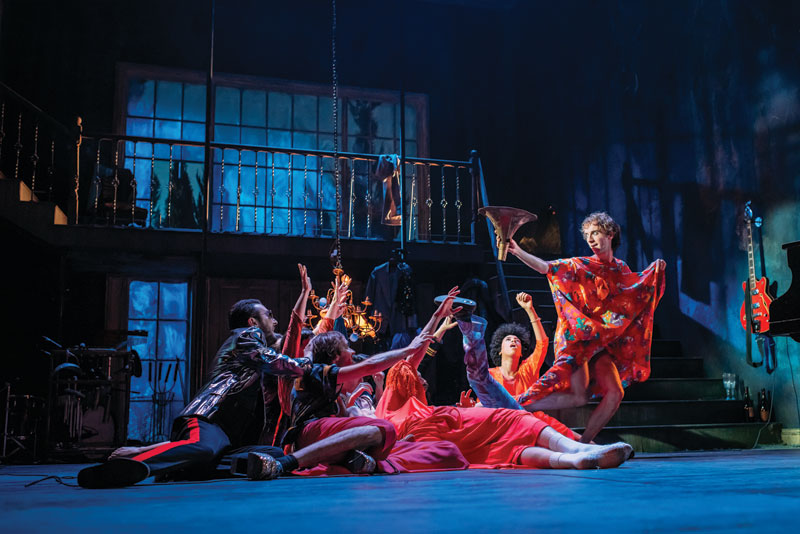 The Lyceum’s latest creation to arrive at Bristol Old Vic is a melting pot of Sixties and Seventies-esque, Warhol-tinged colour, passion, indulgent psychedelia and debauchery that the Bard would be proud of – a perfect pre-festive treat

The season to be sybaritic has kicked off in style on King Street, where a “hedonistic house party” (The Guardian) is being hosted by director Wils Wilson and co at the city’s newly revamped theatre until 17 November. The theatre-maker’s take on Twelfth Night has been inspired by 20th-century pop culture’s most decadent decades and all of Bristol is invited to indulge in the magical, raucous revelry with Sebastian, Orsino, Viola and the rest.

If the idea of “Shakespeare on steroids” (fave sound bite from audiences so far) rings your bell, and a vibrant classic-meets-contemporary score by Welsh Music Prize winner Meilyr Jones, here’s more from Wils and the big, bohemian production’s designer Ana Inés Jabares-Pita…

What was the thinking behind the 1960s setting?

Wils: I would rather describe it as inspired by that era, than set in that particular period. Some plays are written realistically and need to be very precise in terms of time in every detail of the design, behaviour, conventions and manners, but Shakespeare was not writing in a realistic genre. His plays are emotionally true and grounded in an incredible instinctive understanding of human relationships and behaviour, and he turns a very piercing eye on how people live together, how we treat each other. The late ’60s were inspirational to me because this was a time when hedonism was celebrated, when the strict codes of dress and behaviour of the ’50s were being challenged in mainstream society. Boundaries were being pushed and the performance of gender was suddenly under debate. People complained they couldn’t tell if young people were male or female as hair and fashion transformed. Also, music was central to everything. In the play you can feel the same energy, a similar spirit of experimentation, where you can ‘play’ at being someone or something else, and by doing that you can surprise yourself and find out a bit more about who you really are. 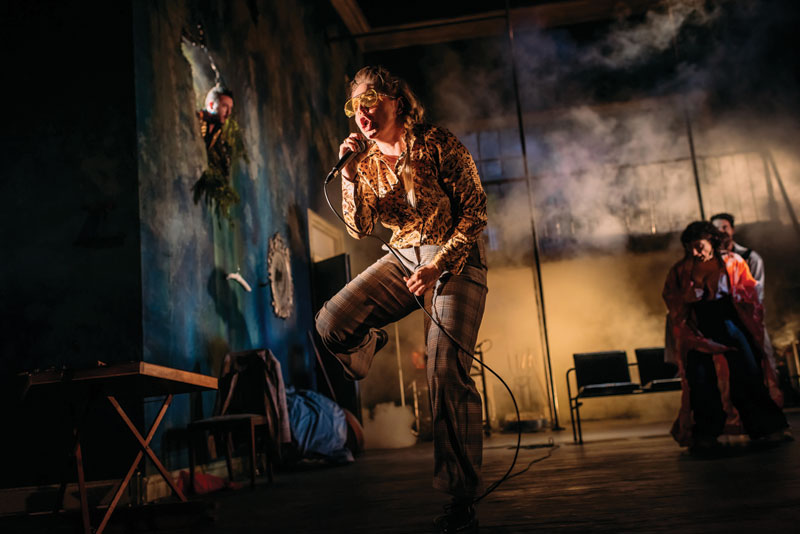 How are the play’s key themes tied into the Summer of Love period?

Ana: The main theme for us was gender fluidity and identity and the relations between characters. The idea came from some amazing pictures we found from Andy Warhol Factory parties. It was amazing to see the mixture of exceptional characters sharing a space in an abandoned warehouse, partying for hours. This inspired us to create a space where people were free to be who they were and, at the same time, change and experiment. In our party, everything is allowed! We still relate to each other in similar ways, and luckily there is more openness and awareness nowadays about gender fluidity and identity, that is why Twelfth Night feels absolutely contemporary. 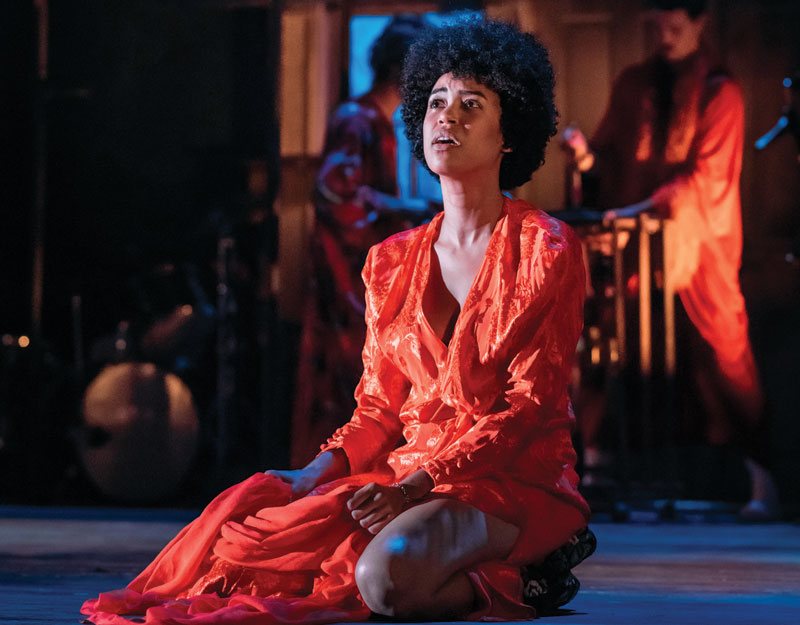 How has this production addressed these themes, such as the use of female actors in male roles, changing Sir Toby to Lady Tobi etc?

Wils: Another important inspiration for me was the current revolution in mainstream society which is giving many young people in particular the opportunity to explore gender, sexuality and identity in new ways. Just like in the play, it seems to me that the younger generation has a lot to teach the older generations. I always knew I wanted to complicate the final ‘line-up’ of couples at the end. In the original, the exploration of gender and sexuality stops when the Twelfth Night party is over, but in the world we have created, I hope a rich complexity is part of the final picture and continues into the future.

How did the traditional concept of the Twelfth Night of Christmas influence the party feel of this production?

Ana: Until I did some research I wasn’t aware that Twelfth Night was what we call in Spanish ‘Noche de Reyes’. In Spain it is still a very important date, and depending on how your family celebrates, it is more important than Christmas Day; it’s also when we exchange presents, or the three wise men and their camels leave them for us next to the fireplace… In this show the party has been going on for days. As far as I understand, this period of time was also a time for excess, hard drinking and lusty pursuits for Elizabethans. 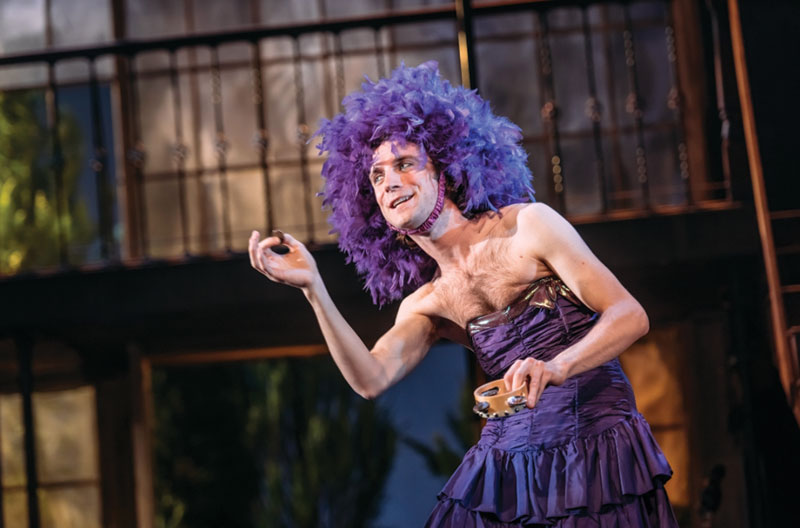 Why is the play set in a dilapidated house?

Ana: When I design usually I start from the set, but interestingly enough this time what was clearer were the characters and costumes. Finding the right space was a little more complicated to approach. The images we found of 1970s afterparties seemed to be in abandoned houses – you could see the sofas were old and the tables improvised with pallets. That is how we got to the idea of an old mansion taken over by artists. Since nature is so important in Shakespeare’s plays, I felt that it was right to set it in the middle of a forest – quite isolated – and also enjoyed the idea of it being taken over by nature over the years. “And thus the whirligig of time brings in his revenges…”

“…In the Sixties, boundaries were being pushed and the performance of gender was suddenly under debate…”

How would you describe the role of music in the play?

Wils: Music does not have a single role in the play. It is a ‘simple truth’ as Feste says, a reminder of a time when life seemed simpler and more connected to the natural world. (Even the Elizabethans looked back to the ‘good old days’!) It brings people together in good times, for dancing and celebration of being alive but also to forget death in hedonistic oblivion. It’s also a form of rebellion and anger for Lady Tobi against Malvolio’s strict house rules. It is an expression of emotion for Orsino and a comfort to his unhappy and restless mind. It is a way to grieve and remember. Much of the music in this production was ‘written into’ the play by Shakespeare (he even provides lyrics to Feste’s songs) and we have also explored new moments through music as well. Meilyr, the composer, and I talked a lot about the play and he brought lots of ideas into rehearsals. He worked very closely with Dylan Read, who plays Feste, on the songs, trying out different ideas and instrumentation. Meilyr’s music is a beautiful and unusual combination of pop and classical feels; it is layered and detailed and also very accessible with great melodies. 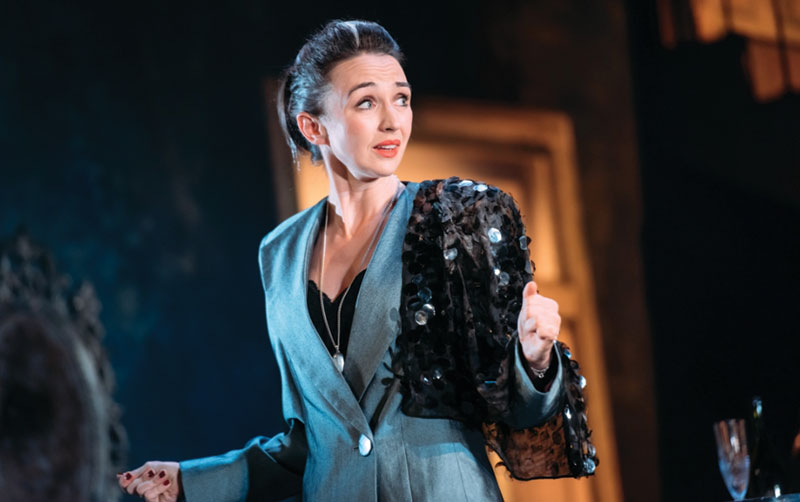 Are there any particularly unusual instruments featured?

Wils: Meilyr loves unusual instruments so there is an incredibly wide variety in the production, some of which of I have never seen before, like pipes recycled from an old organ and some percussion made especially for the show by an amazing instrument maker called Giles Leaman. We also use drum kit and guitars for the more poppy moments, there is a zither and dulcimer which gives a very Elizabethan feel to Orsino’s palace, and one song has lots of hand-held percussion which feels ancient and almost ritualistic. It is a real musical feast and we have so many talented musicians in the acting company – everyone sings and plays.

“…Music brings people together in good times, for dancing and celebration, but also to forget death in hedonistic oblivion…”

Tell us more about those fabulous costumes…

Ana: Creating them has been lots of fun! There is a wonderful costume department at The Lyceum and we all love sequins, shiny patterned fabrics and rock and roll! Although the inspiration started with the ’60s, we moved forward in time to when parties were slightly wilder and costumes were too. The ’70s and early ’80s would allow us a more vibrant palette and we could have more fun with fabrics too. Also there are so many super interesting pop and rock icons to take inspiration from: Grace Jones, David Bowie, Diana Ross, Mick Jagger, Debbie Harry, Elton John, Freddy Mercury. The list is very long if you see the costume research… 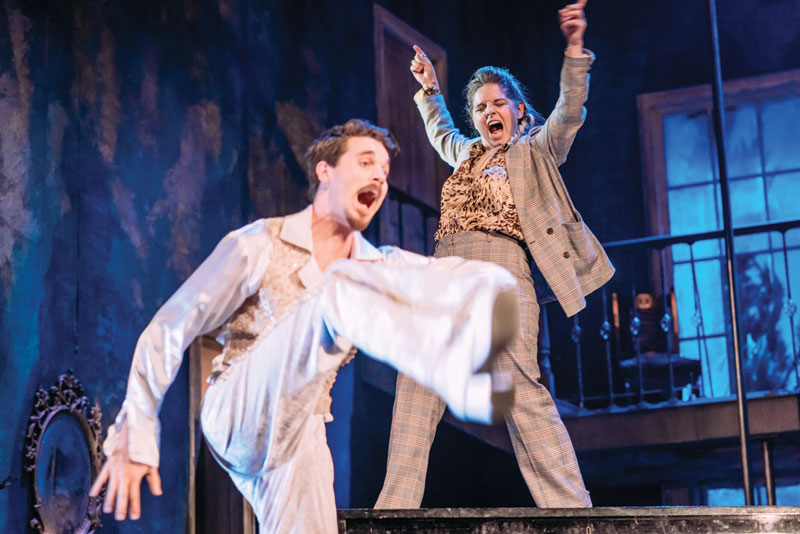 What can audiences expect from Malvolio’s costume in the famous yellow stockings scene?

Ana: I think it is better to leave the audience to guess which character has been inspired by which rock star; but some of them are quite obvious. The designs for Malvolio’s costumes came from a close collaboration between Christopher Green, Wils and myself. It needed to be a drastic change and over the top without being ridiculous and still have coherence with the rest of the costumes.

How does this production coincide with Bristol Old Vic’s theme for the year – #YearOfChange?

Wils: It really is a play about transformations. Every character goes through change – most of it happy, some of it extremely painful. Everyone is changed by the end of the play, and I hope the audience will be too.

Next
Cary Grant: More than meets the eye