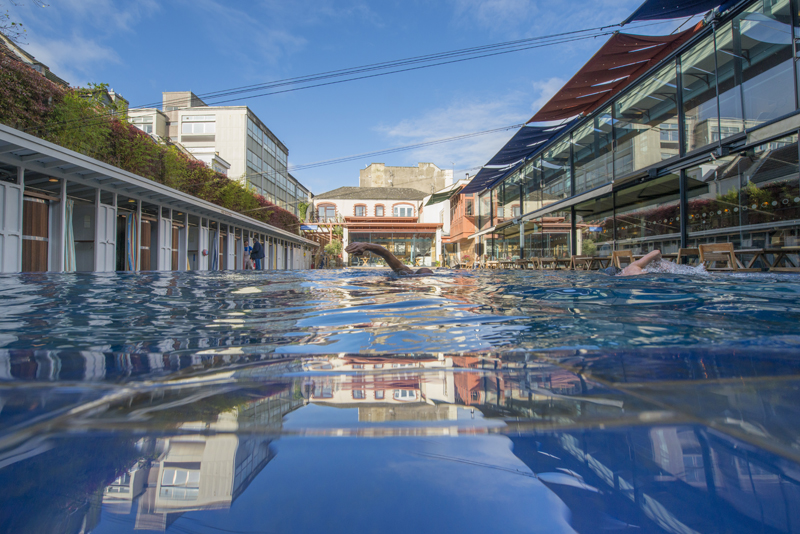 Taking the waters: The history of Bristol’s lidos

Bristol Lido follows in the footsteps of the grand Victorian health spas. Jess Connett charts their ebbs and flows

Over the last 150 years, the fashions for bathing in Bristol have changed with the tides. Now a chic spa with an outdoor pool, Bristol Lido was built in 1850 as a washing facility for Clifton residents. At the turn of the 20th century the baths were combined to create a municipal swimming pool that filled the footprint of the building. Hazy colour prints show it 70 years later painted duck-egg blue, with a sun terrace and Hockney-esque water. Now, with a second sauna currently being built poolside, the Victorian spa fashions of its time are coming full circle.

“The Turkish bath must, sooner or later, revolutionise the so-called medical science of the world,” Charles Bartholomew told physicians from Bristol General Hospital in 1866. Ten years earlier he had brought the Turkish-style sauna to Bristol, having himself been cured of gout by the dry steam. His first effort in Bedminster was short-lived, but his second, within the former Great Western Hotel on College Green, endured for 100 years. By the time he died, Bartholemew owned a steam bathing empire of which Bristol was the jewel in the crown.

It was no sterile leisure centre. Opulent rugs covered the tiled floors of the chilly cooling room. There were hot and cold plunge baths, a gymnasium, a swimming pool and “an excellent reading room with all the London and provincial newspapers,” Bartholomew boasted in an 1865 advert.

He fervently believed in the power of his baths to cure the ailments that plagued city-dwellers. With 50,000 people passing through the doors within 11 years, by the time he addressed the doctors he had collected testimonials from some 800 bathers, who swore it had cured their rheumatism, sciatica, and even blindness. “I went to Mr Bartholomew’s bath with crutches, and after a few baths I could dance a hornpipe,” General Sir Abraham Roberts of Royal York Crescent reportedly wrote.

The supposed curative powers of Bristol’s waters were nothing new. For centuries, sailors had drunk from a warm spring that bubbled out of St Vincent Rocks in Hotwells, believing it warded off scurvy. The spring was enclosed in 1630, and by 1696 the first elegant spa house was built on what is now the Portway. Only its curved colonnade survives beside the thundering traffic. Initially the niche of the well-to-do, as reports of health benefits for diseases including diabetes and consumption (tuberculosis) multiplied, so doctors began recommending the terminally ill take the waters. So many visitors died in Hotwells that in 1787 a new graveyard had to be dug – Strangers’ Burial Ground on Lower Clifton Hill.

Sea bathing put the spa out of fashion for a few decades, but in 1898 Clifton Grand Spa and Hydro Hotel was built as an attempt to revive it. In the ornate pump room near the top station of Clifton Rocks Railway, the water was piped in and could be drunk from a fountain. Beneath what is now the terrace of the Avon Gorge Hotel were Russian and Turkish-style sauna baths decorated with stained glass windows, marble pools hewn from the rock, massage rooms, shallow wave baths, and poultice pits.

Advances in the understanding of disease contributed to the declining popularity of Hotwells’ spa water; as did testing of the water in 1912, which showed it was more than 100 times more radioactive than the normal supply. More leisure time led to the outdoor swimming heyday of the 1930s, when Clifton’s lido became the first in the UK to be electrically heated by metal elements, like a giant kettle. Through the 1960s it was a place to play games in the shallows and meet people – quite the opposite of the dedicated swimmers ploughing up and down the pool today.

After its popularity waned in favour of big indoor pools like Horfield Leisure Centre in the 1980s, the lido closed. It may never have been reinvented as a spa had wild swimming not been coming back into favour around 2005, when founder Arne Ringner bought the site.

“I thought we could put some big fish in the pool,” he says, looking down at the sparkling water from the big first-floor windows of the restaurant. “I thought it would look quite exciting – you could sit up here and watch some sharks slowly cruising around. It was only when we started work that we thought people would pay money to swim, rather than having to hire in the fish.”

The spa has developed under the guidance of general manager Mark Thwaites, and in the decade the lido has been open, a community of people has grown around it. “I think I’ve become very aware that this form of activity does have much greater properties and function than just coming here for the day,” says Arne.

“A great number of people come up to me and say, ‘if you were not here I would have left Bristol a long time ago,’ or ‘I moved to Bristol because of this’. It has become a very important part of their lives. It’s a community oasis.”

Featured image: Bristol Lido (image by Andre Pattenden). Through the 1960s it was a place to play games in the shallows and meet people – quite the opposite of the dedicated swimmers ploughing up and down today