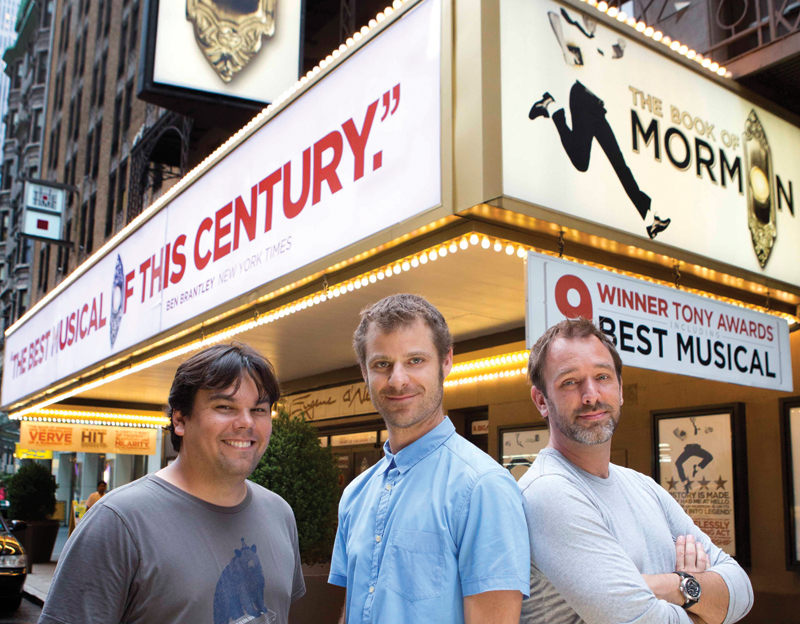 The Book of Mormon: Interview with the creators

From Oprah Winfrey to Osama bin Laden, many have been subject to the South Park scalpel over the years. Say what you want about its creators, but nobody gets left out when it comes to their sharp satirical treatment – and the success of their musical The Book of Mormon has surprised nobody more than them. Words by Louis Wise

To get a flavour of The Book of Mormon, you could do worse than look at one of the musical’s early numbers, Hasa Diga Eebowai. The song acts as a kind of welcome to the show’s heroes, two naive young Mormon missionaries sent to Africa in order to spread the word. On their arrival, the locals in a Ugandan village embark on a sunny, jolly song, heads up to the sky in full Lion King-style. There’s only one rub, though: the villagers aren’t asking them to feel the love tonight.

This is actually one of the safer numbers in the show, which has both shocked and delighted audiences (often at the same time) since it premiered in 2011. To fans of the creators – Trey Parker and Matt Stone, the dark geniuses behind South Park, and Robert Lopez, the man who gave us the equally smutty Avenue Q – this is a kind of heaven. But here’s maybe the most shocking thing about The Book of Mormon – despite its tackling of all taboos, it has had very few detractors at all. In fact, it has become one of the most loved and lovable shows of the decade, with nine Tony Awards and four Olivier Awards to its name.

…The truth is, we had imagined it would be controversial, and we hoped that it would run a year…

“The truth is, we had imagined it would be controversial, and we hoped that it would run a year,” says Lopez in his New York writing studio, where he is working at songs for Frozen 2 (it’s him and his wife, Kristen Anderson-Lopez, who gave us the songs from the first Frozen, including Let It Go). As it looks set to be happily welcomed on a tour of the UK and continental Europe, after stints all across America, Canada, the West End and Australia, it’s clear that neither thing ended up true. Lopez chuckles as he recalls the one person he saw walk out of the show, in its early previewing days. “She threw her playbook down and grabbed her things and marched out – like, ‘Everybody’s coming, right? This is too much!’ But no-one followed her out.”

How did it happen? From the moment the trio plumped on Mormonism as a subject, people panicked that they would be headed straight for a howling scandal. Who, in their right minds, chooses to send up a whole religion in a Broadway show? Yet that’s not what they ever set out to do, they explain. The piece is actually born of a shared fascination, even a love, for the Church of Jesus Christ of Latter Day Saints, which the trio discovered when they met one evening after Parker and Stone had been to see Avenue Q, all the way back in 2003. Over a drink, they asked Lopez what kind of stuff he’d like to do next, and he nervously revealed his niche interest. “I said, ‘I want to do something on Joseph Smith’”, he remembers. “And they said: ‘What? That’s what we wanna do too!’”

Mormonism may seem a surprising obsession for a bunch of comic geniuses, but not with a little context. Parker and Stone grew up in Colorado, after all, just one state away from the Mormon heartland of Utah. They always knew Mormons – Parker’s first girlfriend was one. Today, sat in the LA studio where they still make an episode of South Park every week during the season (it’s been airing for or 22 years), it’s logical, they say – whereas Lopez’s fascination is not. “For us, it was next door, but he grew up in New York City,” frowns Stone.

Lopez was drawn to the story of Mormonism after reading about it in history lessons in Brooklyn. It has to be said that there is something delightfully surreal about the founding myths of the faith – as with perhaps those of any faith, if you view them under a certain light. But Mormonism was close to home, and closer in time. In the early 19th century, the young Joseph Smith claimed that he had been visited by the Angel Moroni, who had presented him with two golden plates – the original Book of Mormon – detailing, for instance, a long sejour by Jesus in America. Oddly enough, Smith was the only man ever to see these plates (they are apparently still buried somewhere), but the story soon took hold. “I remember reading about Smith in an American history textbook in eighth grade and just having to read it twice, because I couldn’t believe what I was reading,” admits Lopez.

There is plenty of humour to be had, then, as the two teen missionaries, Elder Price and Elder Cunningham, bounce blithely into Uganda with a very Mormon type of naiveté – only to be faced with its grim realities. That isn’t so much about laughing at a religion, though, as finding the comic potential in the culture clash. “It’s specifically a Mormon thing that when you’re 18 you get paired with someone who’s your sudden ‘best friend’, and sent somewhere crazy in the world,” points out Parker. “And we were like: ‘that’s a musical’. I mean, forget the religious part – that’s why it had to be Mormonism.”

And it was their attachment to the faith which meant they could develop a fully-fleshed show around it, adds Stone. “I just thought, with our fascination with Mormons, and our history, we could write that musical. Someone else could write one about some other religion really well but we wouldn’t.” The two are a little exasperated by an old criticism of the piece, that it didn’t pick a slightly more contentious religion to parody – Islam, for example. “It was already so loaded,” reasons Parker. Also, says Stone, they’ve always been equal-opportunities offenders. From Osama bin Laden to Oprah Winfrey, no-one has avoided the South Park scalpel over the last 20 years. “By the time we made The Book of Mormon, we’d already been in hot water with like three other religions,” Stone says. “People said, ‘Oh, they wouldn’t have made this about another religion.’ We chose this, but we’ve done a lot of religious subject matter.”

If the religion’s surreal stories did obviously appeal to their sense of humour, it’s about much more than sniggering at it, says Lopez. Each is under no illusion about religion having it pros and cons, and to not acknowledge that would ultimately have made the show less humane.

“People are so quick to laugh at Mormons,” says Lopez, “but we wanted to be able to turn it around on them in the end. Because really, any belief in anything impossible is sort of funny, but also very inspiring and empowering. And I think that’s why the songs sing so much.”

Stone echoes this, pointing out that the show does present a journey of discovery, for the audience as much its characters. “There is an element to comedy that is ‘laugh at these people’,” he concedes. “And The Book of Mormon uses that mockability of them, and then tries to tell a larger story, to rope you in and open it up. Laughter breaks down your defences, you know? And then you’re open to a different story.”

…People panicked that they would be headed straight for a howling scandal. Who, in their right minds, chooses to send up a whole religion in a Broadway show?

That said, you might expect Mormons themselves to not get the joke quite as clearly. “Everyone beforehand said; are you worried? And we said no. Because we know Mormons. Mormons are nice people and they’re smart people. We didn’t think they’d go so far as to take ads out in our programme,” he admits. “They trumped us, really.” Indeed, the Church of Latter Day Saints decided to use the show’s immediate popularity as a platform to further spread the word. Adverts in the show’s literature pointed you politely to the actual, real Book of Mormon, in case the musical had whetted your interest. Parker and Stone can only applaud. “The official Mormon response was exactly how we all in a liberal society would like a religion to respond to that,” says Stone. The church put out a statement pointing out that the First Amendment which allows the church to do what they do, is the same that lets the musical do what it does too. As Stone points out, they even played Salt Lake City, the capital of the faith, and the show sold out. “And there were a lot of Mormons there.”

The reason the show dodges scandal is, in part, sheer skill – the charm of its tunes and the sharpness of its humour. The gags might be outrageous, but they are skilfully built in, one layering on top of the other. It almost amounts to a philosophy for the South Park duo. “Humour is how we deconstruct the world,” says Stone. “It’s what a lot of not-funny people don’t understand,” adds Parker. “They don’t get that funny isn’t a tool to attack – it’s a tool to process a thing, and to communicate. I think the most profound things I’ve ever heard about life have come out of a comedian’s mouth.”

But the success is also down to the show’s heart. The most profound gags are often at their own expense. Here are three men who, after all, were as cocky as the Elders once were. Each has had to learn a few hard facts about life – it’s just that they haven’t had to face down warlords in Uganda to do so. “It’s a coming-of-age story, really, about two kids coming out of high school and thinking they know it all,” says Parker, “and then getting their asses handed to them. And I think anyone around the world can relate to that.” Or, as Lopez puts it simply: “It goes all the way there, so we can bring you all the way back.”

Previous
Noya brings flavours of the east to Harvey Nichols