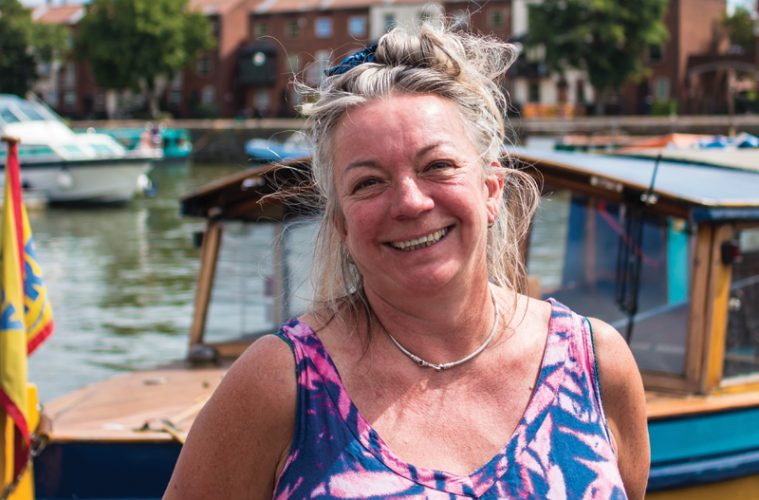 Folk on the water: boat-dwellers on the life aquatic

Bristol’s boating community is as diverse as its land-based neighbours; Georgette McCready met some of the lucky few who live and work on the water. Photography by Jacob Little

Many people enjoying a stroll along the Bristol dockside in the sunshine will have paused to admire the variety of boats moored in the Floating Harbour and thought wistfully that living on the water looks very appealing. But before you rush off and buy a Dutch barge or narrow boat, the bad news is that mooring space in the harbour and docks is so limited that Bristol Harbour Authority has had to close its waiting list to applicants.

“The residential berths are currently fully allocated and rarely become available, and no other residential use of vessels is permitted,” the Bristol harbour website clearly states. There is also a limited number of leisure, that is temporary, moorings and these too are currently running at full capacity.

But what is it like to live or work on a boat in the very heart of Bristol, so near all the city’s attractions and yet in a peaceful environment, with traffic confined to a few passing boats and ducks?

Philippa Bungard is operations manager for Bristol Ferry Boats, which she runs with her husband Ian. Ian founded the ferry company in the late 1970s and the couple returned to the business in 2012 when a dramatic bailout bid saw the five-strong ferry boat fleet bought by a group of benefactors the Bungards nicknamed The Rescuers. The story has been told, many times, of how the ferry boat business was saved and resurrected in 2013 as a community-based operation with hundreds of shareholders, which is now run with Ian and Philippa at the helm and a staff of around 35 part-time workers and 11 skippers.

Philippa has lived on boats for many years, from her early days as an art student in Banbury – before coming to Bristol at the age of 22. She is a champion of the local boating community, believing that more should be done in the city to encourage boat life as a viable and affordable option for people living and working in Bristol. 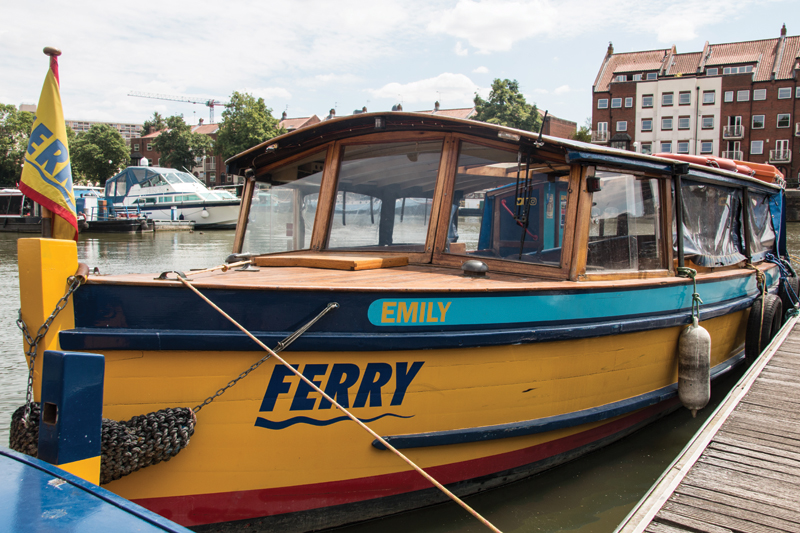 Emily, one of Bristol Ferry’s veteran wooden boats, in her yellow and blue livery.

“There’s no doubt that the harbour is the jewel in Bristol’s crown,” she says, perched on one of the Bristol Ferry Company’s veteran wooden boats, which are painted in the distinctive blue and yellow livery. “And we’re delighted that we’re now able to run an outreach programme which means we can get people who live in Bristol but would never think of coming down here, to enjoy trips out on the water. We’ve been able to bring isolated people and community groups out on boats and they love it.”

The Bungards’ current floating home is the palatial Ellen, which as Philippa says, gets many admiring glances for its colourful floral displays. “People come down to the water and they want to see all these diverse and bright boats. They love strolling along and looking at the houseboats. I’d really like to see more done to let more people live on boats. More pontoons could be put out to allow more moorings.”

Philippa’s graduate daughter Tilly was born on a boat and, following her parents’ example, has bought a narrow boat which they are all working on restoring. Tilly is going to take her boat to London, travelling along the Kennet and Avon Canal and, from there, navigating the River Thames, to a mooring in London so she can continue to work and live in the capital.

Pete Johnson, a freelance web designer, loves his city centre home, floating not far from King Street, on Welsh Back. He lives aboard a 72ft narrow boat with his dog Margot, spending some of his time working from home. 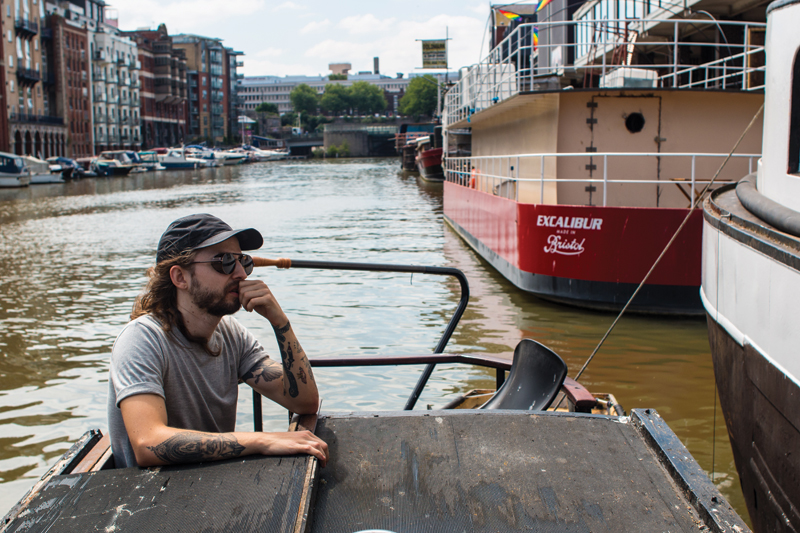 “I’ve lived on the boat for two and a half years,” he says. “I’d spent ages looking for one to rent and was lucky to find this one. A lot of people have lived on this boat before and it’s a great space with a great location. In the summer evenings I take the little rowing boat out and enjoy the freedom of being about to roam about. It’s just nice to be here, gently rocking on the water with the ducks and swans going past.

“Margot seems to enjoy it,” he says as the small dog makes her sure-footed way along the roof of the boat. “I’ve not got her a lifejacket but she’s only fallen in once and that was when she slipped on the ice on deck in the winter.” 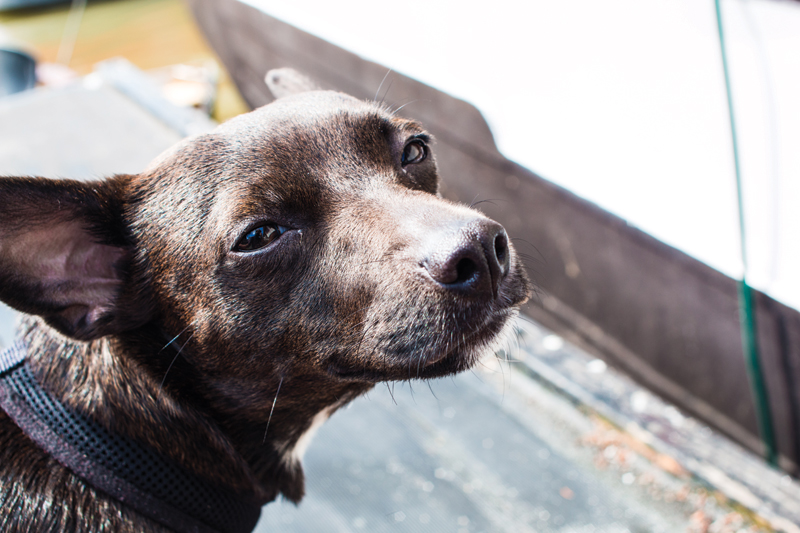 Pete likes the fact that living on a boat is cheaper than renting a flat and he finds the boating community very friendly and supportive. He sold his car and so has to have the wood delivered for his woodburning stove. There must be some disadvantages to living on a narrow boat, I ask? “Well during this summer it’s been very hot, which it would be, what with being a steel container. I just have to make sure I leave the windows open. And in winter it gets very cold. It’s quite annoying when the water pipes freeze.”

He also cites the nuisance of having a very small toilet – and it needing to be emptied – but says the advantages outweigh the inconveniences.

“We have a thing called boat time,” he laughs, having illustrated this earlier on by setting out to walk Margot, bumping into Jacob the photographer and me on the quayside and then realising that yes, today is Tuesday, the day we agreed to meet. “You get quite chilled on a boat.” 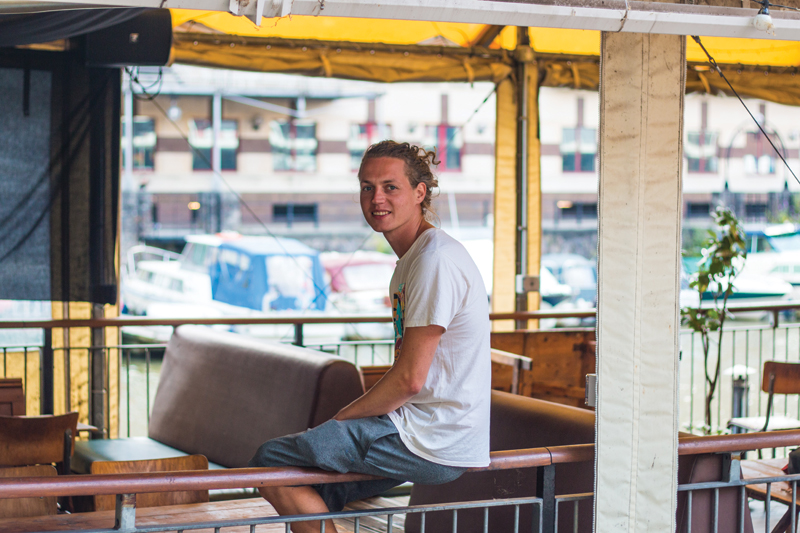 Tim Hatcher, manager of 1930s Dutch barge The Apple, which is moored up on Welsh Back

Tim Hatcher, manager of The Apple cider boat which is moored permanently on Welsh Back, agrees. He’s worked on the boat for eight years and says its location and relaxed atmosphere put customers in holiday mood. On a sunny evening, with a carefully curated and much-loved soundtrack floating across the air – visit on a midsummer weekend and you might catch the soulful vinyl sounds of DJ Nev – it’s easy to see why this laidback bar is so popular.

His onboard office is where the old Dutch barge’s engine room used to be. Now, when the boat has to be moved for cleaning or painting, it has to be towed as it can no longer move under its own steam. The vessel dates back to the 1930s and was a gentlemen’s club before becoming a bar, which explains the mirrors on the ceilings in the gents… In a previous incarnation it served as a clubhouse for Hell’s Angels and certainly the boat has a raffish charm, with its shady canvas roof, old church pews and trestle tables.

“…I’d like to see more done to let more people live on boats; more pontoons could be put out to allow more moorings…”

Not far from the Apple boat, the sound of drilling and metalworking can be heard. We’re invited onto the Excalibur, a hulk of a substantial metal houseboat, by owner Dr Tom Bailward, a GP in Montpelier. He took on the project to convert the shell of the three-year-old vessel a year ago following the breakdown of his marriage and has thrown himself into the technical and practical challenge of making a two-storey home in the space.

“I was hoping to buy a Dutch barge in Amsterdam and bring it over, but I couldn’t get permission from the Harbourmaster to do that, so I bought this, which came with a residential mooring licence. I’ve already cut a hole for a door at one end and am currently cutting to create portholes.” 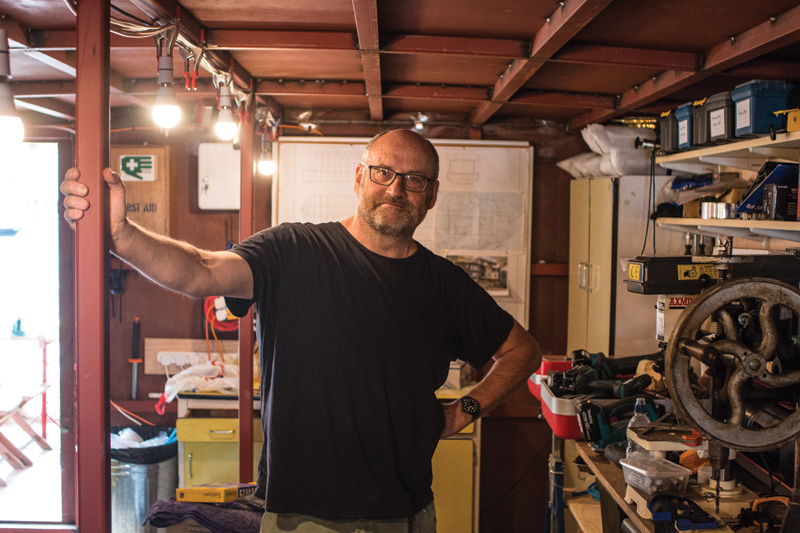 Tom says as an experienced DIY-er he feels confident about tackling many of the jobs on board Excalibur and he will enlist his daughter, an architecture student, to help with the design for the upper deck, which will incorporate an open-plan living and kitchen space, plus a conservatory where he plans to grow tomatoes.

It all sounds like a inspirational project and Tom hopes he will have it finished – complete with remote controlled electric drawbridge – by next year. One of the challenges Tom faces is the need to move the boat to dry dock every few years, and this will mean passing through Redcliffe Bridge, which has had issues over its opening and closing mechanism.

“I’m seriously contemplating designing the second storey so it can be folded down to get under the bridge,” he says, planning for the worst-case scenario.

Visitors to the harbourside can look forward to seeing the doctor’s tomato crop ripening in future summers, joining the other fascinating attractions and distractions to be found at this sparkling jewel of Bristol’s crown. 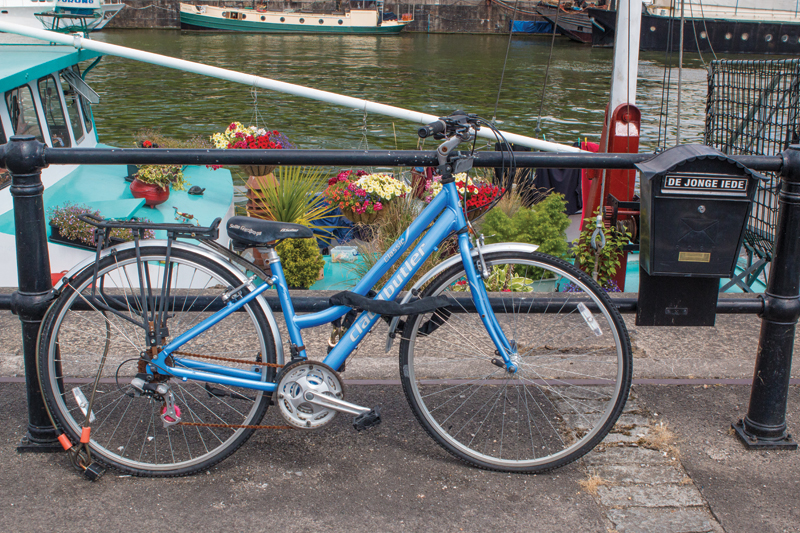 This could almost be a postcard from Amsterdam