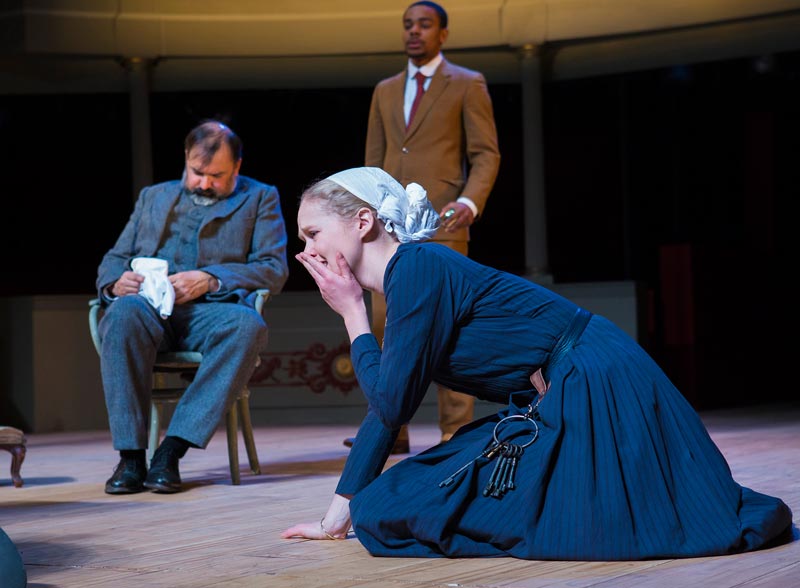 Back in November Bristol Old Vic launched its 2018 programme under the notable theme of ‘change’. From political upheavals, discussions about Bristol’s connections with the transatlantic slave trade, and explorations of social and economic hardship, the theatre will present a range of dynamic productions from across time periods, countries and scenarios that all focus on this subject throughout the year.

A brand new translation of Anton Chekhov’s final masterpiece The Cherry Orchard seems like an exemplary choice to kick off the major productions of the year. Directed by former artistic director of the Royal Shakespeare Company Michael Boyd, this production is set in early 1900s Russia and focuses on Madam Ranyevskaya, a Russian landowner, as she returns to her family estate (which features a vast cherry orchard) just as her estate is about to be auctioned off to pay for her family debts.

The play premiered in 1904, just a year before the Russian Revolution which saw mass social disorder, strikes among workers, and political turmoil across the Russian Empire. With these social changes bubbling under the surface and the feeling of uncertainty about the future in the air, The Cherry Orchard explores how aristocratic Ranyevskaya must come to terms with selling her ancestral home to the son one of her family’s serfs, who has become incredibly rich – an example of the rise of the bourgeoisie at the time. She must focus on leaving her noble life behind, as well as coming to terms with the ramifications that the selling of the estate has on the rest of her household and her family.

Despite these rather profound themes, Chekhov described The Cherry Orchard as a comedy – and I was pleasantly surprised at how amusing this production was, which added a lightness to the severity of the story. As soon as the estate clerk Yepikhodov (played by the delightfully entertaining Jack Monaghan) stepped on stage with his deliberately squeaky boots in the opening scenes, this set the tone for the production – hard-hitting at times, but with an emphasis on there always being some light-heartedness around the corner.

Kirsty Bushell is skilful as the sentimental Ranyevskaya, who’s emotions dart from sheer elation to being utterly distraught at the drop of a hat. Her absolute sorrow for returning to the spot where her son drowned seven years prior is especially moving. Yet, it is the way that she is haunted by her son’s memory as a young boy appears at the side of the stage during a raucous party that is particularly poignant. While the other guests joke, drink and lark about centre stage, it is the way that Bushell’s gaze lingers, watching her son staring back, that subtly emphasises her being followed by her grief and memories linked with the estate. 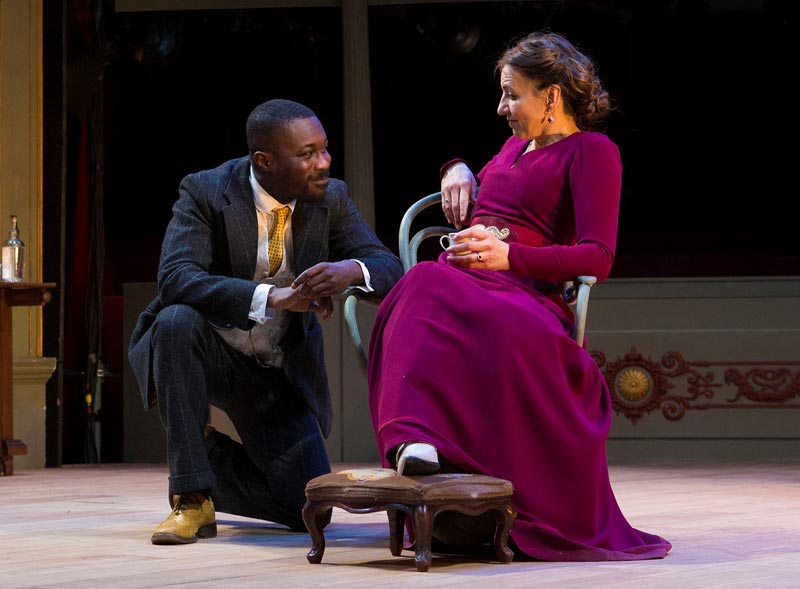 Jude Owusu is forthright and resolute throughout as Yermolai Lopakhin (the now wealthy son of the family’s serf), especially when trying to explain his reasoning for buying the estate for himself. He is determined to show how well he has done for himself, despite his ancestral connections with slavery – something that will resonate with Bristolians in regards to current conversations about the city’s links with the slave trade.

Simon Coates is wonderfully engaging as Ranyevskaya’s nonsensical brother Gayev, who had us all simultaneously laughing and rolling our eyes with his never-ending rantings about the changing world around them, and Julius D’Silva is equally hilarious as Boris Borisovich Simeonov-Pishchik, a landowner who has also fallen on hard times and attempts to charm everyone out of their money to pay off his debts.

Enyi Okoronkwo is strikingly eloquent as student Trofimov, who was once the tutor of Ranyevskaya’s son. His long philosophical speeches deploring the Russian political system, and declarations of what needs to change to make a positive impact on the whole of society, shows him to be an almost beacon of light for the future; a reflection on how society may be moving forward, away from the struggles of serfdom and the Tsarist regime.

Verity Blyth and Rosy McEwen, both recent winners of the Bristol Old Vic Theatre School Peter O’Toole Prize, are steadfast as Ranyevskaya’s daughters Anya and Varya, who are increasingly frustrated by Ranyevskaya’s flippancy with finances, yet are incredibly protective over their vulnerable mother.

This new translation by award-winning playwright Rory Mullarkey stays true to Chekhov’s Russian text – there is a frankness to some lines that you would expect from the Russian language. This is especially apparent with Yasha, the young manservant who flirts and jokes with Dunyasha (the housemaid) during the summer months, yet by autumn is cold, rude and eagerly wanting to leave Russia for the delights of Paris. Hayden McLean has a charming swagger in this role, and clearly represents the growing number of young, dissatisfied Russians looking for a more liberal (and fun) way of life in the big, bustling cities of Europe at the time.

Rather that constructing Ranyevskaya’s home, designer Tom Piper has recreated the Bristol Old Vic’s beautiful Georgian auditorium on what would be the back of the stage, meaning that members of the audience can sit and watch the action from all sides. The lack of scenery and props was a welcome sight – a simple chaise-longue and ornate drinks table was all that was needed to add a homely touch to the set.

Despite being written more than a century ago, this production emphasises just how sentimental we can be over the places we have lived, the people we have loved, and the uncertainty around change. While the majority of the characters are upset by the idea of the estate that they have had associations with for so long being sold off, it is the younger characters – notably Trofimov, Anya and Yasha – who have a positive outlook on the future.

With such apprehension around the impending political changes we face as a nation, maybe we should take a pinch of their optimism in the years to come?