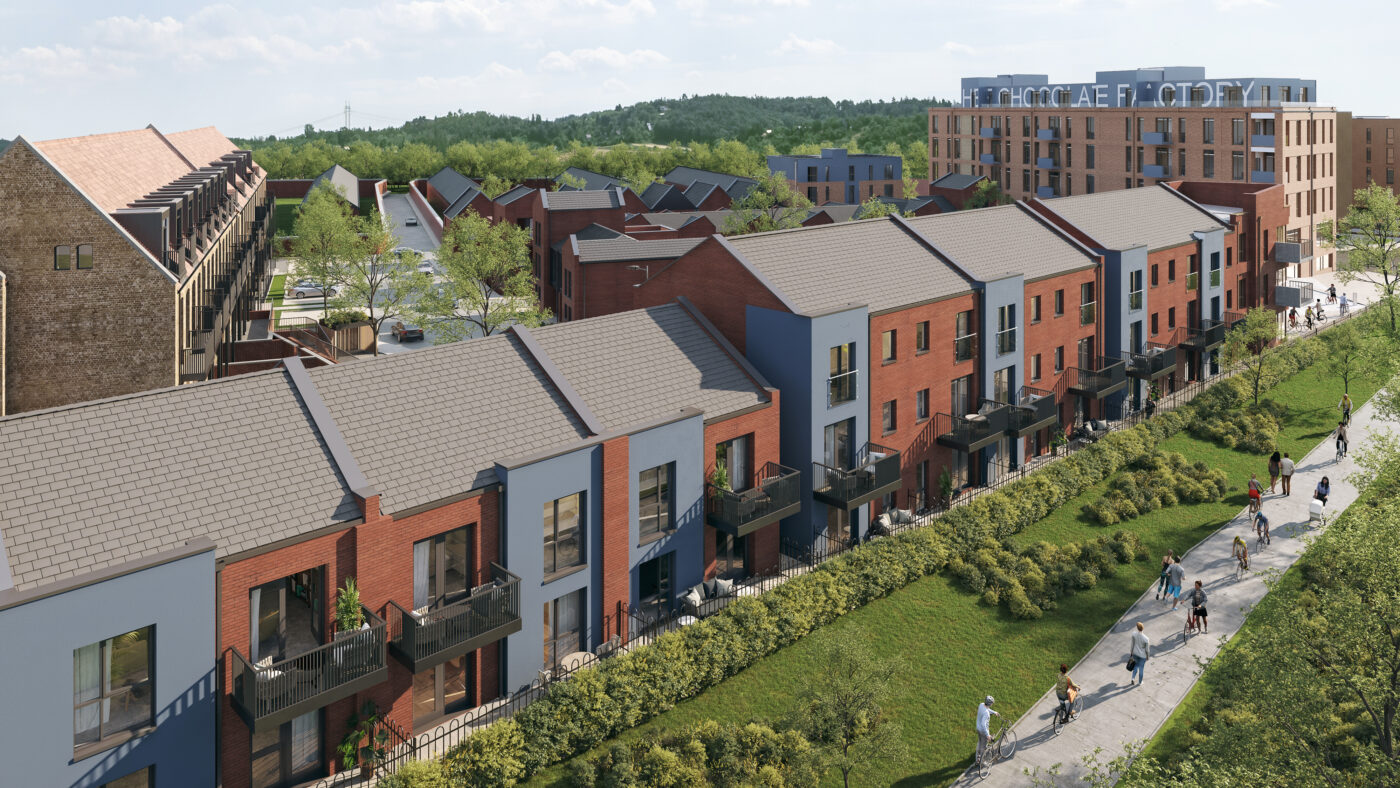 As East Bristol continues to rise in popularity we look at the hidden gem that is The Chocolate Factory – often known locally as Elizabeth Shaw or Packers – which is developing an exciting sense of community as it grows.

The place you live is not just about bricks and mortar, it is about the community that surrounds your home and the first residents of The Chocolate Factory development in Greenbank, BS5 are creating that community spirit.

When the original factory was built, the owners not only created rows of terraced homes that surround the factory but provided things such as a sports pavilion and recreational ground. Added by the owner to enhance the lives of his employees and support local organisations, the recreational ground included a bowling green, cricket pitch and tennis court.

Fast-forward 100 years and the once derelict Elizabeth Shaw factory is being transformed into new roads and homes. Those moving in are a healthy mix of first-time buyers, downsizers, families, couples, retirees and young professionals. After 16 years, they are bringing the site to life again.

Francesca, 50, who works in Epidemiology at the University of Bristol, and her husband Robin, 45, have bought a terraced home after moving to Greenbank from a garden flat in Clifton.

Speaking about her decision to move, Francesca said: “It was being part of a community that really attracted us to the area. Clifton is beautiful with nice houses but because it has a big student population people come and go quickly and there are a lot of Airbnb and rental properties, so the community does not form so well.

“Here, we have a much more diverse community, and we are already making friends. Most of the other people who have moved in are younger with families. In fact, friends we made in Clifton are now following us and moving to The Chocolate Factory.”

Francesca has been working from home a lot recently and she and Robin plan to buy bicycles so that they can take advantage of being alongside the Bristol Bath Railway Path. “It’s just a short stroll down to Stapleton Road where I get the train to Clifton Down when I have to go into the office,” she said. “My husband is a software engineer so he can also work at home at times.”

Once complete The Chocolate Factory will include 104 private sale homes and 28 shared ownership homes as well as a community hub based around the new public open square, together with retail, café/bar, and workspace units, further enhancing the community feel and breathing new life into BS5.

Francesca added: “It will be nice when the square with the local shop is completed and we are hoping there will be some nice local business and not a big chain. We would also like to see some cultural space created where people from the neighbourhood can meet together and maybe have some exhibitions.”

Those aspirations match the desires of the developers Generator South West, who are in talks with a number of Bristol based independent businesses to occupy the commercial aspect of the development. Mya Castillo, consultant for Generator South West, who herself has lived in BS5 for over 20 years, said: “Greenbank is a vibrant, established, engaged and friendly community with everything you need within a 15-minute walk or cycle ride.

“The Chocolate Factory is a regeneration of a site that was once the beating heart of the neighbourhood being brought back to life. When the Generator Group was first designing and planning the scheme, we really wanted to create a sense of neighbourhood, so to see that happening now before the scheme is even complete is wonderful.

“These properties are gorgeous but what really makes a house is the sense of home it creates and part of that is the surrounding area and all the vibrancy, camaraderie, convenience and pleasure that brings.

“Like many parts of Bristol the area has changed massively over the last decade but it is nice to see the long-established businesses like Sweet Mart and Paks alongside new openings like The Garden of Easton, The Red Church and the Lock Up – still serving some of the best Sunday roasts in Bristol. The schools have improved, and investment made in parks and the Railway Path so getting to the train station and into town is much easier. I grew up in BS6 but I wouldn’t want to live in any other part of the city now.”

Reservations are now being taken for the standout three and four-bedroom townhouses on Packers Way created from one of the three original factory buildings that are being retained as part of the scheme. Steeped in history with high ceilings and large statement windows the townhouses stand out from the rest, thanks to their unique features.

Interest in these properties in particular has come from areas outside of Bristol including Bath and Portishead, with people keen to move back into the city centre, realising east Bristol has a lot to offer.

This summer will see the launch of the eagerly anticipated apartments and demand is already high due to the lack of one and two bedroom homes available in the area. Indeed, people keen to get a foot on the property ladder snapped up the shared-ownership apartments in a matter of days.

There is a visitor centre on site that showcases the rich history of chocolate making in the area and the development, and anyone interested in moving to the area can make an appointment to view the show homes at The Chocolate Factory by calling 0117 374 6600.

For more information about The Chocolate Factory, visit: chocolatefactorybristol.com