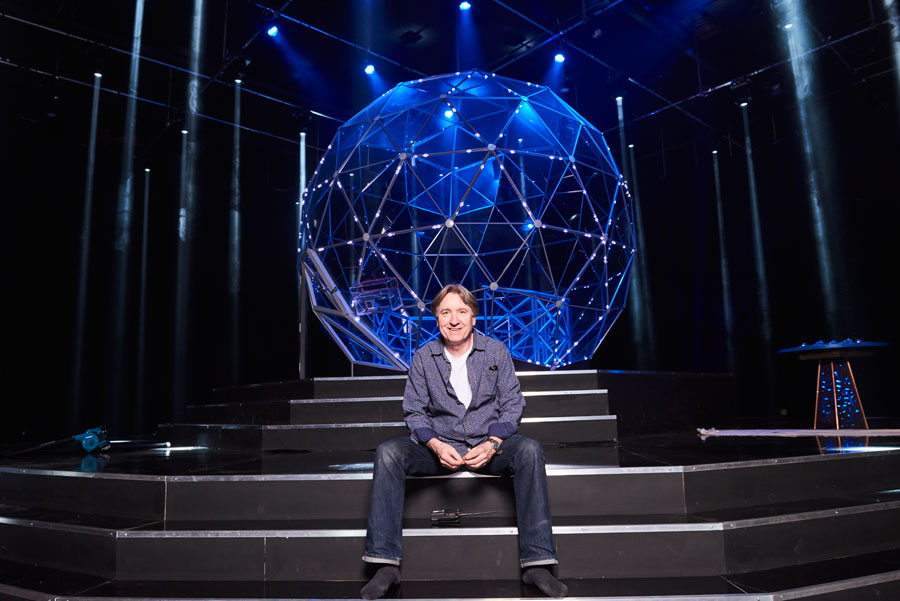 The Crystal Maze:
To The Dome!

Nineties cult game show The Crystal Maze has just returned to our screens – but did you know it was filmed in Bristol? We caught up with original Maze designer James Dillon to find out more about the 21st-century reincarnation

From traversing the murky bog of the Medieval Zone, and tunnelling through the Industrial, to materialising in Futuristic and scaling the walls of the Aztec, the contestants on the eagerly awaited, all-new series of game show The Crystal Maze certainly have their work cut out for them.

If you tuned into the first episode, you’re likely to have seen some mysterious, riddle-posing new characters – played by actress Jessica Hynes and comedian Adam Buxton – and new Maze Master Richard Ayoade and his special (by special we mean somewhat creepy) wooden hand, guiding intrepid adventurers through fantastical zones both familiar and entirely updated, packed with quirks, games and features to test, torment and trap contestants as they tackle the physical, skill, mystery and mental games to obtain the time crystals they need to ensure as much time as possible in the famed (and improved) Crystal Dome, and make sure nobody gets left behind and locked in the Maze… In the often risk-averse televisual landscape of today, where much money is thrown behind big drama, innovation can be thin on the ground, and that’s part of the reason this remake is so exciting. The Crystal Maze has moved forward, fulfilling the ambitions of the team – largely fanatical Maze fans – while retaining the spirit of the show, and giving it entertainment value proportionate to the demands of the modern day and its tech.

The other reason, of course, is the huge part in many childhoods that the cult programme played during the Nineties. Oh, and the incredible new set having been built in Bristol, in the city’s excellent Bottle Yard Studios – home in the past to the likes of Sherlock, Broadchurch, Poldark, Wolf Hall and many more. The latter meant we were lucky enough to take a tour of the 21st-century Maze, and meet the creative and technical wizards behind it, including exuberant executive producer Neale Simpson and original Maze creator, James Dylan – a giant in the world of production design, who designed the map 26 years ago and just had to return for the new season.

TBM: What is your favourite part of the set and why?

James: I’m always happy in the Aztec set. It’s like being on an exotic holiday. Sand, water, palm trees – and it’s always (artificially) sunny. The 4,000 gallon water tank now has a swimming pool filter and heater in it so it’s great for taking a quick swim in before starting filming in the mornings. The Aztec Zone – James’ favourite and possibly ours too!

Is there anything you miss from the original set?

The Aztec river that contestants paddled down when they entered the zone. It was fun to see contestants struggle with the unwieldy mock log canoes and occasionally get a soaking.

Twenty-seven years after the original, was there scope for a more adventurous set this time in terms of technology and special effects?

Yes, especially in the new Futuristic zone. We have incorporated LED screens and hi-tech lighting as well as a computer-controlled revolve that makes part of the set turn. Some of the games also used complex laser effects. Plus we have installed a Star Trek-style matter transporter which enables contestants to beam down to any other zone instantaneously. It’s a real time saver for transitions. The Future Zone has had a facelift using 21st century tech

How has the concept been adapted for a modern audience?

There is a much more elaborate camera and lighting rig than in the original shows. This should allow the viewer to feel more immersed in the environment and games. All the sets have been given a makeover with the latest scenic techniques and we have also structured the Maze so that it’s possible to travel from any zone to any other zone now (last time round, technical considerations meant contestants were restricted to a limited number of set routes). We can’t help but notice you also designed sets for The Mighty Boosh… Was that a set designer’s dream in terms of creative thinking and off-the-wall ideas?

Indeed, it was. Noel and Julian were fantastic to work with because they have brilliant, visual ideas that are much more theatrical than most traditional TV comedy. I trained originally as a theatre designer so loved the chance to be able to create surreal worlds that fitted in with the insanity. Richard Ayoade appears in several episodes of the Boosh and I know that Noel is a big Crystal Maze fan as well so there are some nice connections. In fact, the opening line of The Mighty Boosh’s title voiceover; “Come with us now on a journey through time and space…” would be an equally fitting intro for the Maze.

When designing the original Crystal Maze, how did you come up with the format? Were you inspired by any other game shows?

The original concept for Crystal Maze was to produce a studio-based version of The Keys to Fort Boyard. But the look of Fort Boyard is somewhat grey and claustrophobic and it soon became clear as I worked on the format with the original producers that we needed to create a more engaging world. Keeping what was good about the format but altering the journey by travelling into different worlds and times was what made The Crystal Maze special. The zones were inspired more by films than anything else. I wanted the viewer to feel we were in places that felt epic and exciting and that they and the contestants were on an adventure together, leading to the iconic Crystal Dome.

The Crystal Maze is a world of its own – how do you go about fitting so many unique areas into one, navigable space suitable for filming?

In the original series, we made one show every two days. This series we were sometimes shooting two shows in a single day and up to seven shows in a week. Making the space work for the sets, games and filming is crucial to the success of the show and everything starts with finding the right space. In this instance we were fortunate to be able to come to the Bottle Yard. They had the floor space we needed (some 32,500 sq ft) and the management team there were fantastically helpful in accommodating all the needs and demands of the Maze. Very few places would be happy to see 12,000 gallons of water, 18 tonnes of sand and a tropical forest arrive at their front door. Making the production work logistically was like the ultimate Crystal Maze challenge. It all starts with CAD plans of the studio and then fitting in the sets and allowing enough space for the cameras and lighting to access all the areas they need to get to in order to film. Fortunately I had more than two minutes to complete the task although I’d probably have been locked in a cell by the producers if I’d failed. The magical Medieval Zone is faithful to the original ’90s show

Any whacky ideas that didn’t quite make it off the drawing board?

I wanted to try and do something involving gravity in the Futuristic Zone. I looked at those experiences where you are kept afloat by fans that blow air up and give a skydiving feel. We also looked at a game involving suspending contestants on wires and floating them in a challenge as if in space. Hopefully, if there’s a series two, we can invent an anti-gravity device of some kind.

If you had to live in one of the zones, which would it be?

They’d all have advantages and disadvantages as living spaces. The Crystal Dome might work best. It’s fan-cooled for hot days and has lots of glass for views of the surroundings as well as a constant supply of gold and silver tokens that can be exchanged for mediocre prizes that are hard to resist!

Do you think there is scope for more entertainment shows like this on our screens? There’s a lot of big-budget drama around at the moment…

I’m sure there is scope. A lot of big-budget dramas are being made in the UK because of tax breaks and they are creating lots of jobs and spend in the local economy. A show such as Crystal Maze could be very appealing as an international production and hopefully overseas producers will want to come and bring their own contestants to try and ‘crack’ the Maze. It’s obviously very expensive to make the initial commitment to building sets on this scale so tax breaks for this kind of show would help enormously.

What happens to the set after the series has finished? We’re assuming you’ll have the rotating futuristic zone screens installed in your front room… (We would)

At present the set’s being stored at the Bottle Yard. I think that everyone will want rotating screens in their front rooms from now on. I’m ramping up to manufacture…

Have you got any other exciting work in the pipeline this year?

Yes. I am just starting work on a new series with Bristol legend Russell Howard for Sky TV. He is currently on his world tour and we will be shooting the new series this autumn on his return. ■

Tune in on Friday evenings to watch The Crystal Maze; or visit thebottleyard.com for more information on the show’s Bristol location

Next
Get The Look: Crane 29
Start typing to see results or hit ESC to close
bristol gender film history tv
See all results