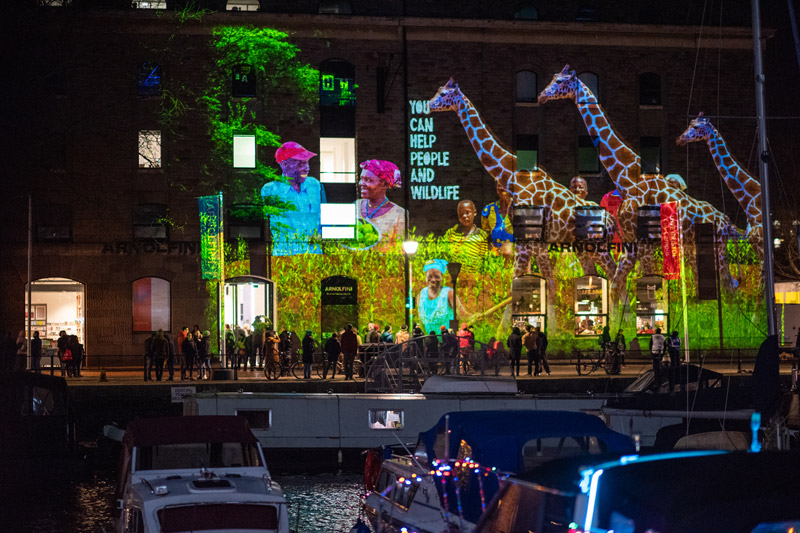 Internationally renowned artists and local talent lit up the city with a series of interactive light installations as part of the first ever Bristol Light Festival from 27 February – 1 March.

Set across the city, the installations interacted with different locations to create a blazing trail of light through the city centre. Visitors were able to see, experience and enjoy art installations that visited the South West for the first time as well as brand-new installations created exclusively for the festival.

It was the first of a three-year series by Bristol City Centre Business Improvement District (BID), in partnership with Bristol City Council and the University of the West of England.

The interactive light installation immersed those walking across it in an ethereal pink light as they cross the water. Activated by people walking across the bridge, bursts of pink fog were omitted, and lights brightened the way, creating an immersive experience which inspired and intrigued audiences both on the bridge and from afar.

Neighbours was specially commissioned for the festival to pay homage to the city’s graffiti culture. Working with four Bristol-based graffiti artists and illustrators the piece responded to, and was set around, Banksy’s Well Hung Lover on Park Street to reveal what else is going on in the neighbouring properties next to the two-timing wife, angry husband and her dangling lover. The piece was a collaboration between Bristol artists Inkie, Jasmine Thompson, Parys Gardener, Zoe Power and Limbic Cinema.

Wave-Field Variation Q, created by Lateral Office and CS Design with soundscape by Mitchell Akiyama, featured in Queen Square, offering an opportunity for visitors to have fun with family and friends.

Originating in Canada, the collection of eight giant illuminated see-saws created a truly interactive and fun light installation. As the see-saws were played on, lights and music were activated – visitors were invited to partner up and be a co-creator of their own piece of art.

French visual artist, Olivier Ratsi, transformed a central Bristol square with his large-scale work Frame Perspective. The huge sound and light piece consisted of a 30-metre-long luminous installation of repeating frames and LEDs, creating an impressive scale piece that disrupts the space in which it is set. The lights and sounds altered the surrounding environment, creating an intense experience for visitors.

Jack Wimperis brought two installations to the festival. His light project MilkBottle was a specially commissioned series of light sculptures, made from thousands of recycled milk bottles. The sculptures were created to raise awareness about single-use plastics.

Hosted by Cabot Circus, MilkBottle Cages comprised a sculpture of thousands of recycled milk bottles located in Cabot Circus, with each bottle embedded with LEDs.

MilkBottle Screen saw a 4 x 2.5m screen of 600 one-pint milk bottles hanging up and lit to create a route for visitors to follow along the Light Festival trail.

Main Image: Wildlife by the Waterfront by Send a Cow Charity

Presented as part of Bristol Light Festival, Wildlife on the Waterfront told the tale of the people and wildlife of Uganda’s oldest national park. Created by local charity, Send a Cow, in partnership with African conservation charity Tusk and Bristol’s award-winning Limbic Cinema, this bespoke projection was projected onto the Arnolfini.

The Living with Wildlife Appeal is a partnership between Bath-based Send a Cow, which supports families in rural Africa grow their own futures, and the African conservation charity, Tusk, based in Dorset.

Working together, the two organisations hope to raise £760,000 for a new project to support over 7,000 vulnerable families living on the outskirts of the national park and protect the animals that live within it. The appeal has the backing of the UK government who will double all donations to the Living with Wildlife Appeal before 14 April.