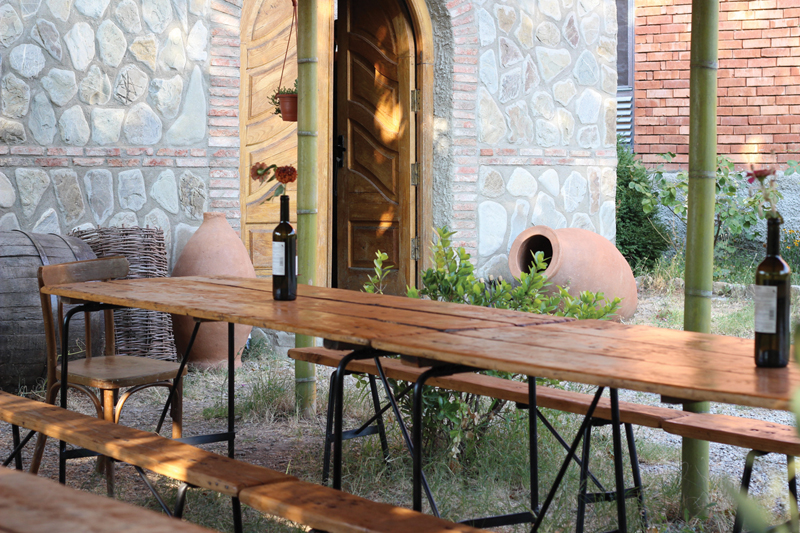 Viticulture vulture Jess Connett takes a road trip across Georgia, the birthplace of wine, to discover how this ancient drink is helping its motherland forge a national identity

My first taste of Georgian amber wine came, somewhat unexpectedly, with breakfast. In the lofty sixth-floor restaurant of Hotel Old Town in Batumi, where a marble staircase spiralled up to a roof terrace, the waiter beckoned me to a heaving buffet table. “Coffee, tea, wine,” he grinned. Beside a deep red and a cold white was a third that definitely wasn’t rosé. It was a rich orange colour and tasted wild like wine dialled up to 10. After half a glass, clambering upstairs to see the rooftops became an adventure.

To say that Georgians like their wine would be the understatement of many millennia. This little country on the fringes of Europe has 524 endemic grape varieties, and a traditional winemaking method protected by UNESCO. Viticulture has an 8,000-year history in Georgia, and the land’s unique wines are fast gaining British fans.

Leaving behind Batumi’s palm-fringed boulevard (and wine vending machine on the beach), I began to spot brown road signs for the Wine Route. This is an ongoing project from the Georgian National Tourism Administration, signposting the best vineyards and cellars nationwide. The road climbed into green hills shrouded by cloud, and vines spilt over every fence. Near the city of Gori, massive tapered clay vessels (qvevri) – essential for Georgian winemaking – were being sold by the roadside. “We have two places in Georgia where we can get good clay for qvevri,” says vintner Beka Jimsheladze. The clays have antiseptic properties and come from the eastern region of Kakheti — where Beka makes wine — and here, west of the capital Tbilisi. “We cannot get good qvevri only with good clay,” continues Beka. “The most important person is the maker, who gives shape and soul to the qvevri.” These vessels, the biggest of which can hold thousands of litres, are sculpted entirely by hand.

…Twenty miles south of Tbilisi, Georgia’s oldest qvevri have been found – and with them the oldest evidence of viticulture in the world…

The news verified what Georgians already knew about their special drink. On a hilltop overlooking Tbilisi stands the 20-metre high statue of Kartlis Deda, ‘mother of Georgia’, holding a sword for her enemies and a bowl of wine for her friends. Below her, the city is sliced by the river Kura and delicately cut by cable car. The streets are threaded with grapevines, stretching between rusty balconies. In the warm evening a jazz band strikes up at Cafe Kala and I happily sample a semi-dry white.

Tbilisi has been twinned with Bristol since 1988, through the country’s tricky transition from part of the Soviet Union to independence in 1991. Some 20% of Georgian territory is currently occupied by Russia. But with independence, tourism and wine production have both grown: “Because of the Soviet Union’s closed borders and restricted access to information, we were living in a shell,” Beka says. Wine is now helping Georgia to forge its national identity.

An hour’s drive from Tbilisi is the region of Kakheti, which produces almost 70% of Georgian wine. The Wine Route signs become more frequent, and the sides of the road are peppered with stalls selling homebrew. Vineyards grow in neat green rows in the gentle valley.

Beka’s cellar, Marani Vellino, is up a steep path, dappled by shade from fig trees. “Every autumn I would help to make wine for our family,” he says, showing me into the cellar he and his father, Besarion, built-in 2015. Eight qvevri are buried in the flagstone floor. Crushed grapes go in skin, seeds and all, and are left in there for six months. The egg-shaped vessels naturally filter out all the impurities.

“When I was a child and I was tired of working during harvest time, my father would tell me that he used to do the same work when he was my age,” Beka says. We take a seat in the shade of a walnut tree and open a bottle of his amber-coloured wine. It pours like molten gold in the afternoon sun. Despite the colour, it is made from white grapes: keeping the skins on during the maturation process creates deep flavours, body, tannins and colour. Each mouthful tastes rich and full; almost spicy.

“When I make wine, I know that, 8,000 years ago, Georgians were making wine with the same methods. I feel they are still alive,” Beka says. “Georgia is the first country in the world – in the universe – to make wine. It’s an honour for us.”

• Check out Bristol’s Georgian-inspired supper club Sunday Supra Club to get a taste – details at instagram.com/sundaysupra

Previous
Communication is key in the prevention of foster placement breakdown