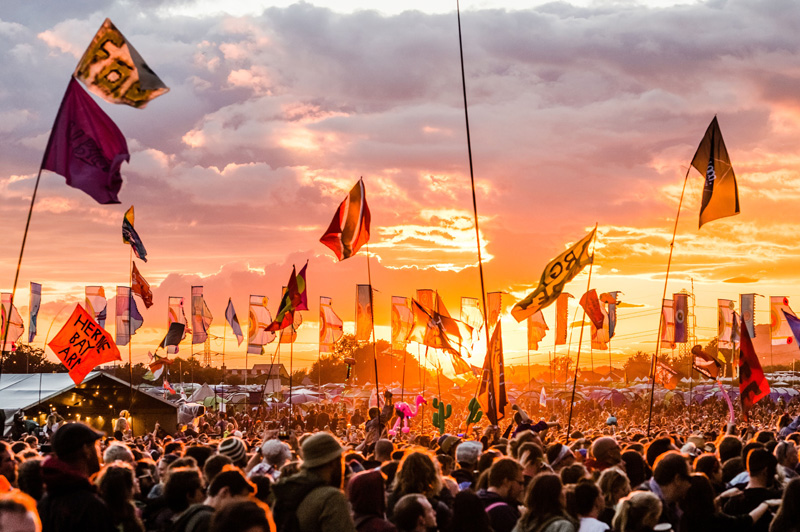 When you pack away the flip-flops at the height of summer and prepare to don the wellies, it can mean only one thing: Glastonbury is back. And this year the iconic festival is bigger and better than ever before. Malcolm Croft celebrates Worthy Farm’s special connection with its nearest major transport and traveller hub – Bristol

For millennia, British summertime has begun with the arrival of the Summer Solstice; the day – or the precise second in the day, to be exact – when the nation experiences peak daylight hours before turning back towards winter. For the last 49 years, however, the sun has come second to another bright star for many – Glastonbury Festival, now considered the definitive starting gun for the silly season.

The flame for Glastonbury first sparked when Pilton dairy farm owners Michael and Jean Eavis snuck through a hole in a fence at 1969’s Bath Blues Festival in order to watch their favourite rock group, Led Zeppelin, perform. Today, Glastonbury Festival is the largest greenfield music and contemporary arts festival in the world. But, to its most ardent attendees, it is so much more than just another of the UK’s 280 summer festivals. As Vice magazine once nailed it: “Glastonbury’s more than just a five-day farmyard bender. It is the greatest show on Earth.”

Indeed. And it’s a show that caters for every soul, style and sound imaginable. The numbers speak for themselves: 1,500 acres, over 750 food stalls (almost 20 per cent of which are traders from Bristol/Bath), 900 shops, one million square metres of camping space and more than 100,000 members of staff keeping it all safe and tidy. Thankfully, there are also more than 5,500 toilets (more of which later) to keep up with the supply and demand. Oh, and how could we forget, the most thrilling line-up of internationally acclaimed headliners (this year: The Killers, The Cure, and Stormzy reign supreme on the Pyramid Stage), emerging talent, performers and peacemakers across scores of stages, areas and fields – numbering into the thousands.

Yes, you’ve guessed it. These days, going to Glasto – as well as simply watching it on the BBC’s now-beloved broadcasts – is perceived as a cultural badge of honour, as British as fish and chips, or Brexit. But what is the impact on Bristol, its nearest (and nicest) neighbour?

As the festival kicks off Somerset’s summer in style, from 26 – 30 June, more than 210,000 people are expected to descend upon the county, a quarter of whom are residents of the South West. Approximately seven per cent of Glasto-goers originate from Bristol and Bath, according to the one-and-only definitive survey (2007) of the festival to date.

For decades, Glastonbury’s connection to Bristol has run much deeper than waiting for Idles’ hotly anticipated headline performance this year and being a stone’s throw (40km) from the festival entrance. There are, and have always been, many vital non-traffic links that have bound Glastonbury and Bristol together. Arcadia, Glastonbury’s large flaming spider area (and the definitive after-hours image of the event) was conceived and built in Bristol (remember its Queen Square takeover in 2015?); and the ‘Pee Power’ toilets, which hit the headlines in 2016 for their revolutionary ability to turn urine to electricity, are now one of Glastonbury’s most prominent partners: they were invented in Bristol. Michael Eavis was even made a Master of Arts by the University of Bristol in 2006; in his acceptance speech he thanked the city for all its support of his “wild idea”. But the connections don’t fizzle out there.

It’s estimated that one-third of all festival-goers travelling by train pass through Temple Meads en route to Castle Cary, the nearest station to the site, including Bristol’s city centre bus station (FYI, the local bus service is the 376). The remaining 64 per cent of festival attendees who travel to the festival by car (more than 50,000 vehicles), encounter severe congestion on the country roads that connect the two destinations, a journey made even more torturous by the fact that the nearest motorway is 25km away. It’s understandable that Bristolians who commute by car and public transport find the two days either side of the festival unbearable.

“I love Glastonbury,” said James, a local commuter, “but I try not to drive or use public transport when the festival is on. “Too many people,” agreed Emily, another train user who has seen Bristol Temple Meads “in meltdown” before and after the festival’s run. But, ask anyone in Bristol, the consensus is the same. “The whole of Somerset feels alive when the festival is on,” said Carol, a resident of Stokes Croft, “and Bristol has extra buzz about it too.”

Of course, Bristol doesn’t need Glastonbury to make money from live music. Annually, the city generates £123million in revenue for live performances all by itself. Yet, with its proximity to Worthy Farm, it’s inevitable that Bristol benefits from the festival. But by how much?

In 2007, Bristol-based company, Baker Associates, undertook a local economic impact survey to understand just how much Glastonbury swings the dial money-wise. The report’s aim was to not only fully understand the local economic effect of Glastonbury – for the first time, and no further reports have been done since – but to also help plan future festivals. The report continues to prove invaluable.

“We’ve always said that the festival had a big economic impact but we’ve never been able to prove it,” said Dick Vernon, trading manager for Glastonbury Festival, after the publication of the report. “Now we have an independent group who have come up with some staggering figures.” John Baker, from Baker Associates, asserted that the “study clearly shows that the Glastonbury Festival has a significant economic impact, both locally and across a wider geographical area, with figures greater than for comparable festivals or events elsewhere in the UK.”

More than a decade on, Bakers’ data is as revealing as ever. Bristol, and Bath, remain at the heart of the conversation, and since the report – the only de-facto statistical analysis of Glastonbury’s local impact – it’s fair to assume that as the volume of ticket-holders has increased to 210,000 (an increase of 40,000 more merrymakers, since 2007), so too will the favourable figures.

As the largest major city, Bristol, naturally, has earned more than its share of the pie. It is estimated that Bristol’s net earnings over the festival weekend equates to more than £2.4million, with an additional £3million invested in Bristol and Bath companies – in particular for staff and stewarding to keeping the site safe and clean (toilets, waste disposal, cleaning), signage, traffic and parking, and “non-permanent structures like screens and tents”. Expenditure for electric and power hire went predominantly to providers in Bristol and Bath, and with more than 120 generators required to keep the festival running hot, the energy bills, you would imagine, must also be quite substantial.

Every year the festival takes place more than £100million is injected into the local economy and, according to Mr Eavis himself, “a substantial proportion of that, £52 million, is spent in Somerset.”

An additional £1million is donated to local charities and causes and, today, more than £10million worth of business is supplied to local companies based within 25 miles of Worthy Farm. Across a handful of industries, naturally, local businesses see a decent bump in trade. As one shop owner near Temple Meads claimed: “It’s common to see a tripling of normal sales for everyday items such as water and takeaway food. The nearest ATMs get hammered too.”

With news breaking last year that Michael and daughter Emily (effectively in charge of the festival’s music organisation and logistics since 2008) are looking to set up another Glastonbury Festival away from the Worthy Farm site from 2021, there has been much speculation as to where that secret site will be unveiled. Though the name of the new festival will change to the Variety Bazaar, the DNA of Glastonbury will run through its veins and has been described by Michael as “the last big gamble of my life”.

While the site, no doubt, won’t be announced until after the 50th birthday bash in 2020, several sites have been mooted with Michael letting slip that one proposed site is “about halfway” between Worthy Farm and the Midlands “as the crow flies”. Bristol, the happiest city in Britain (according to a national poll in January 2019) – and with more than enough green fields to spare – is, coincidentally, just about halfway between Glastonbury and the Midlands, meaning that the bond between Bristol and Glastonbury could become even stronger.

This is Glastonbury, after all, anything could happen…

Previous
Adding another dimension to your garden with alfresco art