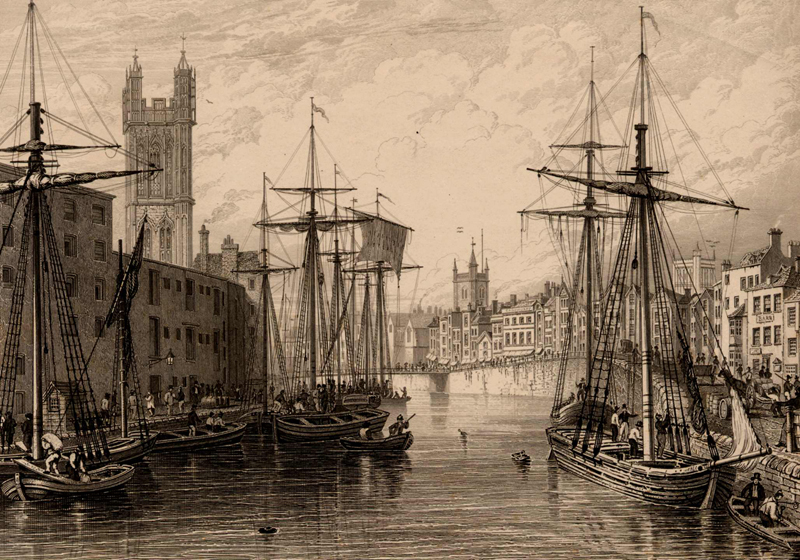 Shiver me timbers: 300 years since Blackbeard

As we approach the 300th anniversary of Bristolian buccaneer Blackbeard’s death, Stephen Roberts looks at the city’s seafaring history and its other notable characters

‘Shiver me timbers.’ ‘Pieces-of-eight.’ ‘Ahoy there me hearties!’ ‘Yo, ho, ho and a bottle of rum!’ Did anyone ever really speak like this, or are these exclamations only found in the pages of piratical novels, or at fancy dress parties? I rocked up in Bristol, intent on finding out more about pirates and privateers.

Piracy on the high seas was illegal. There’s no two ways about it. Privateering, on the other hand, had a veneer of legitimacy. This was perfectly legal, provided the ship’s captain had a ‘letter of marque’ from his government, permitting him to attack and steal from merchant ships belonging to specified countries (most likely those their country was warring with). A percentage of the ship’s bounty was handed over and everyone was happy (except for the ship that had been violated).

I had come in search of Blackbeard, the city’s most notorious pirate, who perished 300 years ago, on 22 November 1718. Edward Teach (or Thatch, as he was also known) was presumed to have been born to a well-to-do family in the Redcliffe area of Bristol – England’s then second-city – in c1680. By 1706, he was a bog-standard sailor based in Jamaica, but come 1717, when he captured the slave ship Queen Anne’s Revenge, off Martinique, he was a full-blown pirate, who would number four ships and 400 crew in his entourage. The Royal Navy had just 10 ships patrolling the American coast, so could do little to apprehend Blackbeard, who captured 23 other ships. 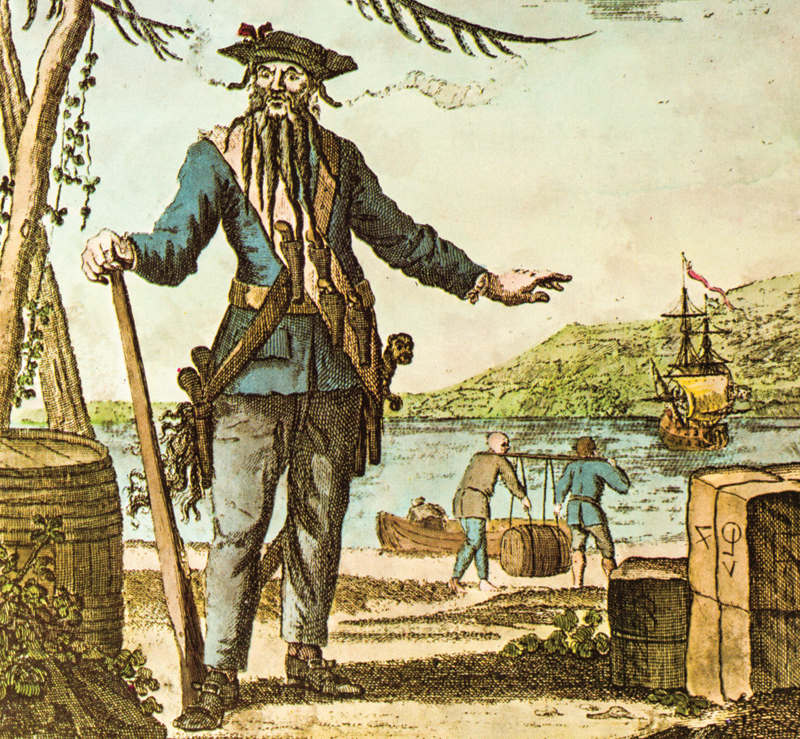 Blackbeard, believed to have been born in Redcliffe. Image from The Pirates by Douglas Botting – Time-Life Books 1978; Wikicommons

The nickname is self-explanatory. To add to his persona, Blackbeard took to stuffing smoking fuses in his hair (endangering his ‘thatch’ in the process one presumes). He must have cut a frightening figure, which, of course, was the intention. Adversaries cowered, as did his own crew, as Blackbeard dispatched the odd one with a firearm, just to maintain discipline. All good things come to an end, though, and Blackbeard was finally cornered off the North Carolina coast, allegedly falling victim to an assortment of guns and swords. Few mariners would have shed a tear, but the ladies did apparently, for he’d been married 14 times and sired 40 children. One does wonder how he had the time.

One of Blackbeard’s gang was pirate Israel Hands, also quite possibly from Bristol. Now, this is interesting, for he provides a link to the most famous of all swashbuckling novels, Treasure Island (1883), written by Robert Louis Stevenson. There is an Israel Hands in the novel, the coxswain of the Hispaniola, who is shot dead by cabin-boy Jim Hawkins, in self-defence. We know Stevenson visited Bristol – he’s said to have frequented The Hole in the Wall inn, off Queen Square, which has a spy-hole for spotting the dreaded press-gangs. Did this inspire the Spy-glass, the Bristol inn where Long John Silver was to be found?

Blackbeard wasn’t the only famous pirate with links to Bristol. Welshman Bartholomew Roberts (1682-1722) was originally in the Merchant Navy and sailed from Bristol on slave ships before he became the most successful pirate in history, capturing well over 400 ships, and made Blackbeard look like a part-timer. Piracy didn’t pay in the end, however, as Roberts fell to a broadside from Royal Navy ship HMS Swallow off the coast of West-Central Africa.

Bristol’s vital role in this story is easily explained. During the reign of Charles II, Bristol was England’s second-city, after London, with a population of some 20,000. The rise of Britain’s American colonies (with a profitable tobacco trade) in the 17th century, then the expansion of the slave trade in the 18th century, made Bristol a flourishing harbour and, for a while, this country’s leading slave port. For more than a century, around 20 slave ships a year departed Bristol, accounting for one-fifth of the trade in Britain.

Walking around modern Bristol, one is never far from its seafaring past. In the church of St Mary Redcliffe is a memorial to William Penn (1621-70), a Royal Navy officer, who was born in the city. His son, another William Penn, became the founder of Pennsylvania. Bristol’s first bank meanwhile, the Old Bank in Broad Street, opened in 1750. Two of its founding partners, Isaac Elton, and the flamboyantly named Onecipherous Tyndall, had interests in the African and Caribbean trades (in Bristol, many early bank founders and directors had links to the slave trade).

It wasn’t all slavery though. Bristol was a vibrant port trading with Ireland, France, Spain, Portugal and the Barbary Coast (North Africa), while trade with North America and the Caribbean thrived during the Commonwealth (1649-60). If you could travel back and observe, you’d see plenty of woollen cloth being exported, plus coal, lead and animal hides, with some of the fine things in life (wine and olive oil), plus grain, slate and timber coming in. 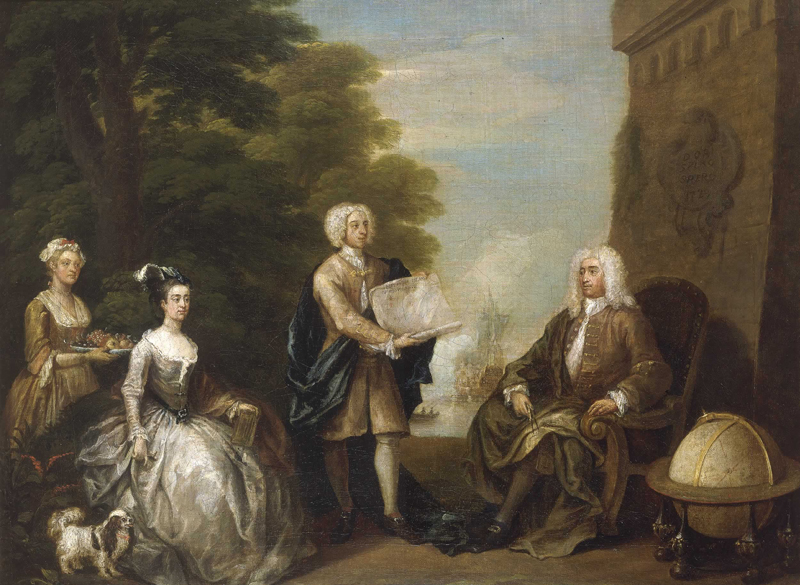 Another thing you might notice was the war on piracy. While Blackbeard was a Bristolian, so was his nemesis, Governor Woodes Rogers – a navigator and privateer, born in the city in 1679, who later lived in Queen Square (today there’s a blue plaque on his house). Having circumnavigated the globe (1708-11) on a privateering expedition against the Spanish, he became General and Governor of the Bahamas, which he undertook to suppress piracy. Blackbeard rejected Woodes Rogers’ offer of a king’s pardon and ultimately paid with his life. Also, in Queen Square is the Custom House, where taxes and duties were collected on ships entering the harbour. Pirates would have had no truck with that.

It was during his circumnavigation that Woodes Rogers rescued Alexander Selkirk (1676-1721) from Juan Fernandez Island (off the Chilean coast), where he’d been a castaway for five years, and conveyed him back to Bristol. A Scottish sailor, Selkirk had apparently quarrelled with his captain, and been marooned, at his own request. When he pitched up in Bristol he had tales to tell and a ready audience. One listener was Daniel Defoe, who later wrote Robinson Crusoe, based on Selkirk’s story. The two men met in Bristol’s oldest pub, The Llandoger Trow – one of the city’s last timber-built structures, supposedly replete with secret smuggling tunnels and the odd ghost.

Robert Louis Stevenson also knew a good yarn when he saw it. His character Ben Gunn is another castaway, and again, based on Selkirk. The first landlord of the Llandoger was called Hawkins and perhaps that was why R.L. named his cabin-boy Jim Hawkins. It is also suggested the pub was the inspiration for the Admiral Benbow inn, Jim’s home in Treasure Island. It’s even said that Blackbeard himself quenched his thirst in The Llandoger Trow. As for the name Admiral Benbow, look no further than Admiral John Benbow, a 17th-century naval officer and privateer, who sailed from Bristol. It seems Stevenson picked up much material here. Blackbeard, meanwhile, is also alleged to have frequented the Hatchet Inn in Frogmore Street, which dates to 1606 and was reputedly the go-to boozer for self-respecting pirates. There’s a story, perhaps apocryphal, that Blackbeard himself supplied the ale, while claims the door is covered in human skin – albeit covered in black paint today – are enough to put you off your pint.

Now, where did I leave my cutlass?

What to see and where

• Queen Square – plaque for Woodes Rogers on Georgian House. Custom House where taxes and duties were collected from ships
• The Grove, Queen Square – The Hole in the Wall pub
• King Street – The Llandoger Trow where Selkirk and
Defoe met
• Millennium Promenade – reputedly Blackbeard’s house is here
• Bristol Cathedral – silver candlesticks seized by Woodes Rogers from the Spanish in 1717
• St Mary Redcliffe – memorial to Sir William Penn
• Harbourside – where there were departures (slave traders with Bristol-made rum) and arrivals (pirates with booty)
• Frogmore Street – Hatchet Inn, the alleged go-to for drinking establishment for pirates.