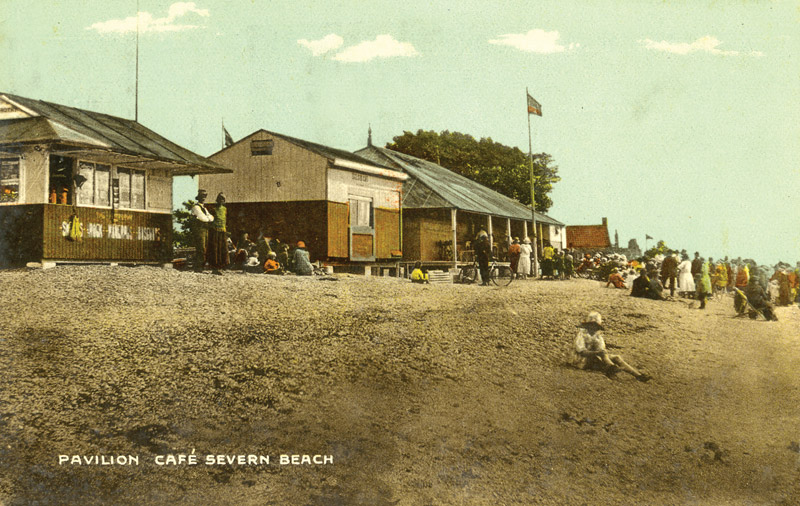 To be beside the sea: The life and times of Severn Beach

While it never quite became the Blackpool of the West, this shingly spot sure had its heyday, and the views across the estuary are spectacular still, says Andrew Swift

Amid all the anniversaries to be celebrated this year, one centenary is in danger of being overlooked. On 3 August 1920, a classified ad appeared in the Western Daily Press: FOR SALE, BUNGALOW. 10 feet by 16, two rooms, standing in freehold garden adjoining Severn Beach. Ableton Lane crossing, Pilning. Vacant possession – apply 3, Imperial Road, Clifton.

The most striking thing about the advertisement may appear to be the bungalow’s size – or lack of it. More noteworthy, though, is that this seems to be the first time the name of Severn Beach appeared in print. For centuries, the Severn shoreline here had been grazing land, with a few scattered farmsteads. In 1900, though, the Great Western Railway (GWR) built a single-track goods line across it. By the time that advertisement appeared 20 years later, a local entrepreneur called Robert Stride had twigged that this windswept spot had potential, and, with the right marketing strategy – and its own railway station – could be a nice little earner.

The GWR needed little persuading, and on Whit Monday 1922 the first trains ran from Bristol to an excursion platform at ‘the newly discovered Severn Beach’. As a result of mass publicity, 11,000 people made the trip, but, while the weather was fine, there was nothing to do except go on the shingly beach, and virtually no facilities or refreshments. Then, as the crowds headed home, the crush on the platform was so great that one man fell under a moving train and had to have his arm amputated.

As opening days go, it was an unmitigated disaster, but the turnout had certainly lived up to expectations and, with six trains a day running to the new station, traders were soon scrambling to set up makeshift refreshment stalls. That first summer, over 70,000 people took the train to Severn Beach. Many more came by road.

As the season ended, Robert Stride established a development association to draw up plans for the future. According to the Western Daily Press, these included ‘a handsome pier’ along with ‘hotels and bungalows and terraces of handsome houses overlooking the arm of the estuary’. A Mr Blackwell built pleasure gardens and a beachside pavilion, a free guide to the fledgling resort was published, and ‘an enterprising Bristolian ordered 20 fine donkeys from Ireland’.

The 1923 season got off to a flying start with 9,000 visitors turning up on Easter Monday. The Great D’Orleans Circus appeared at Blackwell’s Pleasure Gardens, while a week-long carnival included egg-and-spoon races, tug-of-war, boxing competitions and a ‘bladder fight on donkeys’. In July, a new attraction – Westlake’s Café Pavilion, ‘equipped for refreshments and dancing’ – opened. Everything augured well for an even better season the following year.

On 11 October, however, disaster struck. The highest tide for 15 years swamped what was in effect little more than a shanty town. Huts were tipped over, tables, chairs and other furnishings were swept away. Many bungalows were transformed into houseboats, floating on newly created lakes far inland. The only building to escape unscathed was Westlake’s Pavilion, built on pillars of stone.

The ambitions of the developers may have been checked, but there was plenty of time to put things in order for the start of the next season, when even larger crowds turned up. The GWR was also convinced of Severn Beach’s potential, building a new island platform, 720 feet long and capable of handling two trains at once, with a commodious waiting area.

The inundation seemed to have dented many people’s confidence, however, and it took some time to recover the initial momentum. Two things essential for sustained growth were a decent-sized swimming pool and a pub, but Severn Beach limped along without either for another decade. A small pool opened in 1927 but it was not until 1935 that one worthy of a popular resort was finally built. Known as the Blue Lagoon, it was over 90 metres long and equipped with diving boards, a water slide, children’s see-saws and a fountain. Two years later, George’s Brewery finally opened a pub – the Severn Beach Hotel – on a lavish scale, with a bar capable of accommodating 300 people, a lounge, a dining room and a ballroom for Saturday evening dances.

By now, the resort was not just attracting daytrippers. Many people rented chalets for a week’s holiday, while others braved the elements under canvas at the Rustic Camping Grounds. The opening of a ‘gigantic new inland lake’ also came in 1937, encircled by a miniature railway. Amusements included a helter-skelter, roundabouts, dodgems, a ghost ride and ‘the Toboggan Glide Rollercoaster’. There were water carnivals with swimming and boat races, bathing belle competitions, beach pyjama parades, seaside revues, and – in the evening – dancing to the strains of Dump Harris’s Glendale Melody Makers.

It must have seemed like Severn Beach was finally set to become the Blackpool of the West, and in 1939 Robert Stride got the go-ahead to build the Sun Ray Holiday Camp. But then the war came, and, although Severn Beach’s popularity remained undimmed throughout the 1940s and 1950s, it was even less well prepared than other resorts for the changes the 1960s would bring.

Even so, crowds still flocked to the Blue Lagoon, while Saturday night hops at the hotel – by now renamed the Severn Salmon – achieved legendary status. Performers included Adge Cutler, who recorded his own tribute to the resort – Aloha Severn Beach – in 1968. This ribald paean to its exotic delights, however, only underlined how far this ‘little corner of heaven down there by the River Severn’ had fallen since the advent of cheap package holidays.

Eventually, the Blue Lagoon was abandoned, taking a final bow in a 1980 episode of Shoestring, with the private detective facing a showdown with a couple of villains in its vandalised, graffiti-daubed ruins. Shortly after, it was demolished to improve the sea defences.

Today, there is little left to remind us of the dreams of Robert Stride and those early developers. The boating lake has been filled in, the amusements long departed, and in 2002 the hotel was demolished, leaving Severn Beach publess once again. Yet the trains still run, Shirley’s Café – a Severn Beach institution since 1945 – is still a popular meeting place, and, while the shingly beach may not be much to write home about, the views across the estuary are as spectacular as ever, and the walk northward along the sea wall – now dominated by the Second Severn Crossing – is, on a sunny day, unbeatable.

• Andrew Swift is the author of Walks from Bristol’s Severn Beach Line, available from bookshops or direct from akemanpress.com.
A heritage trail can be found on the A Forgotten Landscape website; bit.ly/36SEcO7