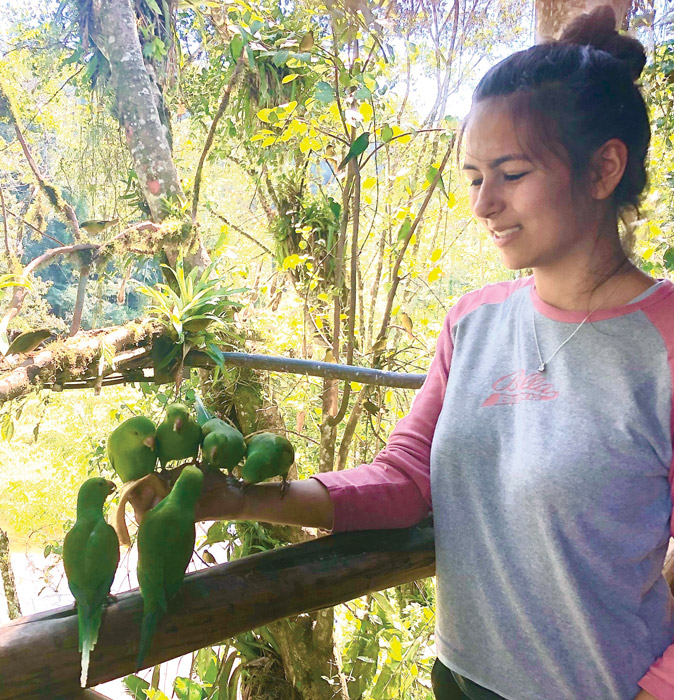 ­­­Far from smoking behind the bike sheds, many of our local young adult generation are making like Greta and seeking to repair that which has been damaged within our ecosystems and environment

Seventeen-year-old Bristol birder, blogger and conservationist Mya-Rose Craig – AKA Birdgirl – can now add honorary doctor of science to her bio should she wish, with the University of Bristol having recently seen fit to award her a very special degree. The sixth-former, yet to sit her A-levels, was recognised for her efforts to bring about positive change via Black2Nature, which she set up in 2016 to lead the fight for equal access to the natural environment for visible minority ethnic (VME) communities. Now, inspired by Forest of Avon Trust’s new initiative Replant Bristol, she’s getting involved with its ambition to double Bristol’s canopy cover. “It’s a really bold target and one that will require everyone to work together,” she said. “I want to do my bit to raise awareness of the value of trees, and the benefits they bring to our city, as well as let people know what they can do to help.” Here we learn more about what makes the young activist tick.

What got you interested and so actively involved in these issues?
Trees are a really important part of the solution in fighting climate change, and I’ve recently started planting them in my grandad’s village in Bangladesh. We’re very lucky in Bristol to have a large urban forest comprising some 600,000 trees. Not only do those trees absorb and store CO2 and combat air pollution, they also add colour and life to our urban spaces, which improves our health and wellbeing. And, of course, many species of birds live in the tree canopies. However, 75% of the city’s most common tree, the ash, is expected to be lost as a result of ash dieback. As well as protecting existing trees, we need to urgently expand the city’s canopy cover, and ensure new planting is suited to a changing climate.

Tell us about your birding achievements so far – was this a passion you discovered yourself or were you introduced to it by someone?
I have been birding all my life as my parents and older sister were really into birds. They took me on my first twitch to see a rare lesser kestrel from Europe when I was only nine days old. By the time I was a toddler, I was used to being outside looking at birds and when we went to see a rare black lark on Anglesey, the bird came quite close to me and I pointed and shouted ‘birdie’ – my fourth word – a little too loudly. I think it was important to me that my older sister Ayesha was mad about birds. When I was three years old, she was 15 and really cool. So if she loved birds, I was going to love birds too. When she finished her GCSEs, we went to South Africa to celebrate with our first family birding holiday outside Europe. It was brilliant to see so many animals and I spent the long drives looking at the mammal guide book and getting Ayesha to read the names to me. A few days into our visit to Kruger National Park, a troop of monkeys walked into the track and I immediately shouted “vervet monkeys!” My family assumed I had made up the name until they looked them up in the field guide and realised that I was right. That was the first and last time they doubted my identification skills.

What is your favourite species?
My favourite bird species is the southern cassowary from Queensland, Australia. It is six feet tall, looks like a dinosaur, has a blue face and red wattle on its head, cannot fly and can kill with one kick. The other interesting thing about this bird is that the male looks after the chicks for quite a long time. There is another bird that I have wanted to see more than anything else since I was young. On a flight to Ecuador, when I was eight years old, I picked out 10 amazing-looking birds from the field guide that I really wanted to see. I saw all of them except a harpy eagle, the largest eagle in the world. I had tried to see one all over South America but did not have any luck until visiting the Brazilian Amazon last summer. We tried an old nest site four times and, on the last visit, just before leaving for home, I saw one sitting in a tree. It was so exciting and probably the happiest I have been in my life, ever.

How does it feel to be being awarded an honorary degree at such a young age, following the likes of fellow young hero Malala?
Malala is so brave, which gave me a lot of courage especially when faced with racism and trolls. It feels absolutely incredible to be rewarded in this way and I hope that I can use my honorary degree to raise awareness of the work I’m doing with Black2Nature. It’s currently a not-for-profit organisation but we recently applied for charity status. We really need to attract corporate sponsors, grant funding and volunteers so we can offer more nature camps for ethnic minority children and teenagers from areas of deprivation, as well as campaigning for equal access to the natural environment. Our next conference will take place on 17 June in partnership with Wildscreen Festival and the University of Bristol.

Where are your favourite Bristol nature spots?
I live in the Chew Valley just south of Bristol and love visiting my local patch, Chew Valley Lake. I go there at the weekend to go bird ringing for scientific study. In Bristol, I love Brandon Hill, Leigh Woods and Ashton Court which are all fantastic for nature.

Which other young Bristolians should be recognised for their work?
Lara Lalemi is a STEM postgraduate student at the University of Bristol who organised the first ‘Being BME in STEM’ conference last year to tackle the under-representation of BME students in science, technology, engineering and maths and the racism they face, especially from lecturers and universities. Her work is inspirational.

What would you like to campaign to change next in Bristol?
I think my campaign to improve ethnic diversity in the nature, conservation and environmental sectors, including education and filmmaking, is far from finished. The sector is only 0.6% minority ethnic after five years of campaigning. Although some small changes are taking place, there needs to be a seismic shift. I hope my next conference will be supported by the wildlife filmmaking sector as there were very few representatives in attendance at my last conference in October 2019. We also need wildlife films to be relevant to minority ethnic communities – for example by filming in places like Jamaica, Somalia or Bangladesh.

What else is in the pipeline for you for 2020?
I am going to be concentrating on my A-levels over the summer, and I hope to do lots of talks after that. I would really like to go to the UN Biodiversity Conference in China in October. I’m hoping one of the UK’s conservation organisations will give me the opportunity to speak about biodiversity, which I’ve been campaigning on since I was 11 years old, and the terrible impact that western conservation policies are having on indigenous peoples around the world, which I have been learning a lot about in my role as an ambassador for Survival International.