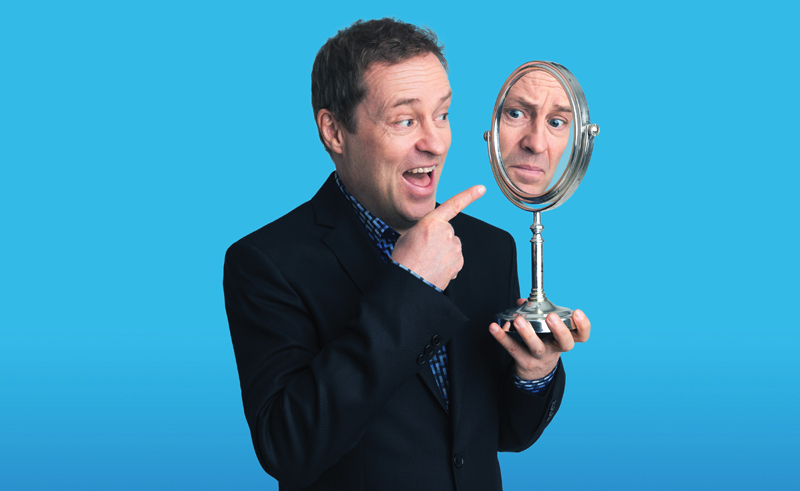 The Father Ted actor Ardal O’Hanlon managed to complete a UK tour of his latest stand-up show, The Showing Off Must Go On, just weeks before the nation went into Lockdown. We look back at the time when Brian Donaldson bagged a chat with Ardal, whose words about the ever-changing world seem more pertinent now than ever before.

Happily sliding into middle-age and fairly sure he knew all that he needed to know about the world, Ardal O’Hanlon was jolted out of complacency by the changing face of the global world in the era of Trump and Brexit. The good news was that it meant the Irish stand-up, writer, and star of such TV hits as Father Ted and Death In Paradise felt compelled to write a new stand-up set, which he toured across the UK.

“There’s an awful lot to talk about,” Ardal admits. “Especially in the last two or three years, the world has changed dramatically. There are lots of new things to deal with. I thought I’d cracked everything and then suddenly you have to completely re-engage with the world as it shifts. There are always things to say, but at the moment there’s a kind of urgency. I think as you get older you have to be true to yourself.

While Trump and Brexit feature large, in Ardal’s hands, the treatment of the work is typically off-kilter. “I think it’s incumbent upon a comedian to find clever and imaginative ways to come up with stuff. I personally prefer watching comedians who aren’t too blunt or too partisan, so while I have strong political views, I don’t want to hit an audience over the head with them. Comedians have to be cannier than that. I’m not going to mention Trump or Brexit by name, but I hope to be able to do stuff on them while trying to keep it a bit light and user-friendly.

“What seems clear about these events is that feelings will always trump facts in making decisions. All the decisions we make in life are irrational: our consumer choices are irrational, our choice of life partner might be irrational. You could end up marrying the craziest person in the world. ‘They might stab you.’ ‘Yes, but they have lovely hair!’”

As well as displaying his talent for a decent pun, the title of Ardal’s touring show reflects the part of his personality that he’s had to draw upon to get on in the entertainment world, despite his upbringing doing everything it could to dampen that spirit.

While I have strong political views, I don’t want to hit an audience over the head with them. Comedians have to be cannier than that…

“I’m a very reluctant show-off,” he says. “I come from a part of the world where showing off is anathema; it’s the worst thing you could possibly do. When you grow up in a border area of Ireland, people are very wary and cagey and keep their head down at all times. Don’t speak unless it’s absolutely essential, and don’t give anything away. So showing off was a really terrible thing to do; it’s up there with armed robbery.”

This left Ardal feeling somewhat conflicted. “I love stand-up comedy and I love performing, but I was always conscious that this is showing off and I’m slightly uncomfortable about that,” he continues. “I suppose the question I ask myself almost every day is ‘why do I do this?’ And as I get older, ‘why do I still do this?’ I suppose to some extent this is what I’m addressing in the show.”

As Father Dougal McGuire, Ardal charmed the socks off the nation when Father Ted reigned supreme on Channel 4 in the late ’90s. Although he’s not involved in any way with the proposed Father Ted musical (“I wish them well with it”), he still looks back with fondness on the Craggy Island-set sitcom which helped raise his profile in Ireland and far beyond – with the show proving popular in Australia and America.

“I’m so grateful for the show and proud of my part in it. I sometimes pinch myself that I was in it and that it was so successful. I was in the throes of a burgeoning stand-up career at the time when we made it, and that was always my focus at the time; we’d be rehearsing during the day and I’d be gigging at night. I arrived in London the year before and things were going well for me, and Father Ted was almost like a distraction from that, a brilliant distraction obviously. At the time I didn’t know what that would mean for my career.”

When you grow up in a border area of Ireland, people are cagey and keep their head down. Showing off was a really terrible thing to do; it’s up there with armed robbery…

After Father Ted, Ardal’s stand-up career took off as he toured in front of sold-out crowds across the world, made acclaimed festival appearances in Edinburgh and Montreal, filmed his own stand-up special for Comedy Central (US), released two live DVDs, and appeared on Live At The Apollo. Meanwhile, in 1998 he published a bestselling novel The Talk Of The Town, which was translated into several languages and voted as one of the 1001 Books To Read Before You Die.

On the TV front, he starred in BBC’s My Hero as a regular guy called George who also happened to be Thermoman, is the lead detective in Death In Paradise (back on BBC One in January), appeared in Doctor Who and Skins, and presented several documentary series including the BBC NI programme about Irish showbands, Showbands And Me. On the big screen, he played concerned dads in coming-of-age dramas Twice Shy and Handsome Devil. But stand-up remains his first showbusiness love, and Ardal gets almost giddy over the prospect of taking a show onto the road. “I’ve been lucky to have other dimensions to my career, but I’m constantly drawn back to stand-up; there’s something compulsive about it. For this tour, I have a modest saloon car and my little bag of jokes and a toothbrush. I always enjoy touring, and going up and down the country. I do love the performing aspect of it but equally, I love the whole process of it, engaging with the world, and trying to figure stuff out. Stand-up is the best medium for that.”

Next
The Cityist. How to be the perfect ‘new normal’ customer
Start typing to see results or hit ESC to close
bristol gender film tv history
See all results