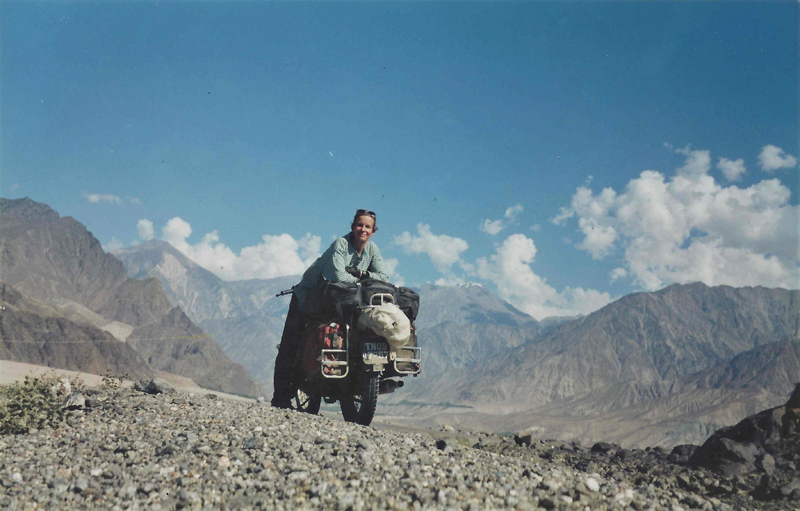 Last month Jacqui Furneaux’s trusty motorcycle starred in a political film for live arts festival In Between Time at Arnolfini, which got us wondering what other adventures it had been on. Turns out, it’s traversed the globe. Jacqui filled us in on their inspiring shared past…

Little did I know when I was an 18-year-old student nurse at Bristol Royal Infirmary in the late 1960s, being shouted at by the fiery ward sister to tidy the beds or scrub the sluice, that one day – a long way off – I would pack in my long career and ride around the world on a motorbike. Even 10 years before it happened I was still the happily married mother of two teenage daughters. If someone had suggested that the course of my life would change so dramatically I would have told them they must have me mixed up with someone else.

The summer of 1976 was long, hot and dry and despite my experience working in the casualty department and dealing with motorbike road traffic accidents, against my better judgement, I agreed to my husband’s suggestion of cooling off by riding his Honda 70. He minded our small daughters and I set off on the quiet roads of Headley Park. After 20 minutes I was hooked. I took my motorbike test in Bedminster at a time when if you could stop when the examiner stepped into the road with his arm raised and you could answer a few questions from the Highway Code, you were deemed a competent rider. I passed and have owned a motorbike almost ever since.

TBM: Did your line of work come in useful while you were away?
Jacqui: My excellent general nurse training at the Bristol School of Nursing, my subsequent training to be a psychiatric nurse at Barrow Hospital and working as a health visitor stood me in good stead for many of the events that took place during the seven years I was on the road with my 500cc Enfield Bullet. Not least, the ability to keep a cool head when things went awry. I could see my leg was broken after a truck ran into me on a mountain road in Pakistan, but quite calmly corrected the strange direction my foot was pointing in rather than have someone else do it. It just seemed the best thing to do. I also think that my experience as a nurse furnished me with the ability to approach people with confidence and warmth and to not be afraid.

Which countries did you find the most and least hospitable?
Pakistan and New Zealand were the most hospitable. No country has been inhospitable but I travelled with some frightening Australian and Italian skippers on small boats in South-East Asia and South America.

Did you encounter any extreme acts of kindness?
Absolutely. That is what struck me the most. We fear that we’ll be left stranded in need somewhere. But it never happened like that for me. A solution to every problem always presented itself or someone came to help. I began to feel I had a guardian angel but what I think happened was that I learnt to trust people. Making oneself vulnerable gives people the opportunity to be kind.

What did you miss about Bristol?
Wallace and Gromit. They are mentioned in my book!

What moments might not have come about without the rough times?
Teaching English in Islamabad when my broken leg was healing. It was almost worth breaking my leg for; I had a great time, relearned some English grammar and met some wonderful people.

Funniest moment?
As you might imagine, there were so many during the years I was travelling. I found myself in many hilarious situations. Living for months with a family of Pakistani comedy actors when my leg was broken was pretty amusing! Recently, my bike was in an art installation called The Ride at the Arnolfini. 65 people came to be filmed, sitting on it with the artist against a moving back-projection and industrial fans to reproduce a fictitious ride. Having my funny old bike used for this tickled me pink but I loved the whole experience.

Were there moments when you felt bored with travelling?
Yes. Sometimes it was all too much. I felt like a spoilt princess even though at other times I felt like an aimless wanderer.

Most surreal experience?
Outback gods answering all my wishes in Australia.

What was the best thing you ate?
carried tins of sardines, dried peas and a bag of rice as my basic food when I was alone in deserted places. Breakfast of fresh fruit from the market in Papua New Guinea was very special. Passion fruit were so prolific, I almost made myself ill with them!

Who were the happiest people you met?
I stayed with a family in a tiny village in Mexico where there was no guest house. They had few needs, were noticeably content with a simple life and I found myself envying them.

What did you learn about yourself?
That I am as good as anyone else and most people are kind and good.

When did you know it was time to come home?
After almost seven years, travelling had become a way of life. I don’t want to spoil the story for anyone who may want to read my book but it was a good thing.

…I began to feel I had a guardian angel but what I think happened was that I learnt to trust. Making oneself vulnerable gives people the opportunity to be kind…

What are your thoughts about the Dutchman now, as the catalyst for this memorable chapter of your life?
I hope he is really happy and although we are rarely in touch, I acknowledge his importance in changing my life. I am, and will always be, immensely grateful to him.

How did you adjust to life back in Bristol?
Not very well. It was hard coming back to this country after seven years of being on the road. I lived on a large barge in the harbour at first. I think Bristol was and is the best place for me. It’s such a sociable city and the choice of activities and entertainment prevented me from grieving for my travelling life. I now live in the lively city centre which I enjoy. I still do a lot of travelling with the bike though.

What is your next adventure?
I don’t know yet. I spent last winter with the bike in Australia so am looking forward to being with my family this year. As usual, I shall wait to see what happens!

Are there places or challenges you’d still like to tick off?
It once took me all day to ride an extremely difficult track in Indonesia to see a turtle lay her eggs on a deserted beach. It was the most moving experience. She wheezed up the beach, dug a hole in the sand with her flippers, laid dozens of eggs and returned, exhausted, to the sea. Our labours to get to the same place inspired me to decide I would never have to prove anything to anyone ever again. Including myself. So no more challenges for me! I’m not a tick-list person, preferring to accept what comes my way – but that could be because I am indecisive…

What are your ambitions for 2020?
To keep riding the Enfield wherever and whenever I want to. It is still my only means of transport. We have ridden 74,000 miles together. It will be 20 years old next March.

What would you say to anyone nervous about taking on an adventure?
Go and make some memories. I don’t regret a moment of it!

Hit the Road, Jac! Seven Years. Twenty Countries. No Plan is available from Amazon.UK, Kindle and Audible or jacquifurneaux.com