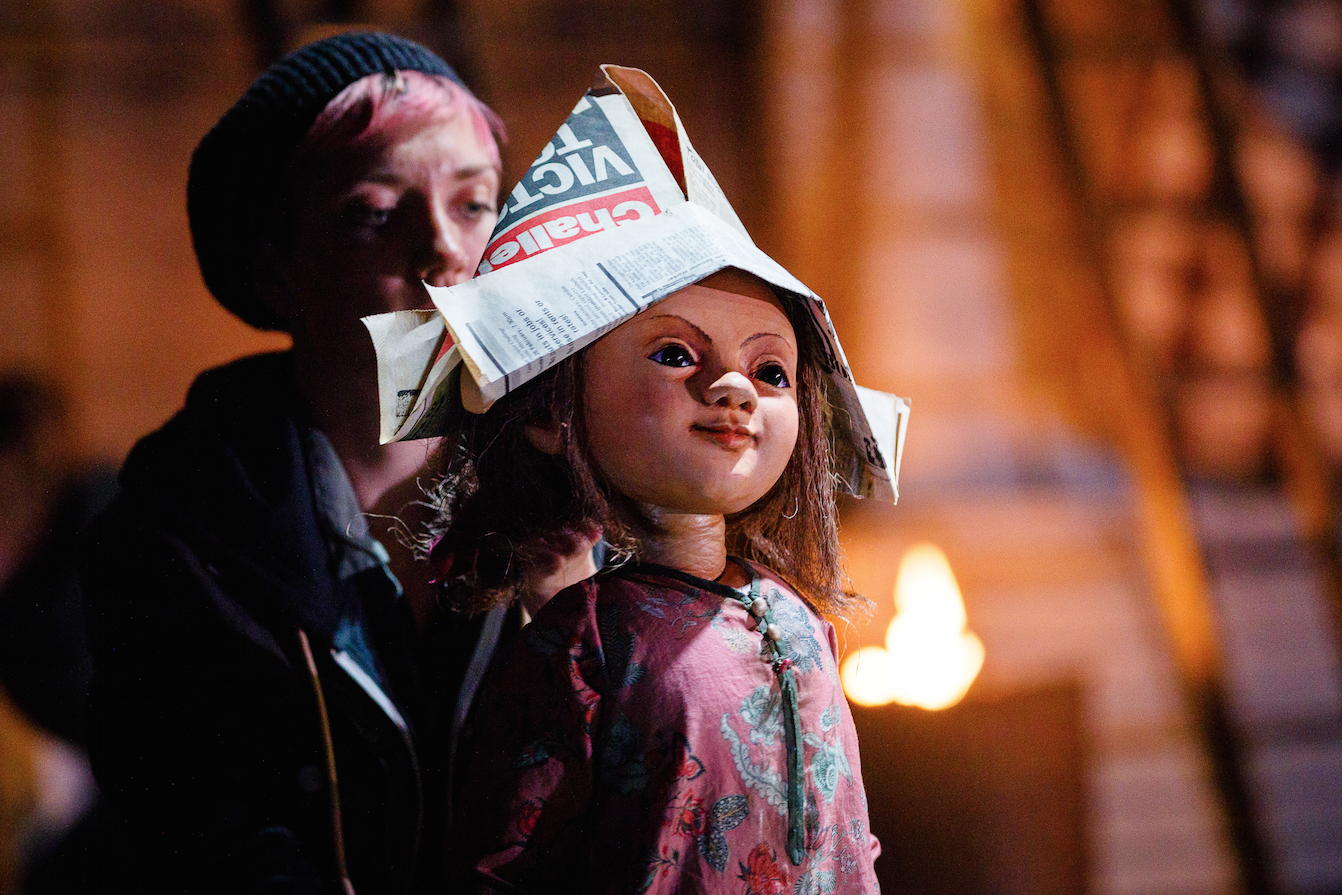 If you’re up for more than the standard of straightforward and facile family fun from your festive entertainment choices this season – by way, say, of some more meaningful, socially conscious theatre encouraging empathy for those less fortunate at the most wonderful time of the year – then The Little Matchgirl and Other Happier Tales at Bristol Old Vic is just the ticket.

Directed by Emma Rice, written by Joel Horwood and co-created with Shakespeare’s Globe, the production begins with an unsettling scene introducing our titular ‘impoverished heroine’ – a homeless puppet girl deftly and heartbreakingly brought to life by Edie Edmundson – and does away with the customary happy ending, instead reminding us that for all the light there is always the dark; imbalances in the world that shouldn’t be ignored.

Shivering in the winter air while selling matches to soldiers and passers-by, she strikes a few in hope of a moment of warmth – each one conjuring a magical, barmy new world to escape into, based irreverently on Hans Christian Andersen folk tales. The first stars the feisty yet vulnerable Thumbelina (the excellent Katy Owen), a lonely, orphaned war refugee who speaks to us in comical rhyming couplets while searching for a place to call home, avoiding advances and brute force from male characters – controlling toads, malevolent moles – who seem to think she owes them something, and finally falling in love with a beautiful man-sparrow, as you do. There’s another stand-out performance from Niall Ashdown as Ole Shuteye, the somewhat anarchic owner of the vaudevillian show troupe that frames the show and the stories within it – there’s a touch of the Jim Broadbent/Harold Zidler about him, or Mark Gatiss whenever he plays a rich, old buffoon. His second star-turn, as a vain ruler presiding over terrified, gullible subjects (fertile ground for witty contemporary asides), provides us with a few rip-roaring moments after another strike of a match sees The Emperor’s New Clothes unfold before us. With dreams of being the face of Facebook, the twit of Twitter (but, wait; that position has already been filled, hasn’t it?), he unwittingly enlists a ridiculous pair of charlatan German tailors, who enter and exit like the love children of Eric Morecambe and Austin Powers, and trick him into parting with his cash to fund the ultimate fashion creation. This middle tale is a real highlight, concluding with the shocking naked truth that prompts peals of laughter from the very oldest to the very youngest in the room. More memorable moments come courtesy of the Iberian beetles that break into song and dance à la The Mighty Boosh; and the exquisite live soundtrack from the musicians following the characters round the stage like a group of travelling minstrels. All the while, our heroine looks on – Edie Edmundson’s level of skill meaning we rarely register the puppeteer’s presence, with all eyes on the silent but oh-so expressive Little Matchgirl. After her last match sparks a story of broken trust and lost love – The Princess and the Pea – we’re back to reality with a bump as her homeless cohorts huddle round a fire lit in an old oil barrel, and as the smell of spent matches fills the auditorium, her own flame slowly fades to black on the freezing winter streets.

As a real mishmash of music, laughter, puppetry and magic, there’s more than enough festive fun here, but the hint of darker themes also at play, asking us to think of those in need and how we can help them, raises The Little Matchgirl to a more rounded and balanced piece of yuletide theatre. (It should probably, however, come with a little caveat to prepare families with young children for the sorts of issues addressed…)

“Is this what people want at Christmas?” as director Emma Rice asks herself at the start of the programme. Perhaps, perhaps not – but it is quite possibly what we need. We should be challenged, as should the status quo, and we’d expect nothing less from the ever-brilliant Bristol Old Vic. Previous
A Guide To Choosing the Perfect Christmas Tree