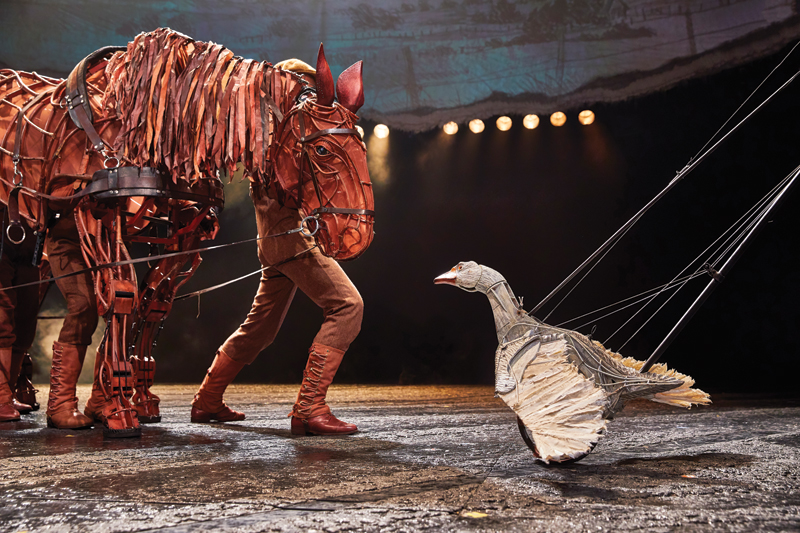 Ten years on from the day that War Horse first galloped onto the National Theatre stage on London’s South Bank, the remarkable, moving tale of one young boy and his horse has captured the hearts and minds of audiences across the globe, and remains as fresh, powerful and affecting today as it was when it premiered in 2007.

Based on the 1982 best-selling novel of the same name by children’s writer Michael Morpurgo, War Horse tells the tale of the relationship between young Albert and his beloved horse Joey – a muscular bay stallion/draught horse cross who clearly wasn’t destined to become Albert’s family’s farming plough horse… but really didn’t intend to accompany the British Army to France in 1914, either.

The year before the First World War breaks out, Albert’s father Ted buys Joey at an auction, paying an exorbitant amount given how poor Ted’s family was in order to put one over on his estranged brother Arthur, who also wanted the horse. Joey and Albert become firm friends… but Arthur wants payback. He gets Ted drunk and makes a bet with him: if Joey can be taught to pull a plough, Arthur will pay Ted the 39 guineas he paid for Joey, and the family can keep the horse. But if Joey fails, Arthur will take the horse for his son Billy. In the nick of time Albert manages to get Joey ploughing, so Ted gets his cash back, and Joey gets to keep his horse. Except he doesn’t…

News of the outbreak of the First World War reaches Devon. Ted sells Joey to the Army for £100 – and as if we haven’t already endured enough heart-wrenching threats of separation for Joey and Albert, it’s at this point that the tale really begins.

Even if you’ve never personally experienced the utter magic of the stage production (or indeed, even if you’ve never seen Steven Spielberg’s 2011 film version, or read the book), you might think you know all there is to know about War Horse, as its equine star has become something of an A-lister over the last decade; even HM The Queen had a private audience with Joey when she toured the National Theatre on its 50th anniversary, and he saluted her from the roof of the National during the Diamond Jubilee river pageant. But put any preconceptions you may have on hold – this is theatre as you’ve never seen it before.

Head twitches, whinnies and neighs; tail flicks, canters and trots – every characteristic that makes a horse a horse, from faltering foal to magnificent stallion, is meticulously and affectionately brought to life on stage, courtesy of puppets activated by just three people.

Meanwhile, life on a farm and life in the trenches are recreated equally convincingly, courtesy of clever lighting, and hand-drawn, occasionally animated backdrops that offer context without  imposing on any scene. It’s all so simple – and yet, it’s one of the most  richly-detailed, breathtakingly emotive  spectacles you could imagine – and imagination, really, is what this dramatisation is all about.

Not everybody who goes to see War Horse will have the opportunity to see Tom Morris, who co-direct the original West End production, coming on stage at curtain call to talk to the audience, as he did on this evening to mark the exact date of the drama’s tenth anniversary. And although Morris paid due homage to the writer, the production teams, the cast and the audiences who have supported what was originally a rather whimsical project that began life as a “crazy idea” in a tiny room at the National Theatre, he also reminded us of an essential element of the theatrical experience that’s so innate most of us never stop to think about it.

Joey, his equine companion Topthorn and the supporting four-legged cast aren’t, of course, real horses – they are, in Morris’ words, “just a collection of sticks, material and some other fancy bits.” It’s down to us, the onlookers, to make them come alive. When we coo at Joey as a foal taking his first faltering steps, or urge him to plough, plough, and plough on when his fate is in the balance, or agonise with him as suffers the trauma of action on the Somme, or shed tears when he and Albert are eventually reunited, it’s our imagination that’s allowing us to take that journey with him.

Yes, the production is flawless in execution. Yes, the cast, from leading roles to supporting characters, are as expressive, or as graceful, or as funny, or as fervent as each scene requires them to be, combining to create an ensemble that’s as smooth-flowing as a breeze across a field of wheat. The music and occasional chorale pieces are subtly passionate, or effectively visceral, or just simply gorgeous too.

But essentially, War Horse takes us back to a time-honoured theatrical tradition that cinematic special effects, CGI, VR and all the other contemporary technology ‘innovations’ that allow our emotions and our intellect to disengage can never do. “When storytelling is this good, it is always hard to forget,” said Morris.

As one of the lines towards the end of Michael Morpugo’s book goes, “we don’t belong in the same universe as a creature like this”. But in fact, we do. We just need to remember to allow ourselves to embrace the same universe, while never forgetting that storytelling can allow magic to happen, too.