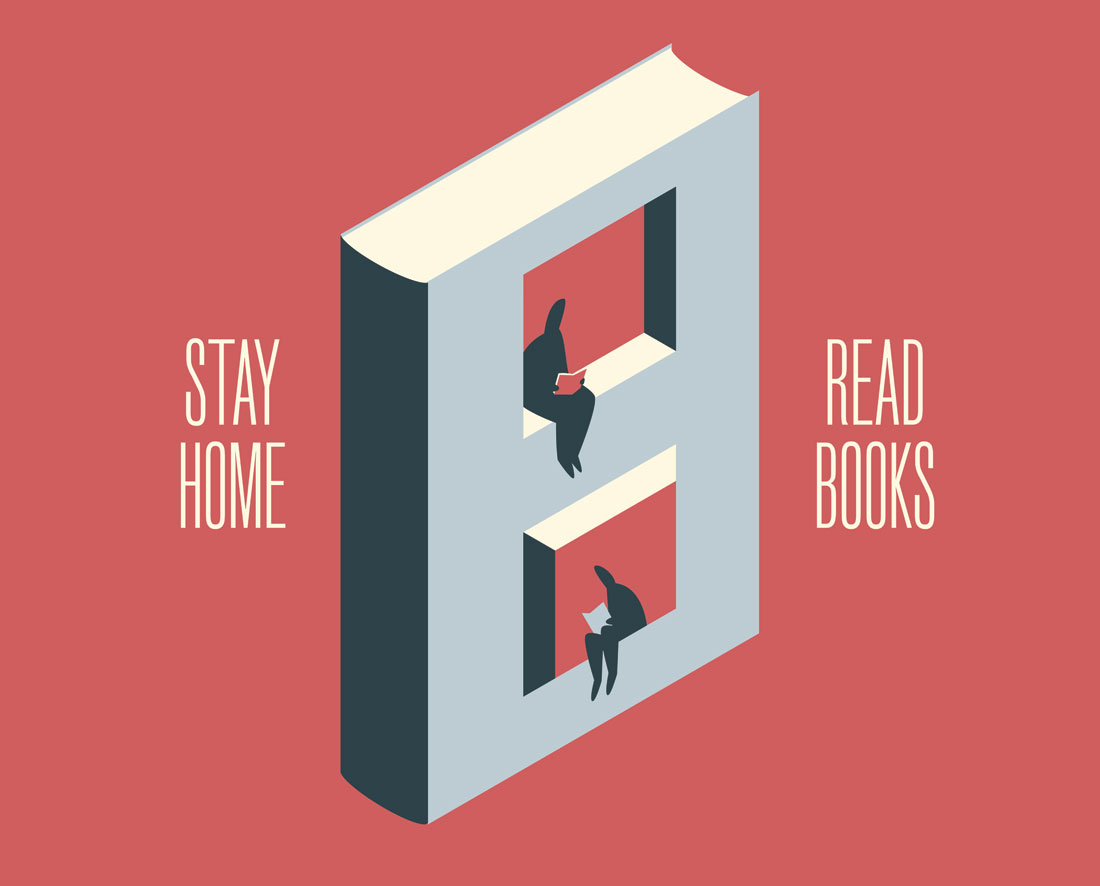 Many of us have plenty of extra time on our hands – and so, asks Melissa Blease, what are the best classic reads for Lockdown?

‘Must-read books’ features are very much in vogue right now, and we all have our own personal list of titles in the back of our minds that we keep telling ourselves we’ll get around to reading some time – well, that time is now.

As Stephen King once said, “books are a uniquely portable magic”. A novel speaks directly to the heart, soul and mind of the reader; it can entertain, enlighten, absorb, offer escapism and expand your intellectual and emotional horizons in a way that no film, play, evening down the pub or any other form of entertainment can. You can read any time and anywhere you want to – and you can read about any time, any place and anyone you choose.

While there’s no such thing as a ‘must read’ or ‘should read’ book – such recommendations are, of course, entirely subjective – a good list can allow you to experience locations and circumstances you’d never otherwise visit, where you meet strangers who turn into lifelong friends.

With that in mind, here are the 12 books I couldn’t face lockdown without… today. Yesterday, the list was slightly different; tomorrow, it might well change again – my love affair with books (and writers, and characters thereof) is a never-ending story.

Considered by many to be Fitzgerald’s magnum opus, this small but perfectly formed novel (less than 50,000 perfect words) is packed with big ideas on themes including nostalgia, freedom, love, social hierarchy, mortality, aspiration, inequality and decadence. Set across fictional Long Island locations during the summer of 1922, and narrated in memoir format by young, reflective Nick Carraway, the story focuses on the charismatic Jay Gatsby – a mysterious millionaire at the epicentre of a glamorous, chic clique of hedonists – and his complicated obsession with Nick’s beautiful, flighty cousin Daisy, one of Gatsby’s ‘set’. Evocative, extravagant, elegiac, exquisite and ethereally elegant.

Sprawling, unconventional, groundbreaking example of postmodern metafiction – or, satyrical, encyclopedic tragicomedy addressing themes around freedom, addiction, desperation, fate… and tennis. Intensely serious, seriously funny and yes, seriously lengthy (1,079 pages! Phew!). The story comes with so many endnotes* that the reader is required to use at least two bookmarks (and possibly wear a rubber thimble) at all times, and DFW is a fan of very, very long sentences. But get yourself over all that, and Infinite Jest is, purely and simply, a gripping detective novel: consider Hal Incandenza’s fate at the start of the novel and then piece together, tiny detail by tiny detail, exactly what factors and influences led him to where he ended up. Hilarious good fun.

*388, some with footnotes of their own

Profoundly moving, sincerely honest and ferociously funny, this voluminous semi-memoir chronicling Eggers’ guardianship of younger brother Toph following the death of their parents fully lives up to its ambitious title. Although the style strays onto postmodern metafiction territory at times, the flamboyant literary fireworks that offer a vivid insight into the life of a young man coping with grief, loss and a search for post-tragedy continuity for his family make for a poignant, dynamic and – yes – staggeringly beautiful read that lingers in the consciousness long after the last full stop.

Dysfunctional family dynamics a go-go in this epic, perceptive, massively successful page-turner that defined Midwestern American middle-class angst at the end of the Millennium. The Lambert family are about as far removed from The Waltonsas you can get (father suffering from Parkinson’s disease; mother disappointed, regretful and envious; grown-up kids despondent, depressed and issue-laden) and yet… there’s humour and humanity here in spades, and more than a hint of upmarket soap opera only barely hidden beneath the sullen, solemn ‘serious literary fiction’ vibe.

Classic, atmospheric horror story – or, an incisive, portentous analysis of the impact of the Industrial Revolution on humanity? You decide. And while you’re making your mind up, bear this in mind: Mary Shelley wrote Frankenstein at the age of 18, while holed up in a Swiss chateau on the banks of Lake Geneva with her future husband Percy and their legendary cohort, the “mad, bad and dangerous to know” Lord Byron. In self-imposed lockdown, the trio had a competition to see who could write the best horror story; it’s safe to say that Mary won.

Joyce’s highly detailed (700-plus pages) account of one ordinary day in the life of ‘ordinary’ Dubliner Leopold Bloom results in one extraordinary novel that continues to define experimental modernism almost a century after its publication. On one level, the stories within the meandering tale echo the experiences of Odysseus in Homer’s epic poem The Odyssey. Take it as a richly detailed, up-close-and-personal Dublin diary circa 1904, however, and it’s a straightforwardly addictive read, woven together with imaginative language and shifting styles that keep attention levels up throughout.

Widely regarded to be Russian literary behemoth Leo Tolstoy’s masterpiece, this epic, sprawling drama chronicling the impact of the Napoleonic era on Tsarist society runs to 500,000-plus words. But, once you get into it (which you will, and fast), time – and the pages – fly by, carried along by Tolstoy’s benevolent and even-handed portrayal of a diverse roll-call of characters, from peasants to nobility by way of servants, musicians, rogues, diplomats, vagabonds, socialites, gypsies, rogues and many, many more.

We’ve all experienced a Catch-22 situation: you need work experience to get a job, but you need to get a job to get work experience; you’ve lost your glasses, but in order to find them you need your glasses; you want to be really clever and understand the exact origin of the expression Catch-22, but in order to do that, you have to read the actual book… and you should, because it’s a slick, smart, witty satire on the futility of war and the absurdities of military life told from the perspective of young, alienated antihero Captain John Yossarian, a US Air Force bombardier.

Orwell’s iconic dystopian 1949 novel predicts the consequences of totalitarianism and soul-destroying mass conformity. How? By asking us to consider the scenario that Great Britain has been turned into a province of the Oceana superstate led and controlled by the enigmatic Big Brother and his Thought Police, and chronicling what happens when intellectual idealist protagonist Winston Smith attempts to throw off the shackles of oppression. Absorbing, deeply unsettling and thoroughly, thoroughly modern, 1984 could have been written yesterday – and should definitely be read today.

“On an exceptionally hot evening early in July a young man came out of the garret in which he lodged and walked slowly, as though in hesitation, towards the bridge…” And that bridge turns out to be the place where innocence and redemption battle with damnation and corruption in Dostoevsky’s most celebrated novel, set in Saint Petersburg in the late 19th century. Impoverished ex-student Rodion Raskolnikov needs cash, fast, and commits murder to get it. His original struggles, however, pale into insignificance as the price he must pay for his crime is gradually revealed. One part moral dilemma, one part philosophical analysis, one part paean to penitence – and all parts gripping, from the moment that young man starts walking.

On The Road – Jack Kerouac

Vintage, genre-defining literary representation of the American postwar Beat/Counterculture generation – plus all the cigarettes, jazz, poetry and drugs that dominated that ‘scene’ – in frenzied travelogue format. The legend goes that Kerouac believed that editing a story after writing the original draft was akin to writing a lie. So, the words you read in this book are the words that he spewed out in one massive, three-week writing stint, typing on one continuous roll of teletype paper, and published as-is. As a result, narrator Sal Paradise gets a bit repetitive and boorish at times, but bear with him: plough through the troughs and you’ll find yourself reaching peaks of sparkling poetic prose that make the journey worthwhile.

Lord of the Flies – William Golding

Following a plane crash during a wartime evacuation in which all the adults were killed, a group of pre-adolescent boys are stranded on an isolated island in the Pacific Ocean. Without any grown-ups to offer guidance, organisation and a calming influence, tension, bullying, brutality, mayhem and violence quickly ensues. But as the subtext leads you to consider: would – or do? – adults behave any differently… and is power the fundamental force that drives civilisation forward? Crikey! This is about as far removed from The Swiss Family Robinson as you can possibly get. Jolly good escapism, though.