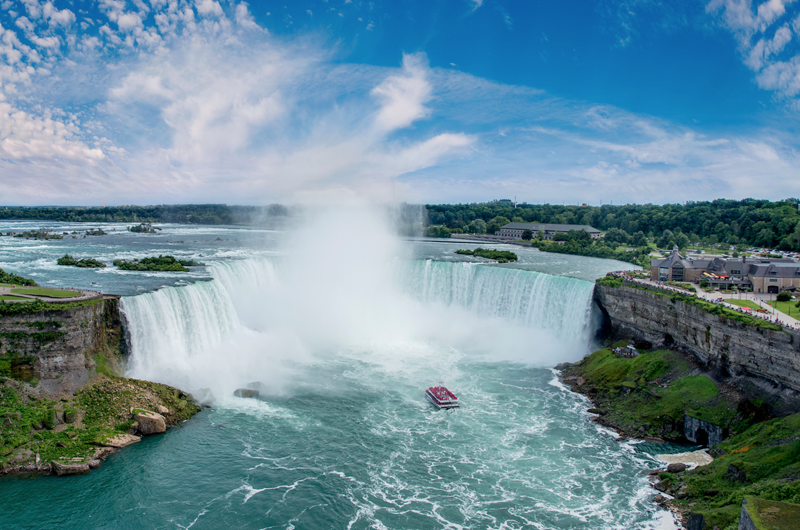 Amanda Nicholls crosses the Atlantic to find fine food and drink, sporting fun, vibrant nightlife and a bustling metropolis butting up against some of the world’s natural wonders

Hogtown, Hollywood North, T Dot, The Six… Toron’o (the second T is silent and you’ll feel ridiculously English if you pronounce it yet sillier if you imitate, so good luck with that) is a city of many monikers. To a visiting outsider they appear definitive terms of endearment – bestowed by a population stoned in love with its environs. (Speaking of which, did you know Canada was the second country to legalise cannabis last year?) National flags flutter from what seems like every corner of this economic capital and you really do feel the sense of pride and fondness; though, of course, this famously polite people would be loathe to brag.

The place loves a party; the bars are jumping with Torontonians even during hibernation in the first days of January. In May, Canadian Music Week puts on workshops with industry pros plus 1,000 bands at 60 downtown venues and Tastemaker proves why it’s a top global food festival, then June takes centre stage with the jazz festival and huge Pride celebrations, while Taste of the Danforth is the talk of the town in August, offering its massively multicultural society a chance to improve its knowledge of Hellenic cuisine in Greektown. Septembers always see the return of the TIFF – the world’s largest public international film festival – which fills the city with cutting edge-cinema and A-list celebs. You never know who you might bump into in a Hotel X elevator.

Toronto has real seasons with very individual charms. In summer it’s reliably balmy while in winter it’s jaw-droppingly chill – during those months it’s tempting to spend a little more leisure time in the underground walkway network The Path, spanning more than 30km of restaurants, shopping and entertainment. Yonge Street, which runs right through town, is known as the longest in the world so moving between the different districts is best done by automobile, especially in the cold, or if you’re exploring central areas, simply hop onto the subway.

Day one
Jetlagged? Start with some gentle discovery of the Distillery District, an area of converted Victorian warehouses offering arts, culture and quirky shopping, or bohemian Kensington Market – a neighbourhood of indie shops and vintage boutiques. If you don’t mind queuing, visit Blackbird Baking Co for top lunchtime goods, or perhaps peruse the Cocktail Emporium on Kensington Avenue – almost like a mixology museum with all the paraphernalia perfect for jazzing up the booze cabinet. (Cherry bitters, books on urban moonshining, bar stools, absinthe fountains…) Nearby Grossman’s Tavern is Toronto’s longest-running music venue if you’re after evening entertainment, namely blues, rock, folk and roots, and Theatre District isn’t far, with the country’s largest concentration of stage theatres.

Day two
As you might expect from this bilingual city, French influences abound. Kick off with a trip to one of the Gallic bakeries just south of Eglinton on Bayview Avenue – Patisserie La Cigogne specialises in Alsatian delicacies while Rahier does a mean selection of viennoiserie. (Or, try the Balzac cake: caramel mousse, pears sautéed in butter, cognac-soaked sponge and almond jaconde.) Head towards City Hall for a post-prandial stroll and see different architectural styles jostling for attention, as well as Nathan Phillips Square where, in winter, you can ice-skate around the heavily Instagrammed Toronto letters that light up at night. After, new speakeasy The Vatican Gift Shop on Gerrard Street East is ace for pizza and cocktails. Decked out with religious accessories and a confessional, it’s brilliantly gaudy (or tragically hip as fans of the “most Canadian band in the world” might suggest).

Day three
See how the Chinese patisserie compares at Lucullus at Highway 7 and Bayview. We tried their take on Canadian classic the butter tart, plus Asian specialities. If it’s a clear blue-sky day, head out of the city limits, passing lakes so gargantuan you can’t see the sides, for a day trip to Niagara. It’s somewhat more surreal an experience than most pictures would have you believe, given that the huge natural wonder on the Canada/US border sits at the bottom of a built-up avenue of shops and casinos. It’s still a must-see, of course, looking like a beautiful, watery abyss at the end of the road. The most luxurious of the casino resorts is probably Fallsview, if you want to splash out on an overnight stay and enjoy the gorgeous vista colourfully illuminated outside. Treat yourself to a trip to Inniskillin for a tour of the icewinery too – grapes freeze and dehydrate on the vine before being night-harvested and producing a single drop of juice each. It seems like a whole lot of hassle until you taste the sweet elixir that results. Niagara Ice Wine Festival in January showcases the best of the beverage.

Day four
Visiting Toronto in summer? Sample ‘cottage country’ culture if you can – just as Canadian as maple syrup. You’ll want to stay over in one of these charming retreats, usually lakeside in Muskoka, where the locals summer. If that’s not an option but you still want some real rurality, you could make it to Algonquin Park and back in a day if you set off early. You can get a taste of what you’d probably envisage as quintessential Canada – lone moose, craggy ridges, glassy lakes and more among the vast parkland. Canoe, snowshoe, cross-country ski, fish, dog-sled, stargaze, horseride or partake in a public wolf-howling session in nature’s playground…

Day five
Back in the city? We decided to get our nails done in the design of the Canadian flag because, well, life’s too short to worry about being a massive tourist cliché… It’s nice at Her Majesty’s Pleasure salon which also has a bar, café and boutique. Looking to show off said talons at a chic watering hole? Try N’Awlins jazz bar just a 10-minute walk away, down King Street West. Be sure, at some point, to chow down on poutine (French fries, cheese curds and gravy plus any number of tasty toppings such as roasted onion and mushrooms or bacon and maple). It’s a dish originating from Quebec but ubiquitous in T.O.

Day six
It’s day six in The 6ix, so it’s only right that it’s spent listening to the city’s most famous recent musical export, who coined this latest nickname. If you’re a fan you could take it a step further and head to Drake’s store on Dundas Street West or try and spot him at a Raptors basketball game. No rich rapper on the radar? Head to the Nightowl on College (the street’s a quick Uber ride from the fashion and entertainment districts) to find retro arcade machines and live music from party-tune purveyors Lonely Hearts, as well as potentially the next best thing: Drake’s face butting up against Justin Bieber, Avril Lavigne, Neil Young and Geddy Lee as part of a giant mural depicting notable Canadian musicians.

Day seven
If you haven’t ticked off Tim Horton’s by now, it’s high time you did. Dealing in coffee and donuts, it’s bigger than Starbucks around these parts and a visit is a rite of passage for any newcomer. Weather good? Pound the pavements around the pretty Harbourfront, check out Ripley’s Aquarium, or ascend the CN Tower for cracking city views, dinner and/or drinks, or harness up and test your nerves by walking its circumference outside.

Day eight
Next, make a beeline for the Art Gallery of Ontario whose collection includes almost 95,000 works spanning from the first century to today. Exhibitions this year include an Impressionism special and a fresh look at Brian Jungen’s sculptures. Lunch at superb Italian Scaddabush and choose from ‘sociables’ such as foccacia with mozzarella, pecorino, cream cheese, baby spinach, artichoke and sun-dried tomato dip; and squash ravioli with hazelnut butter cream and fried sage; washed down with a mandarin vodka cocktail of blood orange purée, strawberries, basil, lemon juice and soda served in a French press for you to steep yourself.

Day nine
Have a chilled one in preparation for the Leafs game you’ve got booked in the evening – right? Torontonians love their ice hockey and are fiercely proud of the team, however well they’re doing, so going to a match or at least watching in Real Sports bar next door to the Scotiabank Arena is kind of a must. Expect deathly silence if the other team scores, fisticuffs here and there, t-shirt cannons and rapturous mayhem if the Maple Leafs get one in.

Day ten
Find a rooftop pool if it’s warm, and relax prior to the flight home (try Thompson Toronto, or Lavelle restaurant which now does day passes). Follow up with patio drinks, a favoured summer pastime at all good licensed bar terraces. Soak up the vibe and the affection; it’s kind of contagious so we reckon you can’t fail to fall in love with Toronto The Good (that’s another nickname right there).