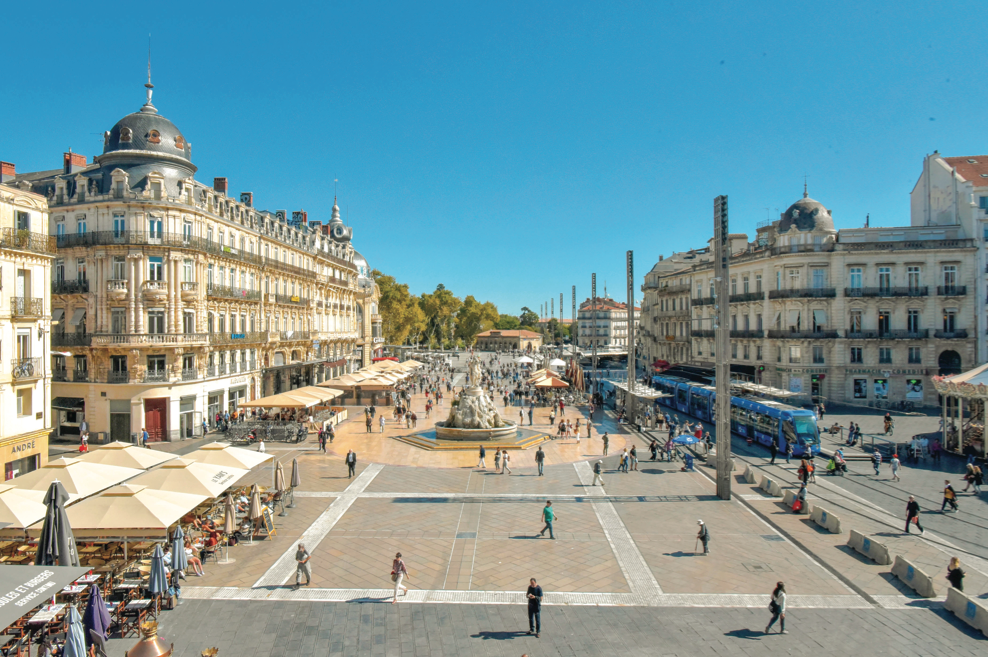 Simon Horsford explores one of the most seductive and inviting cities in southern France, and finds it putting down a marker to be noticed on all fronts

Dotted around the side streets of Montpellier are small posters of President Macron bearing the words “Fake Views”. President Trump has a lot to answer for. But then again maybe we should be blaming someone else. The 16th-century apothecary and supposed prophet Nostradamus, who attended medical school here, predicted that when the pine trees on the old city walls died, Montpellier would disappear. The pines have gone – they’ve been replaced by cypress trees – but the city itself is on a roll and is one of the most seductive and inviting cities in southern France. Fake news has been around a long time.

Less than a two-hour hop away from Bristol after the introduction of easyJet flights in June, the capital of the Languedoc Roussillon region has been dubbed ‘the city with everything’, from the arts to sports. Little wonder the town’s progressive and politically independent mayor, Philippe Saurel, told me he thought of it as “paradise.”

The seventh largest city in France has a youthful vibe too – 30 per cent of the population is aged under 30 – thanks to its thriving universities (Rabelais was a student here) and distinctly liberal feel (it hosted the first gay wedding in France in 2013 at the eye-catching, blue-hued, Jean Nouvel-designed Hôtel de Ville de Montpellier). Architecturally it’s creating waves too, and just before my visit the city had hosted 600,000 people for the annual International Festival of Extreme Sports, while, during my stay, it was staging five matches at the FIFA Women’s World Cup. Montpellier is putting down a marker to be noticed on all fronts.

Exploring the city is joy and easily done on foot – car access is limited, although as an alternative there is an excellent tram service (four lines, each distinctively coloured to reflect the elements). Unlike other cities in the south, Montpellier has no Greco-Roman links, emerging, instead, in the Middle Ages. The result is that the historic heart of the old town, Écusson (it’s shaped like a shield), is a beguiling labyrinth of narrow, high-sided streets lined with tiny shops with everything from vintage clothes to handmade chocolates, artisan jewellery, elaborate bakers and lovely old-fashioned toy shop Pomme de Reinette (dating from 1973).

But as a reminder I am in the present, the ancient alleyways are occasionally daubed with Banksy-style graffiti, or, as my guide Yulia points out, the signature artworks of Mr BMX, whose style is to embed half a BMX bike or a shopping trolley into the brickwork, the latter designed to be a ‘basket’ for people to donate clothes or food for the homeless. Elsewhere in the evening in one of the numerous picturesque squares, I find a DJ pumping out sounds to a swaying crowd.

In the daytime these tiny squares make the perfect stop for a morning coffee or, perhaps, a late afternoon pastis; Place de Canourge and Place de Jean Jaurès are both worth seeking out. The former also leads on to Rue Jean-Jacques Rousseau where I stumble upon not only – reputedly – the city’s best boulangerie, but also a couple of terrific restaurants, Des Marées D’écume (great for lunch) and Le Petit Jardin.

The medieval centre is bracketed by the city’s own Arc de Triomphe, or Porte du Peyrou as it known here, and the wonderfully grand, wide open space of the Place de la Comédie. The former is dedicated to who else but the Sun King, Louis XIV. If you can get on a tour, you can walk up some tiny steps to the top of the arch – well worth it – otherwise make do with a wander down the Peyrou Royal Promenade and gaze at the Corinthian Chateau d’Eau and the Romanesque Arceux aqueduct, constructed in the 18th century, together with a huge equestrian statue of Louis XIV built to mark the end of the city’s flirtation with Protestantism. Try and go on a Sunday when a flea market takes centre stage.

I make my way slowly down to the impressive pedestrian arena that is the Place de la Comédie, with the same Haussmanian-style buildings you’d see in Paris, the Three Graces statue at its centre and with Opéra Comédie at one end and the Jardin du Champ de Mars at the other. It’s grand and evocative with numerous cafés and restaurants. I grab a citron pressé and people-watch during a brief rain shower. Among many events, the square is home to a wine fair in November and a Christmas market.

Back in the historic heart, I pop into the grandstanding gothic Cathedral St Pierre, parts of which date back to the 14th century. Next door is the Faculty of Medicine, the oldest continuously operating medical school in the West – it’s been around since the 13th century. It has fiercely high standards with only around 10 per cent of those who apply each year to study going on to qualify. If you are not too squeamish, take a tour of its Museum of Anatomy and its collection of the weird, wonderful and unmentionable, giving a sobering insight into medical practice over the centuries (it needs to be booked through the tourist office).

If jars containing parts of the human anatomy and wax casts aren’t for you, then try the Musée Fabre, renowned for its 16th – 19th century European art (there’s a striking picture by Delacroix entitled Exercices militaires des Marocains), but also for its works by Pierre Soulages, ‘the master of black’. Just opened, too, is the uber-cool Moco, set in a 19th-century former town house (near the station) with a lovely garden and snazzy bar/restaurant. It’s a showcase for contemporary art in the city, exhibiting regularly changing works from private collections and solo artists – the opening exhibition features sculptures, photographs and videos owned by Japanese entrepreneur Yasuharu Ishikawa.

After a surfeit of art, I go in search of some greenery and where better than the Jardin des Plantes – the oldest botanical gardens in France – looking out for a 400-year-old green olive tree (where over the years people have placed prayers and love letters into the fissures of its trunk). I then peak into Eglise Saint-Roch, dedicated to Saint Roch, who spent much of his life helping plague victims of which he is the patron saint. He holds the same title for dogs and you will see a lot of them in Montpellier – occasionally being carried in a handbag.

So much for the old, what about the new? I make a circuitous journey through the city – via some colourfully inspired graffiti along Rue des Pradiers to Antigone, the fabulous neo-classical inspired district designed by the Catalan architect Ricardo Bofill between 1979 and 2000. Loosely inspired by Ancient Greece, the streets have names such as Place de Marathon and Place de Sparte. Here the dramatic Médiathèque Centrale Emile Zola (the library) and the Piscine Olympique Antigone are set opposite each other – representing mind and body – and resembling the outline of a liner and cruise ship respectively. With the open spaces, lawns and trees, Antigone is a bold sight in more ways than one; my guide Bruno explains that a part of this development of apartments and offices is devoted to social housing again revealing the city’s desire to be forward thinking and inclusive.

Walking through the Place d’Europe, which looks like a post-modern version of the Royal Crescent in Bath, I spot Sou Fujimoto’s ‘White Tree’ apartment in the distance. After reaching the Lez river, I double back towards Philippe Starck’s La Nuage (a complex including a swimming pool, gym and medical centre) in Porte Marianne. It does look a little cloud-like and was supposed to be transparent, but the occupants were unhappy with that idea. Boarding the tram, I move on to Marche de Lez, a little creative hotspot on an old industrial site with a vast antiques shop, hipster barbers, cafés, a creperie and clothes stalls. Even more is promised too as Les Halles du Luz was due to open in June with an array of gastronomic outlets and bars – the kind of places you’d find at Bristol’s Wapping Wharf.

Heading back to the centre, I realise what the mayor meant. This is a city that’s going places; somewhere embracing the old and the new. And it’s a city with a smile on its face. Nostradamus would be relieved.

A few more places not to miss
• With immersive displays such as a sea storm simulator, plus penguins and sharks, there is something to engage all ages at Planet Ocean. And if you need more there’s a planetarium too. It’s in the Odysseum quartier, a buzzing shopping, drinking and eating centre.
• The Mediterranean is only seven miles away so make the most of the beaches: Carnon is one of the nearest. Take the tram and then walk, or cycle, or cycle the whole way.
• For dining, Les T’ocqués (Rue Roucher), Restaurant La Place (Place St Ravy), House D’Anna (Rue des Tresoriers) and La Tomate (Rue Four des Flamme – the oldest restaurant in town) won’t let you down and are well priced.
• Stock up on cheese and an array of beautifully presented foods at Halles Castellane or Les Halles Laissac – the latter’s glass roof is meant to resemble a cantaloupe melon. You might get a bottle of the lovely local wine, Pic Saint Loup, here too.
• Montpellier has top-line football and rugby teams and also is pretty handy at handball, water polo and women’s basketball. Make a date to see one of them in action.

Easyjet flies twice a week to Montpellier until the end of October.