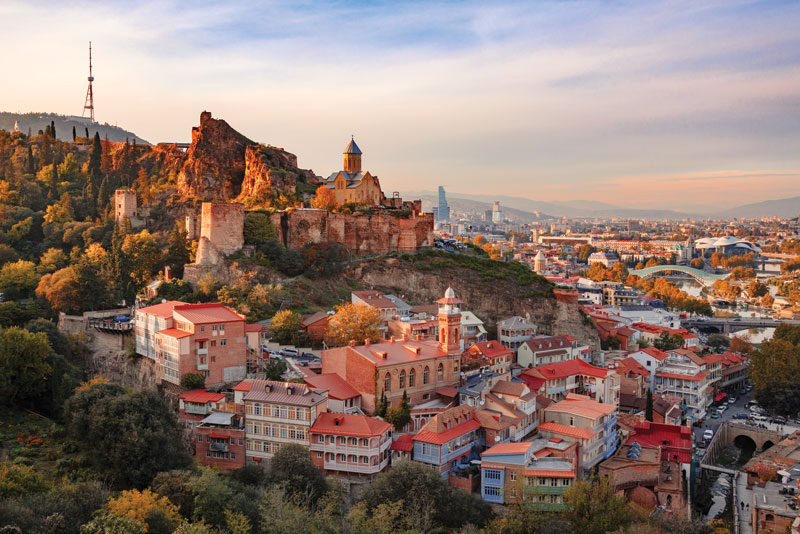 Bristol is officially linked to several fascinating cities around the world. Simon Horsford takes a closer look at the more left field, with a potted history of each and tips for those considering a visit for their next adventure

A creative spirit and irreverent independence are in Bristol’s DNA, so it’s perhaps no surprise that it thought outside of the box when it came to choosing its twin cities. The idea of twinning in Britain was pioneered by Bristol after the Second World War as a way of encouraging and maintaining peace around the world and to forge educational, cultural and commercial links between different towns and cities.

Yes, there are the usual high-profile names: Bordeaux and Hannover were twinned in 1947 and Porto (marking trade links dating back to the 17th century) was added in 1984. But then Bristol went a bit more left field, even rebellious. In 1988, Tbilisi in Georgia was chosen as a way of making a link with post-Cold War countries. Over the following couple of years, the city partnered with Puerto Morazán in Nicaragua and Beira in Mozambique to mark its approval of, and solidarity with, the political and cultural revolutions in those two countries. Meanwhile, Guangzhou’s twinning in 2001 stemmed from a desire within Bristol’s Chinese population and the business community to improve trade links with China. So, that’s the background, but what do we know about this unusual quartet? Here’s a potted breakdown and how they connect with Bristol.

Where is it? A port city in Sofala Province, central Mozambique, Beira lies at the mouth of the Pungwe river and is the second largest city in the country. The port is the gateway to landlocked countries such as Zambia,
Zimbabwe and Malawi.

Potted history: In the late 19th century the city was developed by the Portuguese, who had been in the country for 400 years – the country finally gained independence in 1975. Mozambique was then gripped by a violent 16-year civil war between the Frelimo government and Renamo rebels.

What to see: A place of slightly faded glory, there are some fine,
if run-down colonial buildings (look out for Casa Infante de
Sagres); the heart of the city lies around Praça do Município and Praça do Metical. There are also some old, Mediterranean-style houses around Ponta Gêa too. Beira is known as the ‘the ship graveyard’, with shipwrecks wedged in the sands outside the Macuti lighthouse. Macuti has a sandy beach – popular with local footballers – and the main market and the cathedral, built in 1925, are also worth a visit.

What to eat: It’s well-known on the continent for its food, and there is a strong Portuguese influence with dishes such as peri peri chicken; as well as a strong Arab theme too. The ethnic food of Mozambique is traditionally very spicy and seafood is a staple of many plates. One very local dish is matapa – a stew using cassava leaves, shrimp and peanuts.

Festival time: Compared to many other African nations, there are few holidays and festivals. However New Year’s Eve is big with street parties and fireworks, while International Labour Day (1 May) and Independence Day (25 June) are marked by music, dance, street parties and cultural events.

Where is it: The capital of the province of Guangdong, in southern China, the port (once known as Canton) is about 75 miles northwest of Hong Kong.

Potted history: A financial and commercial hub for the more than 2,000 years, Guangzhou was, for a time, the first stop for many foreign visitors to China. The Europeans arrived in the 16th century and, in the 19th century, the region was involved in the Opium Wars with Britain. Later it became a centre of learning and a hotbed of radicalism – it was at the heart of political activity for the Chinese Nationalist leader Sun Yat-sen and a cradle of the Chinese Revolution of 1911-12. Occupied by the Japanese during the Second World War, the city has seen huge economic growth in recent years.

What to see: China’s third busiest city is a giant metropolis, but has a cosmopolitan flair too and everything from mountains and museums to monasteries and medicine markets. Take your pick of what to experience in this vibrant place, from panoramic views from the 600-metre Canton Tower and the richness of the old city to the exquisitely decorated Chen Clan Academy and the old houses, cafés and galleries of Shamian Island. The Mausoleum of the Nanyue King is also recommended – it houses the tomb of Zhao Mo – as is the Five Rams statue, the symbol of the city, at Yuexiu Park.

What to eat: Guangzhou food is seen as the essence of Cantonese cuisine, integrating traditional dishes, using a huge diversity of ingredients and employing up to 21 cooking techniques. Dishes to try – or brave – include the highly popular wenchang chicken (chicken steamed in a vegetable soup), fried chicken feet in oyster oil, ‘unicorn’ perch and Baiyun trotter.

Festival time: The Canton Trade Fair is held twice yearly, usually in April and October, on Pazhou Island. Elsewhere in the year, there’s the spectacular lantern festival in January; the dragon boat race in May and the Double Ninth Festival in September when the locals climb mountains and drink chrysanthemum wine.

Where is it: A small town in the north-west of Nicaragua, Puerto Morazán lies in the department of Chinandega, next to the Gulf of Fonseca. The nearest city is Leon and it’s some 160 miles from the capital, Managua.

Potted history: Such is the size of Puerto Morazán, with a population of just 16,000, it’s history is very much that of Nicaragua. The largest of the Central American republics, it was the only country in Latin America that was colonised by the British and the Spanish. The country fell under the dictatorship of the Somozas until 1979 when it was toppled by the Sandinista National Liberation Front with Daniel Ortega taking control. The country then became embroiled in a battle with Contra rebels, sponsored by the United States, based in Honduras. The aftermath of the dictatorship, civil and natural calamities have hit the country hard and the city is poor even by the standards of Nicaragua – one of the most impoverished countries in the Western Hemisphere.

What to see: Nicaragua is a hugely diverse country; the western (Pacific) side is dominated by a chain of active volcanoes and the eastern (Atlantic) side is largely rainforest with small settlements along the coast. There are small eco-tourism initiatives and the beautiful and protected Estero Real Natural Reserve, about 12 miles north of Chinandega, is rich in plant and wildlife. Léon (40 miles away) is known for its intellectualism and independence, a fine cathedral and museum and a buzzing nightlife.

What to eat: To eat like a local go to a comedor – a snack bar where you can try chicken, beef or fish with plantain and gallo pinto (rice and beans). Street food can be a good bet; try the bajadas (deep-fried plantain chips) or the quesillo (cheesy tortilla).

Festival time: Semana Santa, or Holy Week, is celebrated in Nicaragua as in most of Latin America so expect processions, music and food (traditionally meat-free dishes). The Day of the Dead is marked at the start of November and resembles Halloween, while Independence Day is also a big deal in September. Many festivals feature dancing gigantona (giant puppet dolls) – Bristol has one that has performed at events and street markets.

Connections: Bristol Link with Nicaragua (BLINC) helps fund a range of developments and encourages solidarity, community and environmental projects, including ones surrounding child health and clean water. There are educational links too and fundraising events, with half marathons and football tournaments raising money.

Where is it? Georgia’s capital lies in the eastern part of the country. Georgia itself is at the crossroads of western Asia and eastern Europe and is bounded to the west by the Black Sea, to the north by Russia, to the south by Turkey and Armenia, and to the southeast by Azerbaijan.

Potted history: Oddly, Georgians know their homeland as Sakartvelo; one theory suggests the name Georgia comes from Christian crusaders in the Middle Ages on account of the country’s devotion to St George. A major Caucasian power and a centre of Christian culture and learning in the 12th century, until invasions by the Mongols and then Turks over the next 200 years devastated the country, which was split into four kingdoms and later annexed by Russia. In May 1918, the region was reunited as the Democratic Republic of Georgia. However, four years later Georgia became part of the Soviet Union until it gained independence again in 1991.

What to see: Increasingly recognised as something of a creative, arts and fashion hub, Tbilisi may be off the beaten track but it’s rich in history with a fascinating old town; the city was on the Great Silk Road. Elsewhere you will find fabulous architecture (art nouveau) and some terrific food. There are domed churches, great shops and art galleries, but check out the Marjanishvili theatre, the National Museum of Georgia and the Holy Trinity Cathedral. It’s essential, too, that you have one of the city’s hot sulphur baths and massages – try the most famous, the blue-tiled Orbeliani Baths.

What to eat: With influences from both east and west, the culinary richness of Georgian cuisine is not to be missed. The unofficial national dish, khinkali, comprises steamed dumplings filled with meat, cheese or vegetables; also look out for khachapuri (cheese-filled pies), which vary from region to region, and meat stew chakapuli. The wine is also fairly special – the country has more than 500 different grape varieties and is considered the world’s oldest wine-making country.

Festival time: Tbilisoba, in October, celebrates the autumn harvest and is held around the Old Town and Rike Park; the same month, the city also has the Festival of International Theatre. Naturally in a country that loves its food and wine, there are events marking the grape harvest and cheese too. Independence Day, 26 May, is also big.

Connections: Aside from educational projects and charitable activities, there are regular music and arts events organised by the Bristol Tbilisi Association, ranging from art displays to literary and poetry readings and film screenings. Mayor Marvin Rees recently travelled to Tbilisi to strengthen trade and economic links as part of a series of events to commemorate the 30th anniversary of the twinning. He unveiled a plaque in the newly refurbished former visa offices at the British Embassy, who named the space The Bristol Room to mark the anniversary. The trip followed an earlier visit to Bristol by a Georgian delegation who attended Encounters Short Film and Animation Festival, where 10 Georgian film directors showed their work.

Featured image: Tbilisi, Georgia, was twinned with Bristol in 1988 as a way of making a link with post-Cold War countries

Next
Gardening: For the love of a fine fragrance
Start typing to see results or hit ESC to close
bristol gender film tv history
See all results