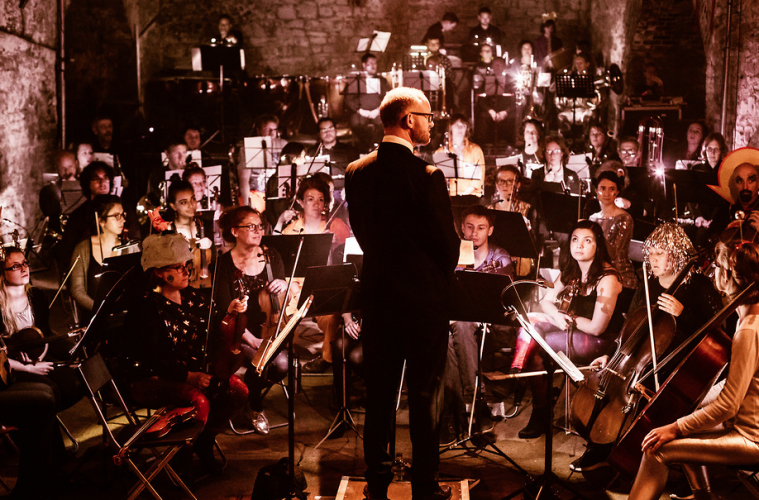 Emma Payne goes subterranean with Insight Ensemble, and ends up on a mission to Mars. Images by Aaron Davies Photography

“Wow, I’ve never seen a man do THAT before!” exclaimed an excitable, pint-sized audience member, as cyr-wheeling performer Pascal Haering defied gravity beneath the ghostly light of a (projected) full moon, to the sound of a solo marimba. Judging by the look of wonderment which spread across the audience’s faces, neither had the grown-ups – this was certainly a far cry from the stuffy formality so often found at an orchestral concert.

Set in the atmospheric, underground Loco Klub, Insight Ensemble’s Outer Space extravaganza certainly succeeded in its aim to bring classical music to a new audience – a goal regularly set out by professional ensembles, but rarely realised in as captivating, humorous and unpredictable fashion as this. The orchestral outfit, established by violinist Anneka Sutcliffe, combined music, dance, audio-visual effects and tricks from The Invisible Circus to breathe new life into a host of well-loved tunes, from Frank Sinatra’s ‘Fly Me to the Moon’ to Holst’s The Planets Suite.

From the outset it was clear that this show was going to be like no other, as our fabulous Jestons-meets-drag hostess encouraged us to ‘freely explore the spaceship’ during our intergalactic mission, before releasing us into the depths of the tunnels. As we advanced further, guided by androids, fairy lights and glittery gymnasts, the unmistakable rumbling strings and punchy brass of Strauss’ Also Sprach Zarathustra (better known as the theme to 2001: A Space Odyssey) marked the beginning of our musical journey. The ensemble’s use of the venue was innovative and engaging, using clever sonic and visual devices to lure the roaming audience from one space to another. One moment you were amongst a full symphony orchestra, the next you were trying to locate what sounded like a toy slide whistle (thanks to Liam Taylor-West’s humorous original composition Clangers in Orbit), before hurrying to follow a group of singers carrying glowing orbs. Thorough exploration of each interactive performance was essential ­­­­– during Beethoven’s Moonlight Sonata I almost failed to spot a pair of gymnastic, extra-terrestrial urchins rolling around the stage behind me, concocting mystical potions with dry ice.

Exciting visuals and unpredictable staging did not detract from the music at the heart of the show, performed with gusto under the conductorship of Johnathan James. Contrasting with the power of the orchestra were Laura Curry’s charming performances of Mozart’s infamously virtuosic ‘Queen of the Night’ aria from The Magic Flute, and the lesser known ‘Song to the Moon’ from Dvorak’s opera Rusalka. Russian opera may not be the first choice for children’s entertainment, but even the very youngest members of the audience were mesmerised by Curry’s engaging manner and Julia Hammersley’s magical harp performance.

If a truly immersive experience is what you’re after, Insight Ensemble is definitely the one to watch. From the interplanetary projections and lyrical dancers to the rousing orchestral performances and fabulous costumes, there’s something for avid music lovers and novices alike. Should you choose to join Insight Ensemble on their next underground musical odyssey, prepare to have your preconceived expectations of classical music shattered…