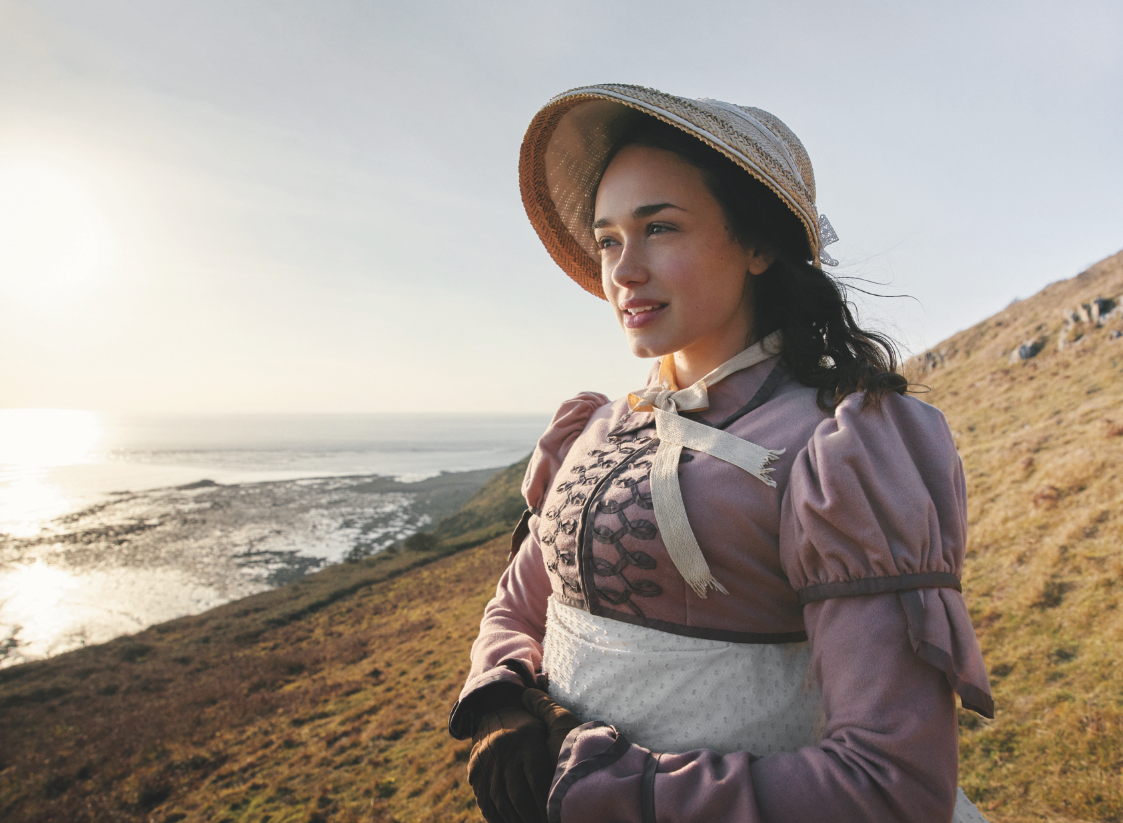 Makers of period dramas face a tough choice when it comes to recreating the past. Do they descend on an old town or stately home and hope to get the shots that will capture the setting of the original book, or do they start from scratch and build an entire make-believe world?

Building a whole new village and set of rooms is exactly what the production team have chosen to do with the new ITV adaptation of Jane Austen’s incomplete novel, Sanditon, set in a fictional south coast seaside town. This latest adaptation has been written by Andrew Davies (who brought TV viewers the popular 1995 BBC production of Pride and Prejudice starring Colin Firth and Jennifer Ehle) and follows young and impulsive protagonist Charlotte Heywood as she moves from her countryside home to the coastal resort, where she is exposed to all of its intrigue and the dalliances of the locals.

The adaptation has been written by Andrew Davies (who brought TV viewers Pride and Prejudice starring Colin Firth and Jennifer Ehle) and follows young, impulsive protagonist Charlotte Heywood as she moves from her countryside home to the coastal resort

Award-winning British set designer Grant Montgomery has literally gone to town at The Bottle Yard Studios in Whitchurch where this corner of Bristol has been transformed into Sanditon High Street. He took me on a personal guided tour of the outside set which stands in for the seaside town, before showing me inside the vast warehouse where he has ingeniously built interiors ranging from a full-size ballroom to a Gothic folly purporting to be in the grounds of a country house estate.

We begin outside where, from behind, all you can see of Sanditon village are flat backs and scaffolding, but turning the corner we find ourselves in 1817, walking down a high street between the facades of houses and shops, where the wealthy and fashionable have newly arrived in town to live alongside the existing fishing community. Looking at the lobster pots stacked up outside one cottage you can almost smell the sea air, but the actual beach scenes are filmed on location at Brean Sands overlooking the Bristol Channel. These scenes include men sea-bathing naked as they plunge into the waves from bathing huts, as was fashionable at the time. Andrew Davies is well known for his habit of embellishing his modern-day television adaptations of the classics with a little 21st-century heat (that Mr Darcy moment: emerging from the water in wet shirt and breeches) so as well as taking a scholarly interest in his treatment of the text we might also be keeping an eye out for the occasional low-brow water-cooler moment.

…Looking at the lobster pots stacked up outside one cottage you can almost smell the sea air, but the actual beach scenes are filmed on location at Brean Sands overlooking the Bristol Channel…

Set designer Grant’s previous successes include the recent film Tolkien, award-winning Victorian drama The Crimson Petal and the White and the Brummy gangsters’ world of Peaky Blinders. He has created something special here with Sanditon, so much so that the set has become a character worth watching in its own right.

The High Street set features authentic looking posters advertising some of the entertainment to be had in Sanditon in Regency times. Visitors to the seaside town could take boat trips or attend a cricket match between the Gentry and the Workers teams, representing the two factions of Sanditon whose worlds collide in this small community. There are lots of little visual gags to be had, with references to Bennet Promenade and a stationery shop called Austens.

Inside the warehouse where the indoor scenes are filmed, Grant and his team have paid close attention to detail so nothing will jar on even the most sharp-eyed viewer. Actress Anne Reid, fresh from her powerful performance in Years and Years, plays the twice-widowed Lady Denham. Her wealth and status is displayed in the jaw-droppingly sumptuous full-size ballroom, complete with a ceiling painted with gods and cherubs among clouds. You really have to pinch yourself that you’re not inside a genuine period house, with its realistic looking marble columns and a serpent picked out in mosaic on the ballroom floor. There is a pair of what, to the untrained eye, look like priceless crystal chandeliers which were lit with real candles for the Venetian masked ball scenes. Across the end wall is a dramatic panorama depicting a bridge collapsing, with people tumbling into the water. And no, Grant won’t tell me how he has created these fake painted masterpieces on a budget.

Actress Anne Reid, fresh from her powerful performance in Years and Years, plays the twice-widowed Lady Denham. Her wealth and status is displayed in the jaw-droppingly sumptuous full-size ballroom

Of course there’s no garden or parkland outside the ballroom; the exterior of Lady Denham’s grand country house was filmed instead at the National Trust’s Dyrham Park, a few miles north of Bath. The crew descended on other West Country locations for filming such as Clevedon’s seafront and, if you watch carefully, you may recognise Charlotte Heywood and her father walking along the banks of the River Frome besides Iford Manor in Bradford on Avon.

Kris Marshall, of Death in Paradise fame, plays Tom Parker – a salesman with grand plans for modernising Sanditon and making it a fashionable resort. Parker’s sense of ambition to be taken seriously as a man of substance is perfectly reflected in his study room. Grant was inspired by architect and collector Sir John Sloane’s house in London and has gone all out on classical allusions, with busts of Caesar and other such heroes, intricate carving and, on the ceiling, in the powerful colour scheme of black and gold, are friezes of bees, the insect Napoleon chose as his favoured motif. A model of Sanditon as Parker would like to re-imagine it stands on a table, laid out in every detail, including a crescent of townhouses inspired by the Circus in Bath and a Chinese pagoda like the Great Pagoda at Kew Gardens.

From Parker’s study we climb through bits of plywood and plasterboard to find ourselves inside the Gothic folly which feels like a love-nest, with its chaise longue piled seductively with cushions. It is here that the characters of brother and sister Edward and Esther set up home together, keeping a greedy eye on Lady Denham and her fortune.

Grant has set up all kinds of treats on set for Janeites (as Jane Austen enthusiasts call themselves) with references that the film people call ‘Easter eggs’, although you might need to screengrab during airing to spot them. In one scene, for instance, there is a first edition of the book Pride and Prejudice left lying around, in another there’s a pamphlet illustrated by the author’s sister Cassandra, while in a ballroom scene there’s a visual nod to the novel Emma via apple blossom. The folly, with its fairytale-like doors and windows, makes oblique reference to Northanger Abbey in which the character Catherine Morland has a fascination for Gothic literature.

Our final part of the indoor tour took us to a cut-away bedroom, its walls covered in green floral and bird-print wallpaper. As through the rest of the set, Grant has given the Austen audience a fresh take on what to expect. There’s not a Regency stripe in sight. This almost feels as though we’re approaching the early Victorian era in terms of interiors, as pattern and colour replace the understated shades that we’re used to seeing in so many adaptations. This is the bedroom of the mysterious Miss Lambe, who Austen mentioned in the book but never got as far as bringing directly into the action – sadly the book remained unfinished, almost certainly due to the author’s ill health and she died within months of abandoning the manuscript. We know little about Miss Lambe other than that she is ‘a young West Indian of large fortune in delicate health’ but, it is hinted, she will be a character to watch. There are no clues in this room as to her personality, so we will have to wait until we see her on screen.

As through the rest of the set, Grant has given the Austen audience a fresh take on what to expect. There’s not a Regency stripe in sight…

Back outside behind the high street set, we squeezed into a tent where the team for hair and make-up were watching the action on small screens to ensure continuity in every scene. Photographs are taken of actors in costume to ensure they look the same as they did in a previous scene, even though weeks of real time might lie between those two scenes. Between takes, the actor Rose Williams, who is playing the lead Charlotte Heywood, joined us for a chat, wearing her bonnet and gown. She was wearing a corset under her dress to give an authentic line, but she told us she has grown used to the corset’s constrictions. Behind her was Young Stringer (played by Leo Suter) and the pair had been shooting a scene together. Do we detect a bit of romance on the streets of Sanditon we ask them? The pair are sworn to secrecy.

Davies is not the first writer to take on the challenge of completing the plot of Austen’s last work, but with his track record I think we are in for a treat this autumn.

Sanditon was made by Red Planet Productions for ITV and Masterpiece. The series is currently being shown on Sundays at 9pm on ITV. All images courtesy of Red Planet Pictures/ITV). Lead image: Rose Williams as Charlotte Heywood