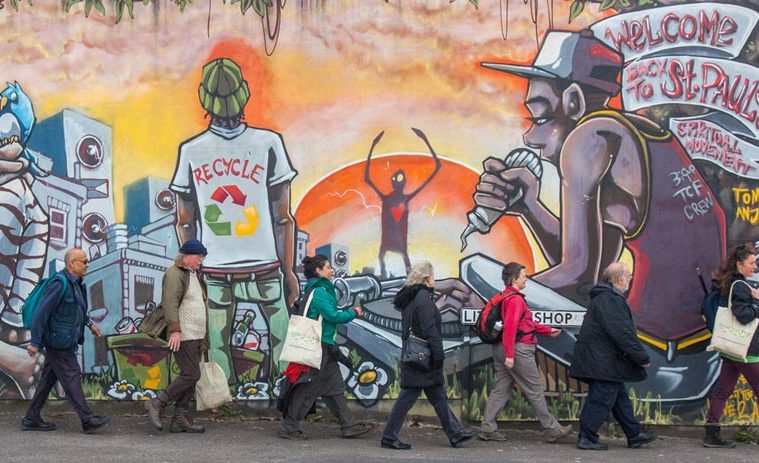 Walk Bris Way: the positive impact of a simple stroll

It seems more of us than ever before are missing out on the health benefits of walking. Here’s why you should start today…

As a nation, our lifestyles are becoming increasingly sedentary. People in the UK are around 20% less physically active now than they were in the 1960s and on average walk 15 miles less a year than two decades ago. The severity of the current physical inactivity epidemic costs the NHS an estimated £0.9 billion per year.

The good news is that we don’t have to do much to turn that around. Getting enough physical activity (professionals recommend at least 150 minutes a week, in bouts of 10 minutes or more) can have dramatic benefits, including a lowered risk of type two diabetes, cardiovascular disease, dementia and some cancers. And the easiest way to start is to simply go out for a walk.

Hengrove resident Michael Hancock, 71, has been living with dementia for the last 14 years and is also receiving treatment for Crohn’s disease. He and his wife Lynn, who is also his carer, joined a local walking group after he was discharged from hospital six years ago. “Walking has been a real life-changer for me,” he says. “My dementia is slightly different in that it’s more about movement. I needed to remind my body how to do exercise again. When I walk, I always feel so much better for having done it – the fresh air does me good. It’s also really good for my memory. I sometimes have a job to remember people’s names, but I’ve met so many people doing this (there are about 35 people in our group), so the more people I see, the more I get to practice keeping names in my head. It’s a really nice and sociable activity.”

And it’s not just on the outside that the change is noticeable, according to Lynn. “When you are unwell, it’s easy to see how life could close in on you, so you’ve to get out there and meet people, and keep doing new things. Doing this has improved things for both of us no end. We do a lot of walks just the two of us now as well, and sometimes our 11-year-old grandson joins us, too. It’s awakened an interest in being out and about, and it’s something we can share, which is lovely,” she says.

As well as improving your physical fitness, there is growing evidence that walking can positively impact mental health, too. A recent study at the Institute of Psychiatry, Psychology & Neuroscience, King’s College London, discovered that the mental health benefits of going for a walk can last for several hours afterwards. Researchers developed a smartphone-based app, Urban Mind, to examine how exposure to natural features when walking in cities affects a person’s mental wellbeing. The results showed significant immediate and time lagged associations with mental wellbeing for several natural features: trees, the sky and birdsong. “These findings suggest that short-term exposure to nature has a measurable beneficial impact on mental wellbeing,” said Dr Andrea Mechelli at the Institute of Psychiatry, Psychology & Neuroscience, King’s College. “It suggests that nature could be especially beneficial to those at risk of poor mental health. From a clinical perspective, we hope this line of research will lead to the development of low-cost scalable interventions aimed at promoting mental health in urban populations.”

Anecdotal evidence from those facing mental health issues appears to corroborate this. Sam Espensen, co-owner and co-founder of Espensen Spirit – a range of naturally infused gins and vodkas – and Redfield bar Bristol Spirit, began walking as part of her recovery from CPTSD (complex post-traumatic stress disorder).

“In my early 30s I went through a really bad time – my father died, I got made redundant and I split up with an abusive partner, all within the space of a few months. I became depressed, very reclusive and shut off. One of the things I did to stop the negative thought patterns and to feel less lonely was to listen to podcasts, which were a new thing then. And the thing about podcasts is that they’re not usually a passive experience – people tend to listen to them while doing something else – so at weekends I started walking while listening,” she says. “From a mental health perspective, walking is brilliant, because it takes minimal effort (when you’re depressed you often have zero energy), and is something you can do on your own if you want to be by yourself. Professionally it really helps me too – if I am stuck on a problem it helps jog my brain. I come up with most of my creative ideas while out walking.”

Brian McCann began his walking journey after leaving the Barrow Hospital some years ago, where he received support for mental health issues. He has since become a walk leader for a local healthy walking group.

“Walking has had a really positive impact on my life,” he says. “I started by going along to the groups as a member, but as my confidence grew I began to take a more active part in it. Now, I am a walk leader, which means I organise where to meet, the routes we take, and I look out for funding opportunities – all the things that go with being a walk leader. I’ve been to so many places I would never have gone to had it not been for the group.”

Being a part of walking groups like this can be a lifeline for those recovering from mental health issues, who can sometimes feel isolated during or after their treatment. “The great thing about being part of a group is that it’s sociable,” explains Brian. “We usually stop at a café or a pub afterwards and you can chat as you walk. You realise you’re not alone when you join a group like this – it cheers you up.”

“Walking is a great way to be active and by getting out, even if it’s just once a day for a stroll, it can make such a difference to your health and wellbeing,” adds Karen Lloyd, manager for Active Ageing Bristol, a local project that offers opportunities to encourage people aged 55 or over to become and stay active.

If you’re thinking of getting into walking, now’s your chance! This month’s Bristol Walk Fest, the UK’s largest urban celebration of walking, takes place from 1 – 31 May, and includes over 150 community walks and events, many of which are free – see p84 for more information.

• Bristol Walk Fest 2018 is coordinated by Active Ageing Bristol, a collaboration between Bristol Sport Foundation, The Anchor Society and St Monica Trust, in partnership with LinkAge Network and Bristol Ramblers with investment from the TravelWest Fund.