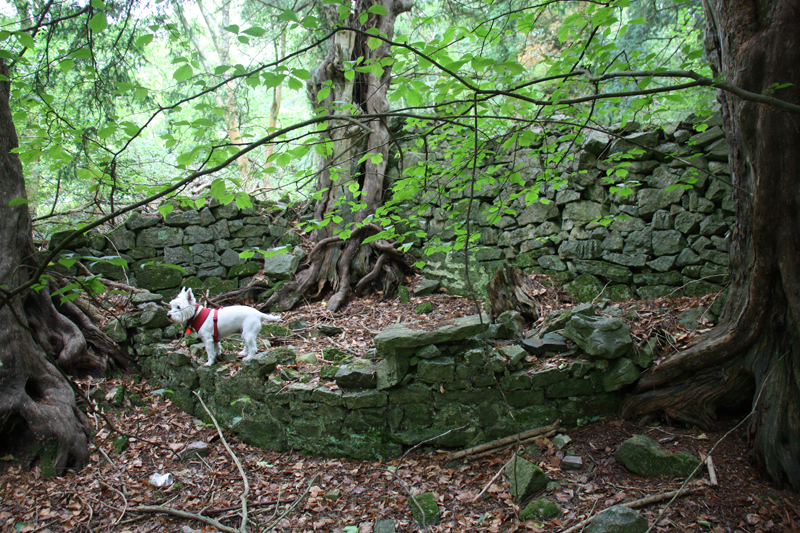 Walk: Call of the Combe

Brockley Combe is a strange and secretive place. Most people will know it, if at all, as a busy, winding cut-through between the A370 and Bristol Airport. Not that long ago, though, it was a celebrated beauty spot. As recently as 1942, one writer described it as “a romantic fairy-like glen of great beauty”, while over 150 years earlier the Rev John Collinson claimed that, “if this spot had the advantage of water, it would be a second Matlock on a smaller scale, but not less romantic and beautiful.” In 1795, when Romantic poet Samuel Taylor Coleridge passed this way, he was even moved to pen a sonnet to its charms.

It also happens to be one of the most haunted places in Somerset. Not that I knew that when I pulled into a lay-by there some years ago to explore its woods. There were no signs or information boards to welcome me to this lonely spot, and nothing to indicate which way I should go – just a gap in a fence and a far from well-walked track climbing steeply uphill. Armed with an OS map, though, I felt sure I would be able to make sense of the paths weaving through the woods.

My confidence was misplaced. All went well for a time, as I chanced upon a broad and rutted track winding through one of the densest woods – thanks to a superabundance of yews – I had ever encountered. Things started to go wrong after I stumbled upon a mysterious group of weed-choked ruins set within a walled enclosure.

Heading past the ruins, trying to follow the path shown on the map, I soon ran into trouble – thick vegetation, barbed wire fences and, before long, in the depths of the wood, nothing to indicate in which direction I was heading. How was I to know that the path I was attempting to follow had fallen into disuse some 50 years earlier? The haunting words of a Rudyard Kipling poem – “but there is no way through the woods” – came uneasily to mind and, though I soon managed to find my way back to the path I had followed earlier, it was to be some years before I felt inclined to renew my acquaintance with Brockley Wood.

This time I intended to be well prepared, digging around on the internet and in old books to glean what information I could on these forgotten woods and their enigmatic ruins.

My first surprise was to discover that until the mid-18th century these woods had been airy downs. It was an 18th-century squire, John Pigott of Brockley Court, who was responsible for the transformation. He had a passion for planting trees, and yews were among his favourites. Over 250 years on, the results of his enterprise are only too apparent.

He also established pleasure grounds with a bowling green on the downs and constructed a carriage drive so that visitors could arrive in style. Remarkably, we know what all this looked like because sketches made in 1788 by an artist called SH Grimm survive in the British Library and can be viewed online. They also show a windmill on the highest point of the downs.

Armed with this information, and with copies of old maps, I was naturally eager to revisit the woods. I was also pleased to discover that new footpaths and bridleways had been established to replace those that had disappeared. Parking as before in the lay-by and squeezing through the same gap in the fence, I joined the broad track which I now recognised as the carriage drive up which visitors rode to the pleasure grounds. 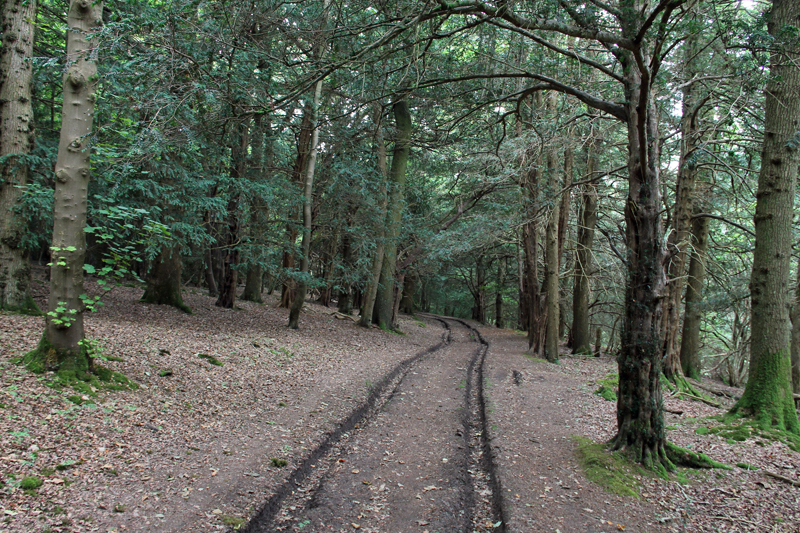 As I approached the site of the ruined pleasure grounds, the idea that the sun once shone on manicured lawns in this gloomy spot seemed preposterous. It also seemed preposterous that, armed with maps, I would fail to locate the remains of the windmill, but so impenetrable was the undergrowth I was forced to abandon the quest.

I had also not anticipated any return of the unease I had felt on my previous visit. Yet – largely because of those yews – few woods cut you off from the outside world so effectively and, so little frequented are they, it is quite possible to visit them without meeting another soul. And this time I had a dog with me, whose trick of seeing things that aren’t there was even more pronounced than usual. She clearly felt uneasy, and not just because of the periodic – and to her inexplicable – roar of planes taking off from the nearby airport. And the more she growled at rustlings in the bracken and started at shadowy stirrings in the branches overhead, the more it began to dawn on me that this would be a perfect setting for a tale of the supernatural.

On returning home, I wondered whether the same idea had occurred to anyone else and, widening the scope of my internet searches, almost immediately discovered a website informing me that “Brockley Combe is thought to be one of the most haunted locations in England”. There were many others in a similar vein.

The most frequent sightings, it seems, are of a coach and four rattling through the woods, driven, according to some accounts, by a headless coachman. One unfortunate cyclist even claims to have had it drive through him when he failed to pull up in time. There have also been reports of a headless huntsman or phantom horseman and, while all the sightings have occurred at night or when the light is fading, other people have reportedly heard coaches approaching, but failing to materialise, in broad daylight.

The spirit of a wayward reprobate, 18th-century parson John Hibbetson, who cheated the family of a local man out of their inheritance, is also said to walk these shady paths. In 1870, the Bristol Times & Mirror reported that “two grave and elderly gentlemen” – a clergyman and a doctor – had had the misfortune to come across it when returning home late one night.

Others claim to have seen the ghost of a young girl wronged in love, who threw herself from one of the crags in the combe. The most celebrated ghost, though, is that of Dinah White, who lived in an isolated cottage and provided refreshments for visitors. A guidebook of 1828 described her as “the guardian priestess of the combe”. Unfortunately, the money she took from visitors proved too tempting for some local ne’er-do-wells, who on 30 December 1833 raided her cottage. So frightened was she that, even though she managed to escape, she was found dead in the frosty woods the next morning.

Should you be tempted to take a look a look at the ruins and the site of this paranormal activity, you can find them by heading west from Bristol along the A370. After passing Backwell village centre, carry on for 1½ miles and, and turn left at traffic lights up Brockley Combe Road, following a sign for Bristol Airport. Continue up the road for just under a mile before pulling into a lay-by on the right and parking by the fence (ST483663; BS48 3DF).

Follow a bridleway sign through a gap in the fence and a steep track bearing right uphill for 200m, before joining the old carriage drive and continuing along it. After 900m, when the track forks, fork left, passing a stand of laurels on your right and carry on for 100m to find the ruins of the bowling green and pleasure grounds. It is, as you will doubtless discover if you make the trip, a fascinating and atmospheric spot – by day at least. Ghosts or no ghosts, though, it is not one I would want to linger in after sunset.

Featured image: Canine king of the ruins, sniffing out the paranormal