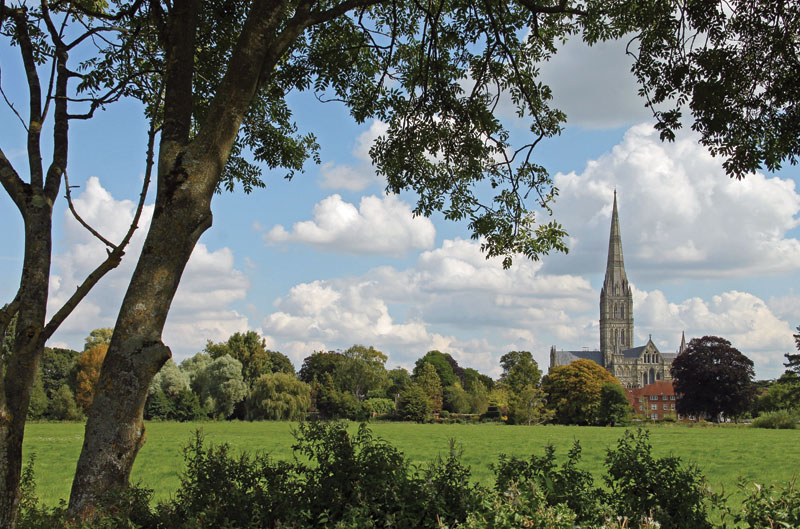 This month we take the train for a walk around one of England’s most historic cities. Salisbury – just over an hour’s journey from Temple Meads – was established in 1220, with the streets laid on a grid pattern. That grid pattern survives today, along with an astonishing number of 13th, 14th and 15th-century timber-framed houses. Salisbury also has a fantastic array of 17th and 18th-century houses, built with local brick – but appearances can be deceptive, for behind many of their facades lurk older buildings. The key to Salisbury’s urban landscape is informality and lack of uniformity, with old buildings being adapted to suit later requirements. This walk is an introduction to its delights – and to some of its quirkier adaptations.

● Arriving at Salisbury by train, turn right out of the station. After 25m, turn left across the car park, cross the road and turn left. At the end, turn right and, by the turning to Fisherton Island, look right for an idyllic view of a row of riverside cottages. 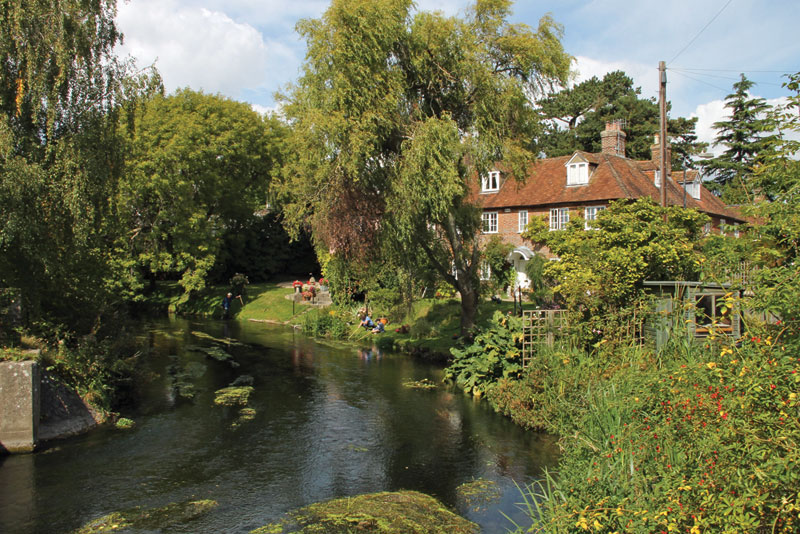 ● After another 50m, bear right along a path, turn right across a footbridge and follow a path through water meadows with a view of the cathedral. After 500m, you come to 15th-century Harnham Mill, now a hotel.

● A right turn across the bridge leads to Crane Street. On your right is Church House, which started life as a 15th-century wool merchant’s. Cross to the north side of the street for a better view of the buildings on the south, with a 14th-century branch of Prezzo at the end.

● Turn left along High Street to find, on the right, the 14th-century Old George Inn, its ground floor converted to the entrance to a shopping mall. Waterstones, on the corner, occupies the old Assembly Rooms.

● Carry on to St Thomas’s church, where a painting of the Last Judgement, reminiscent of Hieronymus Bosch, can be seen above the chancel arch. Follow the path past the church to emerge on a busy street. Bear right and cross two sets of traffic lights to a Market Place of European dimensions, with the 18th-century Guildhall in the far corner.

●  Bear right and go through an alley called Oatmeal Row to emerge by the 14th-century Poultry Cross, with Salisbury’s most traditional inn, the Haunch of Venison, behind. Opposite, the timber frame of Goldsmith’s, long covered by plaster, now stands gloriously revealed.

●  Turn left along Butcher Row, and after passing the back of the Guildhall, look across to a house built for another wool merchant, John à Port, in the 15th century. Turn left along Queen Street to find another old inn – the Cross Keys – whose ground floor has made way for a shopping mall. Venture inside to see a Jacobean staircase which led to the galleries around the inn yard.

●  Carry on into Endless Street, passing another 14th-century building – Nuggs – whose timber frame has recently been revealed. An old wooden window also survives at the side.

●  Turn first right along Salt Lane, left by the 15th-century Pheasant Inn and right by Frowde’s Almshouses, built in 1750. After 60m, bear left through St Edmund’s churchyard. After passing the church – now an arts centre – carry on alongside a wall before bearing right and right again, then turn left along a track leading to an urn. The mound on your right is the only surviving section of the rampart once encircling the city. Follow the track as it curves through the grounds of Bourne House, passing through a porch removed from the cathedral in 1791.

●  Just beyond it, follow steps up to the road, bear right, passing Bourne House – now the Council House – and take the second left along St Edmund’s Street. Take the third right along Milford Street, carry on at the next crossroads, and after passing the Red Lion – whose original 14th-century building lies hidden in the inn yard – you come to Catherine Street. Before turning left, carry on for 50m to the Odeon cinema – and Salisbury’s most bizarre adaptation, for the cinema foyer is the imposing hall of a 15th-century mansion.

●  Head back and turn right along Catherine Street, where on the left, towards the end, the modern shopfront of a fabric store incorporates an old wooden frame. Turn left by the Cloisters, carry on past the Trinity Almshouses of 1702 and a 17th-century townhouse on the corner of Culver Street, before turning right, just before the dual carriageway, along a path.

●  Ahead is St Ann Street Surgery, a fitting introduction to Salisbury’s most fascinating street. Virtually every house in St Ann Street is a gem, but the highlight is Joiners Hall, the best timber-framed house in Salisbury, built around 1635, a little way along on the left.

●  At the end, carry straight on through St Ann’s Gate into the Close – and another world. ‘Great stretches of grass and billowing trees lead your eye to the soaring immensity of the cathedral,’ wrote John Betjeman. ‘Never was so grand a building in so worthy a setting. The houses of the Close, stone, redbrick, flint, Georgian, Victorian, medieval, are a perfect informal group and they set off the vastness of the cathedral.’

●  After 300m, bear right to Matron’s College, established in 1682 and believed to be by Sir Christopher Wren. Instead of carrying on through the gate, turn left past Mompesson House, now owned by the National Trust. At the end is 14th-century Hemingsby House, with an eclectic range of building materials – flint, stone, herringbone tile and stone – and what looks like a blocked arch. Turn left to walk past a succession of extraordinary buildings, including an outstanding museum and, at the end, turn left along the south side of the Close and through a 14th-century gate. 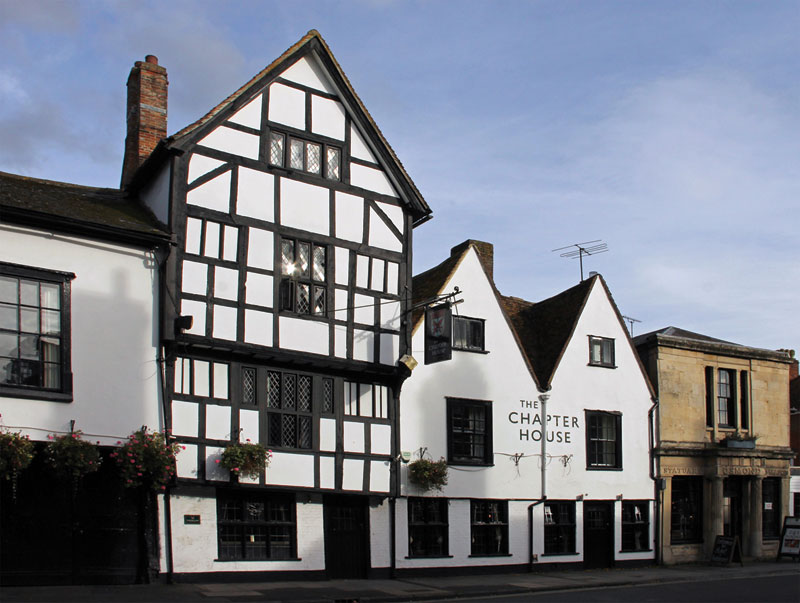 ●  At the main road, look to your right to see De Vaux House, incorporating fragments of a college founded in 1261. Carry on alongside the wall of the Close, bear left along Exeter Street, and, after passing St Ann’s Gate, look across to the Chapter House pub – originally the 15th-century King’s Arms. To the left is another 15th-century building whose first floor was rebuilt in the 18th century to create an assembly room for the inn. The building next to it, with exposed beams, gives an idea of what it originally looked like.

●  After passing the 18th-century White Hart, turn left along New Street, looking out for the Old Forge and the timber-framed, flint and tile-hung New Inn. Carry on along Crane Street and turn right along a footpath before the bridge. After crossing a footbridge, carry on to a clock tower which stands on a corner of the old gaol and incorporates a carving of handcuffs.

●  Turn left past the old infirmary of 1767 – now flats – and after 350m carry on up South Western Road to return to the station.