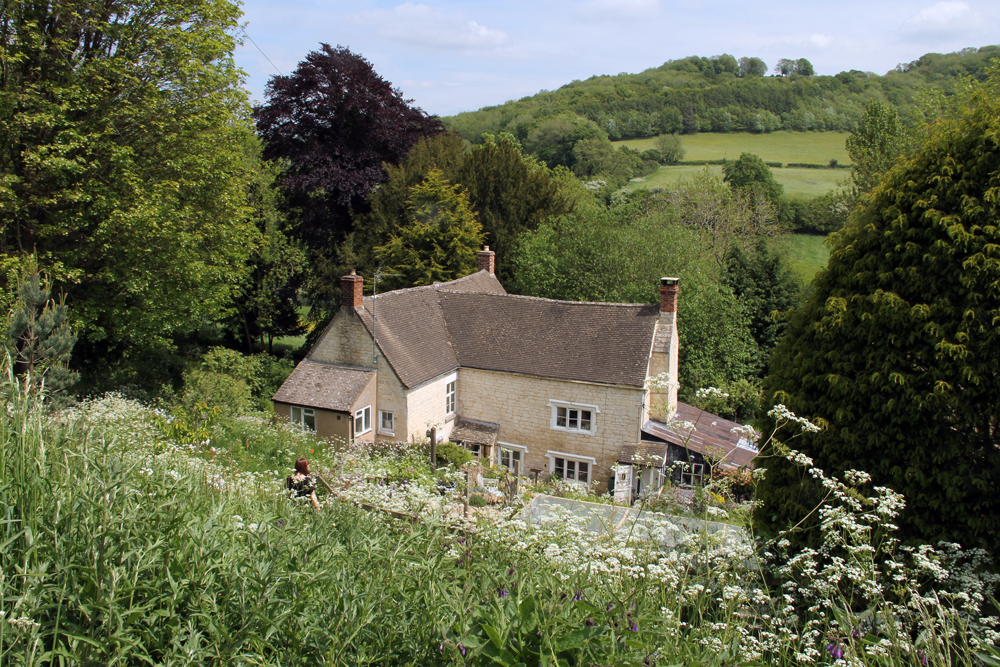 Walking on the Cider Trail

Andrew Swift takes us on a walk through the charming village of Slad, and into the heart of one of the nation’s favourite novels

This month (July) we travel by train to visit the Gloucestershire village of Slad, celebrated by Laurie Lee in Cider with Rosie. The Slad valley is not only remarkably unspoilt, its scenery is very varied. This walk takes you through beech woods, along green lanes, down hidden valleys and across high hills, as well as featuring some splendid seventeenth and eighteenth-century buildings.

As well as looking out for places featured in Cider with Rosie, you will also encounter a series of wooden posts, set up in 2014 to mark the centenary of Laurie Lee’s birth. Each bears one of his poems engraved onto Perspex, so that it can be read against a backdrop of the landscape that inspired him.

● The walk starts at Stroud station – the closest the railway ever got to Slad. Head along Station Road, turn left into Russell Street and right into King Street. Carry on through the pedestrian area and past the Greyhound into Lansdown. By the School of Science & Art, turn left down Locking Hill. At the bottom turn right, cross over and head up Birches Drive. After 120m, when Birches Drive branches right down a cul-de-sac, carry on up the main road – known as Folly Lane.

● After 900m, when the road curves right, bear left to continue up Folly Lane. After passing Worgan’s Farm, the tarmac ends and you continue along a rough track. At a T junction (SO868076), carry straight on along a narrow path beside a barbed-wire fence for 250m before following a broad path through Frith Wood Nature Reserve.

● After 850m, you come to the first poetry post. A little further on, when you reach a busy road, cross and carry on along it in the same direction. This is Bull’s Cross (SO877087), the haunted crossroads celebrated in Cider with Rosie. After passing another poetry post at the end of the lay-by, carry on for 50m before turning right to follow a footpath sign down a green lane.

● This leads to Deadcombe Bottom. Gloomy at the best of times, it is easy to imagine how sinister it was the night Laurie discovered his uncle hanging from a tree – but still very much alive! – after losing his job as a bus driver for drunkenness. ● After 500 metres the path bears right and, after levelling out, curves left. When it forks, follow the footpath sign down to the right. After passing a large pond on the left, carry on across a broad track to head up a rough, steep path. At the top, turn right along a green lane (SO886086). After going through a gateway, carry on, with tarmac underfoot, passing Down Farm, with a striking circular window in its pediment. A little further on is Steanbridge Mill. Sixpence’s cottage, featured in Cider with Rosie, stood across the road on the right.

● As the lane levels out, it passes the duck pond where Fred Bates found Miss Flynn floating among the reeds and where, in the depths of winter, the villagers turned out to skate. A little further along, hidden amid trees, is the old squire’s house, where young Laurie went carol singing.

● Follow the lane as it swings left past Laurel Court and, at the main road, you will see Laurie Lee’s childhood home, now called Rosebank, down to the left. A little further on, just past the church and nearly opposite the school, is the Woolpack, a superb, traditional pub with local beer and cider, where lunch is served from 12 to 3.

● Carry on along the road for 800m, and, after passing Woodside House, you will see a cottage behind high gates on the right. This is the old Star Inn, which closed in 1978. Turn left down a narrow path opposite (SO870067), and, after crossing two stiles, turn left along a lane past Vatch Cottage and Vatch House. Behind the houses on the right once stood Vatch mill, six storeys high, topped by high chimneys and surrounded by ancillary buildings.

● Follow the lane uphill past a turning to Slad Lane and, when it swings right, carry on along a restricted byway. Cross a stile beside a gate on the right and continue across a field. Cross another stile and carry on through a meadow. After crossing a stile, the path leads past a pond, and another stile brings you to a poetry post.

● Bear right to follow a track up the field. Cross a stile and follow a path up between trees. At the lane turn right uphill, turning right at a T junction (SO878070). After passing the hamlet of Elcombe, steps on the left lead into the Laurie Lee Nature Reserve. Follow the path uphill and, after going through a handgate, turn left past a gate into Swift’s Hill Nature Reserve. Keep alongside the wall as it curves right, before following a barbed wire fence along the lip of the quarry, with views across to the Severn and the Welsh mountains.

● When the fence ends, follow an indistinct track ahead and, when you see a gate below, head down to it (SO875066). Bear left along a lane and at the junction turn left along Slad Lane. After 1500m you reach the outskirts of Stroud. After another 1000m, bear right at a T junction past the Cross Keys (SO857051).

● After 50m, just before the Cotswold Theatre, cross and turn left down Wood Street. Just after it curves right past an old school, turn left down an alleyway by the scouting centre, and turn right along Middle Street – one of the most historic parts of Stroud – at the bottom. Carry on as it curves into Nelson Street at the end, cross the zebra crossing by the roundabout and carry on along High Street, turning left along King Street at the end to return to the station.

Pit stop: The Woolpack at Slad is open all day, and serves lunch from 12–3pm daily, thewoolpackslad.com