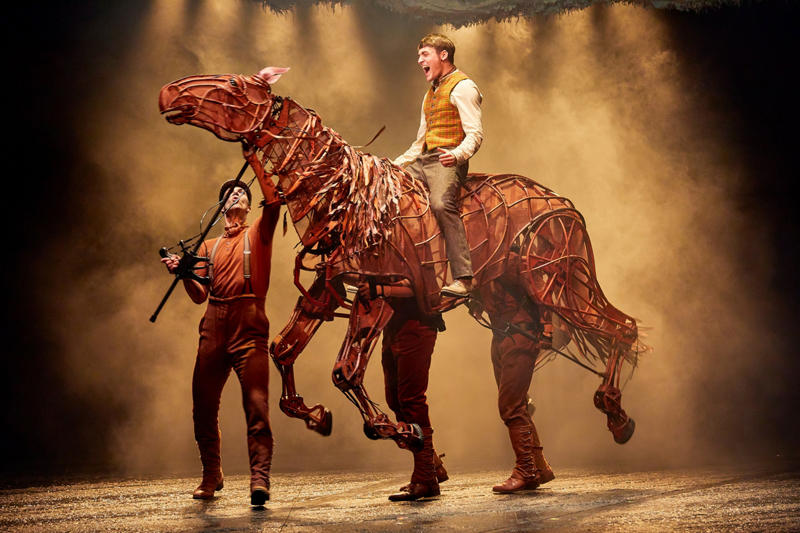 The stage production of War Horse has been watched by more than seven million people worldwide, and has had eight record-breaking years in London’s West End.

Based on Michael Morpurgo’s incredibly moving tale of young Albert and his horse Joey’s extraordinary experiences of the First World War, War Horse is now embarking on a national tour and is coming to Bristol Hippodrome from 18 October – 11 November.

Here actor Thomas Dennis, who plays Albert, discusses what it’s been like to be part of this imaginative production of War Horse . . .

Can you tell me a little about your character and the journey he embarks on in War Horse?

At the beginning of the play, Albert is only 14 years old and works full time on his parents farm. He is very isolated and doesn’t have any friends. That is, until his father spends the mortgage money on a young foal they can’t afford. Albert is burdened with the responsibility of looking after the horse (who he names Joey).

Joey becomes his best and only friend and Albert’s journey throughout the play is a constant battle to be with Joey. Along with his father’s desire to sell the horse, the Great War forces them apart and Albert makes a promise that he will find Joey. The most amazing thing about this character is his undying hope and belief that Joey is alive and that he will find him and they will be “together forever”.

How have you been preparing for your role as Albert?

Albert is definitely one of the biggest challenges I’ve had to face so far as an actor, alongside Christopher in the Curious Incident of the Dog in the Night-Time. The first stages of preparation involved a lot of research. Fortunately, I ride horses in my spare time (in fact, one of my sports of choice is Jousting), so I feel like I can bring that experience and knowledge to the character and the show.

I embarked on a research trip across northern France and the Western Front, following in the footsteps of Joey and Albert in the play. I believe this show to be a commemoration of all the men, women and horses that gave their lives in the Great War, so to see the landscapes and read the names on the gravestones allowed me to connect deeply to the subject matter of the piece.

During my travels, I was able to pinpoint the regiment Albert would have fought for alongside his Devon comrades. There is a small hidden cemetery just outside the village of Mametz, in the Somme Valley, where the casualties of the Devonshire Regiment were buried after the first day of the battle of the Somme. The men are buried together in what was the front line trench that they left from that very same morning on 1st July 1916.

Lastly, it took me a solid 10 weeks of practicing every day to finally learn how to owl whistle, which is essential to the role of Albert!

What has it been like to work with the incredible puppets and the production team?

It is such a blessing to work with the puppets on this show, from the horses to the goose. They bring our world of animals and warfare to life and without them the show would not be where it is today. I must admit, that since the first day I met Joey, I have never once, not believed him to be a horse.

I am always aware of the puppeteers for health and safety reasons, however for me they just become Joey and I forget they are even there. Our puppeteers on this show are so incredible. The detail of their work never ceases to amaze me and there is nothing more pleasurable for an actor than to work with puppets that respond as freely as animals do. How did horses play a part in the First World War?

The Great War marked a huge change in the relationship between horses and men. It marked the end of the cavalry (on the Western Front) as trench warfare made the use of mobile cavalry units obsolete. As we depict in this show, the first cavalry charges of the war against machine guns were disastrous for the men riding and the horses.

Horses never lost their significance though, as their role changed from a fighting role to a transportation role. It was horse power that supplied the men on the front lines with supplies and ammunition. Although historians cannot specify the number of horse casualties in the war, it is believed that nearly as many horses died as men did.

What is the transition like for Albert, moving from Devon to the trenches on the front line?

The shift for Albert from being in Devon to the front lines is massive. For a boy who has never left Devon to suddenly find himself in the hell of the Western Front is exciting to play and every experience he has is new and even more traumatising than the first.

Although, interestingly enough, the young men who worked on farms and out in the countryside were, it could be argued, more adept at adapting to life in the trenches as they were not unused to the hard labouring conditions of farm work.

War Horse has won numerous awards and has had eight record-breaking years on the West End. Why do you think the story resonates with audiences so much?

I believe it resonates so well with audiences because it explores a topic that has affected every family in Britain in some way and spreads across the entire world. At the heart of the story is a simple relationship of love between a man and his horse and their desire to be reunited. I believe stories of love between people and animals can always be related to by audiences all over the world.

Have you felt that this production is even more poignant with it currently being the centenary of the First World War?

The centenary of the First World War definitely makes this show even more poignant as the level of sacrifice is very much at the forefront of people’s minds. I am honoured to be able to tell this story at such an important time. I am passionate about history and I believe this to be a once in lifetime opportunity. Performing this show during the First World War centenary will be an experience I never forget. Are you looking forward to bringing the story of Albert and Joey to different audiences across the country on the UK tour?

I have never toured the UK before, but I don’t think there is a better way to visit all four corners of the country than to be accompanied by such an awesome show. I hope that through touring this production, we can share our story with audiences who might not normally be able to have access to this type of theatre. My focus is to make sure that all the horse lovers around the country can watch and believe the relationship I have with Joey.

How has playing the part of Albert differed from your other parts on stage, such as with The Curious Incident of the Dog in the Night-Time and Peter Pan?

I consider Albert to be another step forward in my career in terms of difficulty. The main difference between Albert and Christopher, who I played in The Curious Incident of the Dog in the Night-Time, is the focus on the physicality. In Curious, I had to tackle front flips, back flips and walking on walls whereas I feel I have to explore levels of trauma with Albert’s character much more. Everything he experiences builds up to the last scene of the show. Whereas Christopher, as a character, is very skilled at compartmentalising all of his emotions and suppressing them.

However, the physicality of the shows I have done in the past, including Peter Pan where I got to fly, have helped me with Albert as I have one moment in the show where I have to jump onto the horse. Probably the most terrifying, yet most exciting part of the show for me.

Do you have a favourite character that you have played on stage during your career so far, and if so, then why this character?

I have loved every character I have played in my career and feel very grateful for the opportunities that have been given to me. At the moment, I have a really special connection with Albert as I get to live his life every evening. I have personally had to say goodbye to my dog who passed away recently and when I connect with Joey, I often see my little boy in Joey’s personality and it just makes my heart sing. I feel like his spirit lives on in this show.

War Horse is on at Bristol Hippodrome from 18 October – 11 November. Visit: atgtickets.com/war-horse/bristol-hippodrome or call: 0844 871 3012 to book tickets.