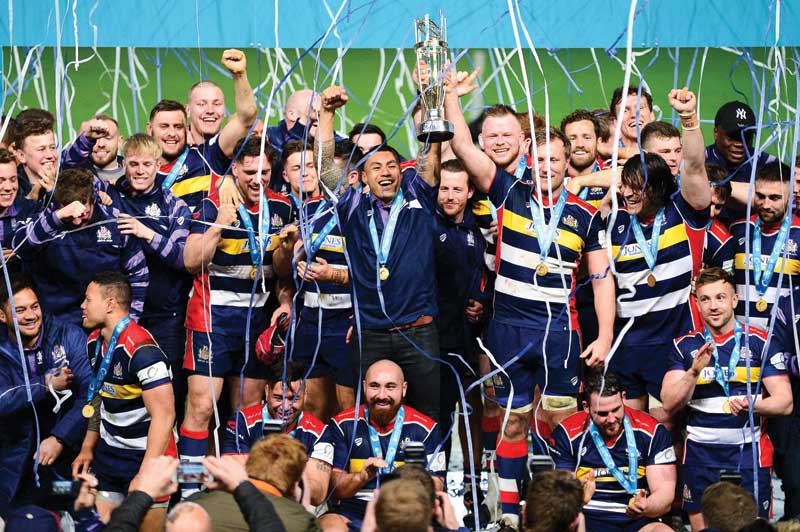 Rugby: We are the champions

Following Bristol Rugby’s domination last season and promotion to the Gallagher Premiership, there are big changes on the horizon. First up, a name change… Introducing Bristol Bears

Words by Will Carpenter

Promotion back to the Premiership and the announcement of a club rebrand ensured an action-packed end to the 2017/18 season for Bristol Rugby – and with top flight and European rugby now back on the menu at Ashton Gate, it’s the beginning of an exciting and bold new era in the city.

Just three days after a 68–10 demolition of Doncaster Knights at Ashton Gate in April – and the lifting of the GKIPA Championship trophy in front of 13,000 supporters – Bristol Rugby announced it would become Bristol Bears from June 2018, with the club’s owner Steve Lansdown describing the decision as: “an exciting and major commitment to ensuring the future of the club.”

“We have to be prepared to break the mould and be relentless in driving the progression of this rugby club,” he said. “In a challenging market, in order to attract investment and new audiences, we must be brave in our vision. The development of the brand expands our appeal to a global audience at a time when the appetite for professional rugby is growing in international markets.

“We believe these changes – alongside the matchday improvements to Ashton Gate and the continued engagement with local schools and our community – are critical to enable long-term success. We recognise that there is a history and tradition associated with all sports clubs and we are conscious and proud of the loyalty, bond and passion so many share for Bristol Rugby.

“We hope that all supporters will embrace the changes and recognise the significant investment taking place – on and off the field – to bring success and a sustainable future for the club.” More than 4,400 supporters have already signed up for season tickets to follow Bristol Bears in the 2018/19 Gallagher Premiership, with three months still to go before the start of the new campaign.

Attracting a new generation of supporters was one of the key objectives behind the Bristol Bears decision, as was tapping into a growing USA and Asian rugby market, as the club’s chief operating officer, Mark Tainton, explains. “Rugby is evolving, and we cannot be left behind,” he said. “We respect the proud heritage and traditions of the club, but also the values of rugby union. “Premiership rugby is fast becoming a global game, with the US and Asia markets rapidly expanding and opening up exciting new opportunities in media and sponsorship.

“We recognise the potential of this new platform and how it can accelerate our ambition to be a Champions Cup winning organisation. With fixtures now taking place outside of the UK and a regular audience of over 1.25million people watching Premiership rugby across the world, we have a significant chance to cement the iconic Bristol Bears vision as one of the leading brands in world rugby.

“This is not a short-term fit, but instead we see this rebrand as breaking the mould and acting as a catalyst in kick-starting our journey to creating success.

“We already have the world-class stadium – the best club rugby arena in the UK. We’re adding one of the best training facilities in the world, which will be completed by 2020.”

Head coach Pat Lam and his hungry squad know all too well that the demands of the Gallagher Premiership far exceed that of the Championship, but with the beginning of a new era comes fresh expectation, and the future appears bright for players and supporters of the Bristol Bears.