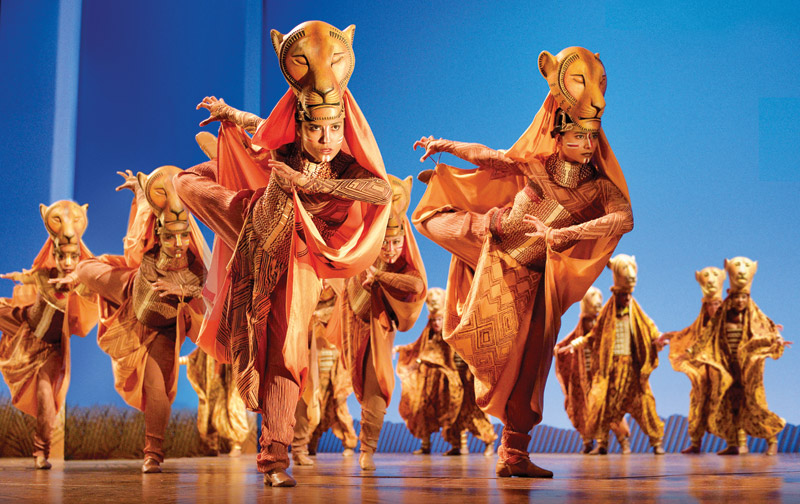 It’s day one of rehearsals at a studio in Bristol that’s filled with beautiful puppetry, masks and costumes for a new UK and Ireland tour of The Lion King, and the brand new cast have just performed their first ever rendition of Circle of Life. “I get all weepy, every time,” says Thomas Schumacher afterwards – and as president and producer of Disney Theatrical Productions, a producer on the 1994 Lion King movie, and an executive producer on the new film version, he’s heard the song more than most.

Schumacher is the impresario of the original Broadway musical. The American, who’s worked for Disney for more than three decades, was the man who got the acclaimed, experimental theatre director Julie Taymor on board to adapt the show. She transformed it from an animated adventure to a theatrical spectacular that feels even more vibrant today, with its inventive, enchanting puppetry and music grounded in the rhythms and voices of South Africa.

It’s the circle of life

It might seem surprising that a figure such as Schumacher would fly over for rehearsals in Bristol for a show that’s been around so long – the West End version celebrates its 20th anniversary this autumn. But every new production or tour of The Lion King (and this tour is the 26th production in the show’s lifetime) gets the full treatment: that’s partly how the show stays feeling fresh and vital, he insists.

You want it to stay alive. It’s not a museum piece,” Schumacher says outside the rehearsal room, already filling up with the bright, bold costumes the musical is famous for. Zazu is hanging out by a grand piano; multi-coloured giraffes loom in hallways.

It takes a village to put on The Lion King, Schumacher insists – and it’s a village which can turn into a family. While many of the cast and crew are new to the show, others are returning for their second, third or fourth time. Few have been involved as long as one unexpected guest however: Lebohang Morake, known as Lebo M; the South African composer, musician and singer who contributed to the original film soundtrack alongside songwriter Elton John and the score’s composer Hans Zimmer. Morake expanded his music to create the original Tony-winning show with Taymor, and even performed in it when it opened on Broadway.

The man behind the music

Having worked on the soundtrack of the new film, Morake had been in London for its premiere. When he heard a new tour was starting rehearsals in Bristol the next day, he also felt he had to be there. “Landing here today for a fresh start, feels very much like the first day 20-something years ago,” he says with an enormous grin. Today, The Lion King is one of the longest running musicals in the UK, and has been seen by over 100 million people on six different continents. What’s the secret to its enduring popularity?

“It was the first movie translated into 32 different languages; it was even translated into Zulu,” begins Schumacher. “Whether you were a kid in Israel, a grandma in South Africa, a college student in Finland, you all saw the same story and it becomes a universal story – because it’s about all of us. It’s about family and community and responsibility and growing up: I think that is just so universal.”

But he adds that it was Taymor, the “genius of the show”, that transformed that fable into a live work that really connects with audiences. “Even though people think of Julie as a visualist, she’s really a storyteller. And the first thing we talked about was how would the story be expanded? She enhanced the physical beauty of the show by not trying to be literal – by being more metaphorical and theatrical.”

Making the magic come to life

You always know you’re watching actors – but through the use of masks and puppetry, you’re also seeing the animals of the Pride Lands spring to life. Whether it’s giraffes played by performers on stilts or a dancer animating half a herd of leaping gazelle puppets, whether it’s a comic actor inside a giant Pumbaa suit or grasslands created through waving headdresses, The Lion King invites the audience to see on two levels at the same time: the fiction, and how it is created. Somehow, knowing how the magic is made only makes it more magical.

For generations of audiences, it has been their introduction to the huge potential of theatre – and the show’s worldwide gross exceeds that of any film, Broadway show or other entertainment title in box office history. But its success was by no means guaranteed.

“I thought it was the worst idea in the world,” Schumacher deadpans, recalling the first time someone told him to make a stage version of the cartoon. “In the early days of Disney Theatrical, the goal was recreating the film on stage,” he says. But the thought of actors prowling around in fluffy lion outfits did not seem promising.

Schumacher’s background, however, was in theatre rather than Hollywood – and in experimental, international work at that. As a young man, he was influenced by seeing Peter Brook’s legendary A Midsummer Night’s Dream, which staged Shakespeare’s magical forest in a stark white cube. At college, he studied different puppetry traditions, including Japanese Bunraku, where several puppeteers manipulate one character. You can see this tradition in the Timon meerkat puppet.

So Schumacher knew there could be another way to adapt The Lion King for stage. “I thought, well, who could do this? Only one person: Julie. I called her, and she didn’t even know what The Lion King was.” But the pair had a shared theatrical language, and Schumacher made it clear that the key to the show’s success was her having the freedom to pursue her own style.

Today, Disney Theatrical shows are never expected to simply recreate a film. “We’re much more stylised now: whether you see Frozen or Aladdin, we make them absolutely theatrical.” And he argues that the knock-on effect of the global success of Disney’s theatrical division also paved the way for the recent rush of live action (or CGI) remakes: the musicals proved that Disney stories can stand being reinterpreted, and that there’s a huge appetite for re-telling them in a whole new way.

Beyond Disney, how influential does he think The Lion King has been on theatre? “I don’t think it has influenced directors as much as it has influenced audiences,” Schumacher muses. “It just tells them everything is possible in the theatre.” That, in turn, emboldens producers to trust there’ll be an audience for more imaginative work. Still, mounting a tour of a show which is so technically demanding, with so much set and costume, isn’t exactly a breeze. “Over the years we’ve changed the way things are built, how they come together, how they pack. We have things now that self-assemble with magnets: rather than having to pack a big bird kite in a huge box, we can pop the wings off,” Schumacher explains.

But audiences for the touring show will experience what those at the Lyceum Theatre in the West End and the Minskoff Theatre on Broadway cheer at every performance: the puppets and costumes may have to be built to withstand travel, but onstage they look the same. “You’ll see the same elephants, the same giraffes; Mufasa will look the same,” says Schumacher. “We just have to reconfigure [the show] because it has to get on and off a truck.”

The make-up of this new Lion King is a little different however – even for a show known for its diverse casting, this is the most international company they’ve ever assembled, with cast, crew and creatives from 17 different countries around the world. From its inception, it’s been mandatory for any production to feature South African performers. “Julie was adamant,” recalls Schumacher. “It’s absolutely intentional to have South Africans in the show: you hear that sound and beautiful singing style that is part of South African culture.” But to begin a new tour with such a diverse, globe-spanning company is a real joy. “I think it speaks to what The Lion King is all about,” he says. “It is just so universal.”

Next
Travel: All the joy of Illinois
Start typing to see results or hit ESC to close
bristol gender film history tv
See all results