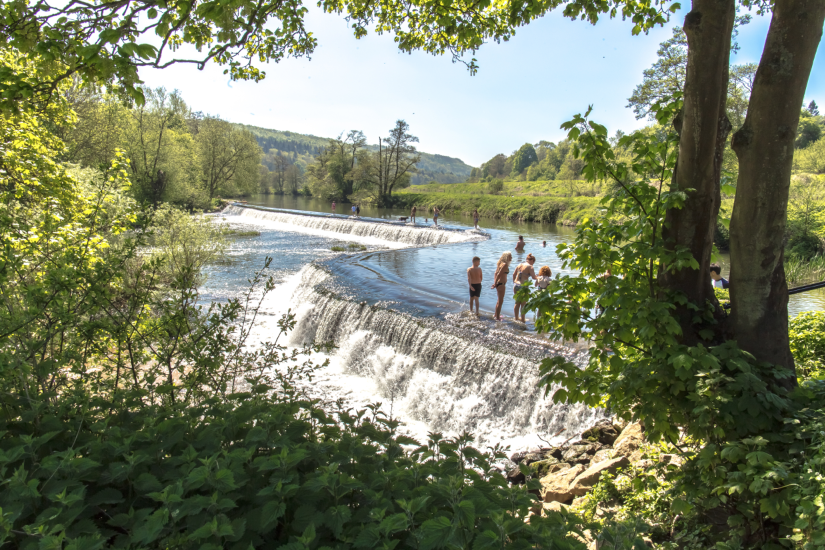 The man who recently bought this beloved idyll, a 40-minute drive from Bristol, talks about its recent regeneration and efforts to maintain its beauty

There is a private island not far from Bristol and Bath that has become a haven for local river-swimming, field-loving outdoors types. But it wasn’t always like this. Just last year the site was almost closed off to the public and was becoming a much less pleasant place to go, but its owner has gone to huge lengths to ensure that the Warleigh Weir Island remains a destination of choice for hot summer days.

So what was going wrong with it? “Since widespread social media coverage of the island, Warleigh Weir has gone from being a local secret to being featured in most wild swimming guides and national press,” says owner Johnny Palmer.

The island was having an enormous issue with rubbish being left by swimmers and picnickers and, as the popularity of the site grew, the problem became more serious and the site began to attract anti-social behaviour. Many of the local residents and wild swimmers were infuriated as the place they had used and loved for years was being destroyed.

“I had been coming to the island for many years with family and friends,” continues Johnny. “It broke my heart to see such a beautiful and magical place become overrun with rubbish and bad vibes – I felt compelled to do something about it. While feeling frustrated at the situation I also thought about the benefits for people interacting with nature – it makes people think about how they treat their environment and how they live their lives. I realised there was an opportunity to set up a conservation project that could both protect the island and also promote positive sustainable change in our community.”

Johnny then went on to buy the island and set up the Warleigh Weir Project which was swiftly featured on local and national press as an exemplar of localised sustainable action. Campaigning and community leadership resulted in the local council investing in rubbish bins installed on the site and an army of ‘guardians’ getting involved with education, litter-picking and site improvements.

But this journey wasn’t smooth and there was some controversy. “I realised early on that we had a deep-rooted cultural issue with the island as some people thought it was okay to use it, leave rubbish and damage the land. In order to fix this I knew we needed to grab attention to attract and work with people who were prepared to get involved.”

Johnny publicly announced his ownership and declared that the site would be closed to the public if the issue did not get resolved. “I’m not afraid of a bit of controversy, in fact I quite enjoy it!”

Fortunately, this approach did the trick – the news was widely shared and there was backlash from the island users. “It started a really good conversation with the right people and allowed us to form a group of highly passionate, vocal, hands-on people who now work hard to maintain the island.” The Warleigh Weir Project Guardians are now over 300 strong.

Since the purchasing of the land there have been many changes to the island including improved river steps, woodland and willow benders being planted and signage installed.

So what’s next for the Warleigh Island? The whole project is about maintaining sustainable use of the countryside in the way it has been for decades.

“I hope that we can put some more basic amenities in like bike racks, a bike servicing point and improved river access. But other than that we want to keep it as it is and use it as a way of encouraging people to think about their interaction with nature and to live their lives more sustainably.”