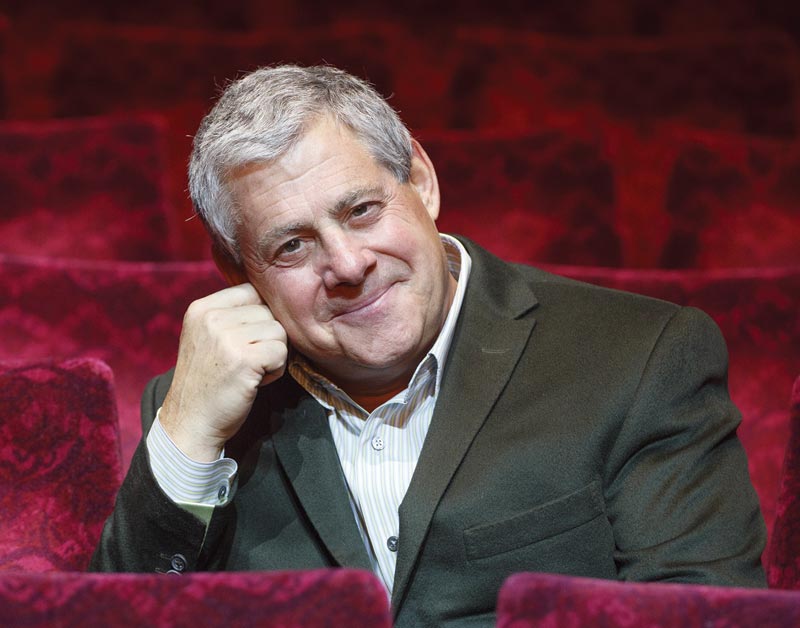 Less than 24 hours after sweeping the board with seven gongs at the Olivier Awards for critically acclaimed hip-hop musical Hamilton, Sir Cameron Mackintosh is enthusing to me about the UK and Ireland tour of another of his world-renowned productions, Miss Saigon. For someone who has just equalled Matilda’s record from 2012 for a musical winning the most Oliviers, I am surprised to find that Mackintosh doesn’t have any signs of a sore head from too much celebrating the night before.

Prior to our interview, I decide that, out of anyone, he certainly deserves to be feeling a little worse for wear after the incredible success he has had in co-producing this ground-breaking musical about US founding father Alexander Hamilton, which only opened in the UK late last year and has quickly taken audiences and critics by storm.

But Mackintosh, 71, tells me he just had a few drinks after the awards ceremony before heading home. And listening to him reel off the sheer number of productions he has opened in the last five weeks – including Les Misérables and Mary Poppins – as well as overseeing the 30-40 shows he has on or that are in preparation, it sounds as though he probably can’t risk having a day in bed, nursing a hangover. 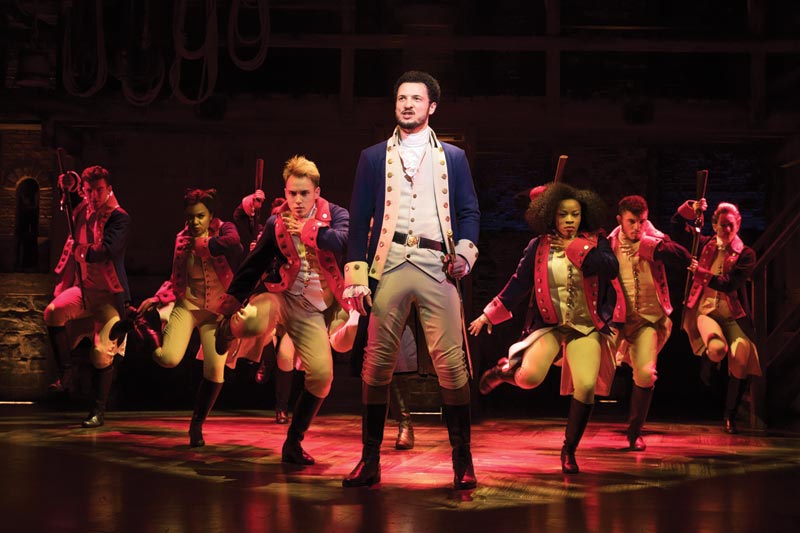 When he isn’t scooping up awards or opening productions of his legendary musicals in the West End or on Broadway, he is ardently promoting his shows on tour around the world. One such production is the critically-acclaimed Miss Saigon, which opens at Bristol Hippodrome this month for a six-week run.

Coming straight to the UK from an extraordinarily successful run on Broadway, this production is more souped-up than any musical revival Mackintosh has done before. “This is the biggest scaled show I’ve ever done – it’s even bigger than Les Mis,” he says.

Miss Saigon follows the life of 17-year-old Kim during the last days of the Vietnam War. She is forced to work in a seedy bar in Saigon, run by a man with a notorious reputation, known as the Engineer. Kim falls in love with an American GI, Chris, but they are torn apart following the fall of Saigon and evacuation of US troops in 1975. Kim then embarks on an epic three-year search for Chris, who has no idea that he has fathered a son.

As with any large-scale production, Mackintosh and his team began the planning for this revival years ago. “You have to plan these things very far in advance. We have an incredible multi-race cast, which isn’t easy to put together as a lot of them are based internationally,” he says.

“We went back to the Philippines around 15 months ago to find a completely new cast. Red Concepción is terrific – he’s unlike any Engineer we’ve ever had before.

“This production has had phenomenal reviews across the UK already, and we’re really looking forward to bringing it to Bristol.”

Based on Puccini’s opera Madame Butterfly, Mackintosh’s Miss Saigon first premiered in the West End in 1989 and ran for 10 years, while the Broadway version – opened in 1991 – broke records for what were the largest advance ticket sales for a theatrical production at the time. 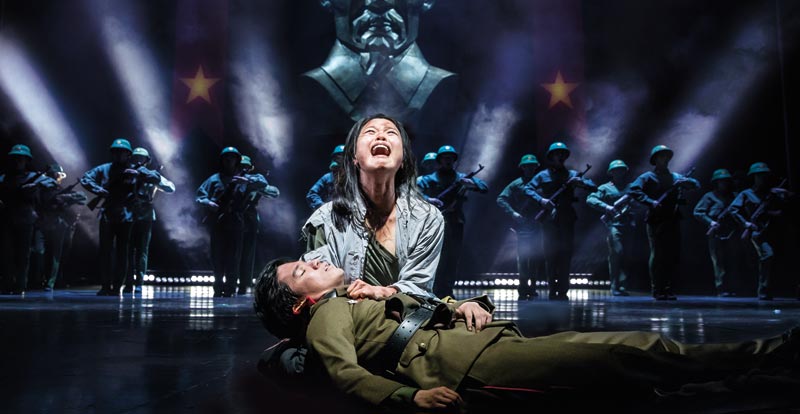 Sooha Kim as Kim and Gerald Santos as Thuy in the UK and Ireland tour of Miss Saigon. Image by Johan Persson

Since then, it has had unprecedented success with multiple revivals and several openings around the world. Why does Miss Saigon continue to draw in audiences by the thousands, across countries and generations? “There is such a sweeping and epic grasp to the story. It’s all about two cultures coming together and understanding one another,” explains Mackintosh.

“Sadly because of the way the world is these days, the story is more relevant now than ever before. As it is based during the Vietnam War, we are looking at the story from a historic perspective. But it could be based in Afghanistan, Iraq or Syria today. It is about the tragedy of people in war-torn countries, being separated. And it is about a mother’s sacrifice. It has a universal theme.

“It is based on historic events such as migrants travelling across seas and storming the walls to the American embassy, which are unfortunately things we read about everyday now; it is terribly poignant.”

Having worked in theatre for more than 50 years, and with a list of productions longer than anyone else in the business, Mackintosh certainly knows what is needed for a musical to take off.

“The root to a successful musical is the story,” he says. “With any production I take on, the story has to grab me first. Just like with Hamilton, it is the story that draws you in. It holds your interest, and has such a brilliant cast in London. It is a testament to all of them; how they are able to use storytelling and grasp the lyrics to tell their stories.

“What playwright Lin-Manuel Miranda is doing is what myself and Andrew Lloyd Webber were once doing many years ago with our first big musicals. We were making something for the modern-day audience. And in Hamilton so much understanding of what the characters are like and their life events comes from the use of rap, which is a unique and contemporary element of the story.”

“…Miss Saigon is about the tragedy of people in war-torn countries, being separated. And it is about a mother’s sacrifice. It has a universal theme…”

Born in Enfield, London, in 1946, Mackintosh recalls the exact moment he knew he wanted to produce musicals. “It all started with a writer from Bristol,” he remembers. “Julian Slade from the Bristol Old Vic wrote a musical as an end-of-year romp in the 1950s called Salad Days. I saw it when I was just seven years old. I loved it so much that when my aunt asked me what I wanted to do to celebrate my eighth birthday, I asked to go see Salad Days again.

“So she took me to go see it in London and I was invited backstage by Julian, who showed me how the incredible piano prop worked and how the UFO could swoop in on stage. From then I knew I wanted to produce theatre.”

While attending Prior Park College in Bath during his teens, Mackintosh spent his free time going to new shows at Bristol Hippodrome and Theatre Royal Bath. After finishing school, he landed his first job as a stagehand at the Theatre Royal in Drury Lane.

He then got his next few jobs by running around the capital, persuading theatre productions to take him on.

“I told myself that I wanted to be a producer by 25, but somehow I made it by 20 by making myself indispensable to others,” he says. But it hasn’t always been plain sailing. After going on stage tours with the likes of Camelot and Oliver! he launched his first show, Anything Goes, as a producer in 1969. It turned out to be a flop and closed after just two weeks.

But this didn’t hamper his ambition. Having been inspired by his work when he was a boy, Mackintosh teamed up with Julian Slade in 1972 for an adaption of Trelawny, which premiered at Bristol Old Vic before transferring to the West End for a year – it was this that helped put Mackintosh on the theatrical map.

“…In Hamilton so much understanding of what the characters are like and their life events comes from the use of rap, which is a unique and contemporary element of the story…”

After successful productions of Side by Side by Sondheim, My Fair Lady and Oklahoma! in the 1970s, Mackintosh joined forces with Andrew Lloyd Webber, who was already a big name in the theatre business by this time, to produce Cats in 1981, which would go on to be one of the longest-running musicals in the UK and US.

His reputation catapulted in the 1980s and ’90s, making musicals such as Miss Saigon, Phantom of the Opera and Les Misérables into international brands, racking up countless awards and records for ticket sales in the process.

Nonetheless, as Mackintosh experienced early on in his career, putting a new production out there is like stepping into the unknown. “When I first produced Les Mis, I thought it was only going to make it on the stage for two or three years. But it has had phenomenal success and we’re going to be launching a new UK tour of it at the end of this year.”

Les Misérables in the West End. Image by Johan Persson

With a net worth of £1.18billion according to the 2017 Sunday Times Rich List, Mackintosh has come a long way since his stagehand days. In 1996 he was knighted for his services to British theatre, and two years later a gala concert was held in his honour, celebrating 30 years of his career in entertainment, which was attended by the Queen and the Duke of Edinburgh. Mackintosh was also bestowed with the honour of being the first British producer to be installed into the Broadway Theatre Hall of Fame in 2014.

As well as creating the biggest musicals in the business, Mackintosh also owns eight theatres in the West End and has overseen the extensive refurbishment of each one. He tells me that his fascination with architecture and refurbishment of old buildings stems from his time at school. “Prior Park College is the most impressive Palladian example of architecture that you could wish for,” he declares.

“The Victoria Palace Theatre in London [the latest addition to Mackintosh’s theatre portfolio] where Hamilton is based is the most beautiful theatre you will ever see, and the inspiration behind the refurbishment of it comes from my experiences of living in Bath.”

And his love for architecture continues at home. While not in London or launching productions around the world, Mackintosh lives at the medieval Grade-I listed Stavordale Priory in Charlton Musgrove, Somerset, with his partner Michael Le Poer Trench, a theatre photographer. A world away from the glitz of the stage, the couple run a dairy farm with around 600 cows, and also own 14,000 acres in the Scottish Highlands. As well as juggling all these productions while running theatre licensing agency Music Theatre International and keeping an eye on his farm’s cattle, Mackintosh coyly tells me that he’s currently working on something special, but that we’ll have to wait a while to find out more. “This is something quite in advance,” he says. Whatever it may be, you can expect it to have the best creative minds in the business behind it.

From the fall of Saigon to revolutionary Paris; the American founding fathers to dancing alley cats, there doesn’t seem to be a topic that Mackintosh can’t take on. His musical empire continues to dominate the theatre scene, and it doesn’t look like our fascination with his productions is going away anytime soon.

• Miss Saigon is on at Bristol Hippodrome from 16 May – 23 June; atgtickets.com/venues/bristol-hippodrome

Next
Review: A View from the Bridge at Tobacco Factory Theatres Bristol
Start typing to see results or hit ESC to close
bristol gender film tv history
See all results