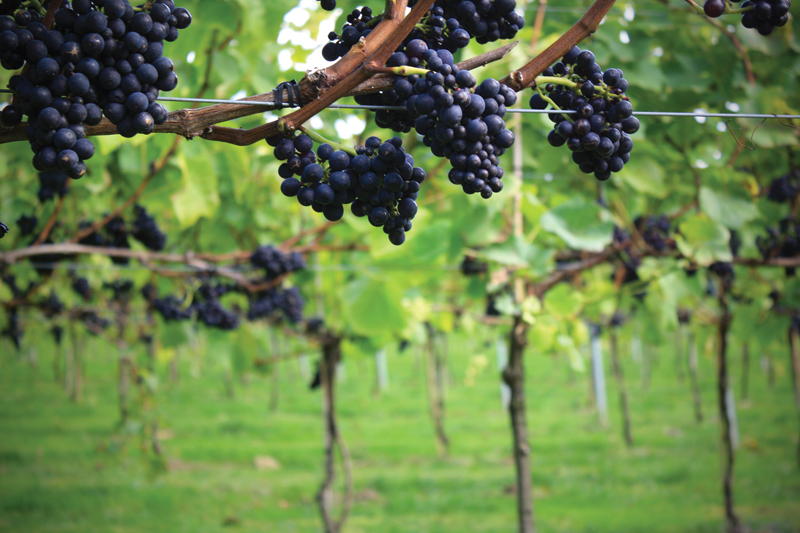 England may not be the first place we think of when it comes to wine production says Elly West, but tucked away in Redhill, south of Bristol, is a thriving vineyard producing around 30,000 bottles in a good year. And it’s not alone…

There are an estimated 500 vineyards in England and Wales, mostly (but not all) in the warmer southern regions, and with the current trend towards buying local, not to mention longer and hotter summers, the popularity of home-grown wines is only set to increase.

I visited Sandy Luck, managing director at the Aldwick Estate, to find out more. At the time of my visit, I’d not long returned from a trip to South Africa – a country much better known for its wineries – so I wasn’t quite sure what to expect here in BS40. But seeing row upon row of vines, neatly tended and trained to low wires, hanging with grapes nearly ready to be harvested, was nothing short of spectacular, especially given the location.

The first vines were planted in 2008 by Sandy’s brother Chris Watts, who sadly died in a helicopter crash in 2011. Sandy grew up on the estate and is the fifth generation of her family to run the 300-acre working farm, which has seen necessary diversification over the years through dairy and pig farming, leading to its current incarnation as a wedding venue and vineyard. But despite the vineyard’s youth, it’s now the largest in Somerset with 11 acres of carefully managed grapes nestled beneath the slopes of the Mendips.

Following her brother’s accident, and with no background in wine growing, Sandy was determined to make it a success, and with the help of family and friends, this initially daunting side of the business has gone from strength to strength, picking up numerous prestigious and international awards for the quality of the wines produced.

“It’s not easy,” laughs Sandy. “To anyone who has a romantic idea about growing a few acres of vines, I say: good luck with that!”
One of the most obvious challenges is dealing with the vagaries of British weather. There’s a reason why the commercial market is dominated by wines from warmer climes. Grapes like long, hot summers. Most English wines are sparkling as southern English counties share similar climate characteristics with the Champagne region of France. However, the Aldwick Estate, besides producing two sparkling varieties, also has two reds, a rosé and two whites in its stable. Reds require more sugar in the grape, which means a longer growing season, while white wines are more about the acidity. And the weather does have a massive impact on the output for the year.

“We had a really good harvest for 2017,” Sandy explains. “The vines had matured, compost was in the ground. It was a combination of factors all coming together. Then 2018 was such a hot summer and the harvest increased again because the growing conditions were so great.”

The soil is another issue in this region where, as we who garden well know, heavy clay is predominant. Grapes like chalk and limestone. At the Aldwick Estate, the soil is clay over limestone but has been vastly improved with homemade compost using chicken manure from a local farm, along with other organic matter. No artificial fertilisers are used. “We leave the manure to settle for about eight months, then add it to the ground once every three years,” Sandy says. “It has increased the worms and improved the soil beyond recognition.”

The vineyards are surrounded by a low electric fence to keep out badgers, which apparently love eating grapes and can decimate a crop, but the wires can’t stop birds, including pheasants, dropping in for snacks. “They even nest in the vines,” says Sandy. But the vines aren’t netted as the losses aren’t seen as significant compared to the benefit of having lots of birds in the area. “We’re very proud of our bird population,” Sandy adds, as we notice a buzzard slowly circling overhead. The aim is to keep things as organic as possible, avoiding spraying and trying to promote a balanced ecosystem. Bat boxes have been put up to help deal with moths. Other challenges include wasps, mildew, diseases such as botrytis; the list goes on.

September and October is harvest time for the grapes, which were hanging in thick, extremely healthy-looking bunches when I visited at the end of August. They looked ready to me, but Sandy picked one and it took just a quick look to know it wasn’t yet ripe. “We do a taste test to see when they’re nearly ready, and then we check the sugar levels and acidity levels before we start picking. I’m not even going to taste this one.” She pulls a face.

All the grapes are hand-picked by volunteers over the course of around six weeks, and selected for quality as they go, with only the best making it to the press. Grape varieties include Pinot noir, Bacchus, Seyval Blanc, and hybrids Regent and Solaris, with nearly 9,000 vines in total and Aldwick wines made exclusively from the grapes grown on the estate.
Bottles are available to buy directly from Aldwick, and can also be found on the wine list in selected local restaurants including the Pig at Bath, Chew Valley’s Pony and Trap, the Yeo Valley Canteen and the Glassboat in Bristol. There are also regular wine tasting tours between April and October; visit aldwickestate.co.uk to find out more.