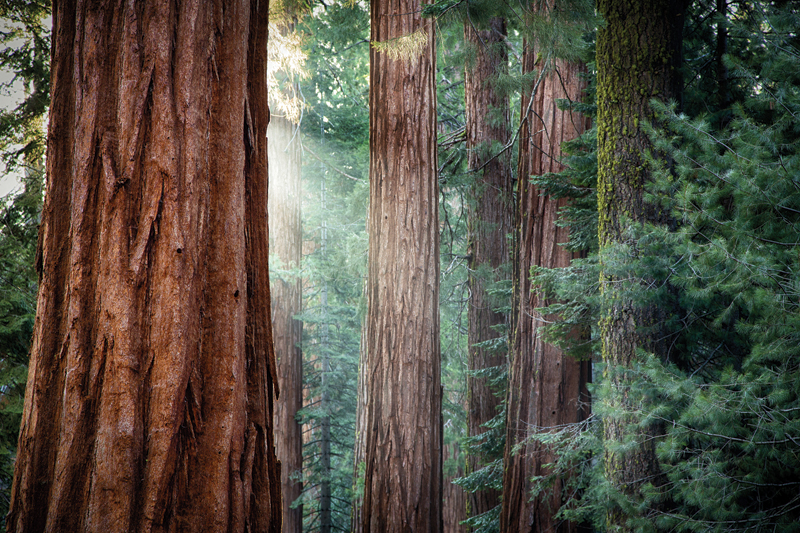 Wild Bristol: sequoias in the city

Are you getting a tree this year and, if so, what size? A six-footer? Bigger? How about a simple, stirring stroll beneath the canopy of Bristol’s 100-foot sequoias instead? Pete Dommett goes in search of the city’s enormous evergreens

The giant sequoia is a skyscraper of a tree. Regularly reaching the same height as a 20-storey tower block and the width of two lanes of traffic, it’s considered to be the largest living thing on the planet. The biggest of these botanical beasts are found on the slopes of California’s Sierra Nevada, but some seriously impressive specimens can be seen here in Bristol.

Your own arboretum, full of exotic plants from far-flung corners of the colonies, was the ultimate status symbol in Victorian Britain. The absolute must-have tree was a Wellingtonia – the first name given to the sequoia on Christmas Eve 1853, by English scientist John Lindley, in honour of the Duke of Wellington who had died the year before. It was later changed to Sequioadendron giganteum, but the species is still often referred to by its former label in this country.

Sequoia seeds and saplings were shipped in from the United States from the mid-19th century onwards, including onboard the SS Great Britain. Fittingly, the 130th anniversary of her launch was celebrated in 1973 by the planting of a giant sequoia at Brandon Hill. Nearly 50 years on, the tree is still very much in its infancy (sequoias can live for several thousand years) and yet to attain giant proportions. But it’s growing at such a rapid rate (three times faster than most trees) that it will likely be higher than Cabot Tower in another half century.

More mature sequoias can be seen in other parks and estates around the city. Most of these were planted between 150 and 160 years ago and many are now over 30 metres tall. There’s a whopper standing guard over the Lord Mayor’s Mansion House in Clifton; a monster on the Blaise Estate that measures more than seven metres in circumference; and a three-in-one tree at Greville Smyth Park, near Ashton Gate. The last of these has a trunk that unusually divides into a trio of separate stems.

Just outside the Bristol boundary, the appropriately named ‘Big Tree Grove’ at Ashton Hill Plantation is worth a visit. Around two dozen sequoias are laid out like they’d be in their native North America; strolling beneath the canopy of these mammoth trees is a stirring experience.

All the city’s sequoias share certain key characteristics. From a distance, their general shape is that of an upturned toilet brush. Close up, the dark green needles are narrow, cord-like and, when crushed, smell strongly of aniseed. Most famously, the trunks of sequoias are clad in a thick layer of spongy, ginger bark. This is so cushiony that you can, according to my old Collins tree guide, “punch it with impunity” (although why you’d want to do this, I’m not sure).

The treecreeper – an elusive woodland bird barely bigger than a wren – has taken advantage of the sequoia’s impressible skin. It uses its bill and clawed feet to carve out egg-shaped hollows on the trunk’s surface to shelter in on cold, winter nights. In the UK, these cavities have been found solely on introduced sequoias, presumably because they’re the only trees with bark soft enough to sculpt.

This Christmas, take the family on a woodland walk and find yourselves the biggest tree you can. Mind you, putting the fairy on top could be tricky.