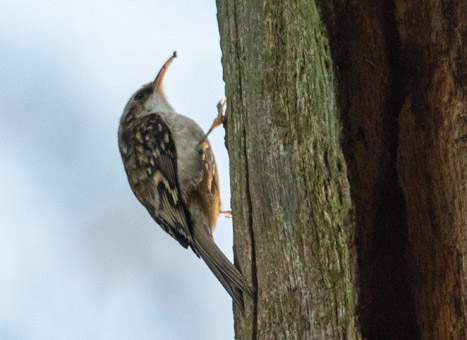 How do you get your fix of wildlife during the dull days of winter? Pete Dommett shares his method

Perhaps you fly off to see spectacular species in the welcome warmth of far-flung places. Maybe you make a pilgrimage down to the Somerset Levels to watch the starlings weave their magical murmurations. Or do you prefer a cosy night in with Sir David: his familiar and reassuringly hushed tones the background to some sumptuous Sunday-night telly? In the depths of a damp and dreary British winter, you’ve got to get your wild kicks where you can.

For me, it often happens during the ordinary doings of the day. While walking the dog the other morning, I saw a treecreeper. Regular readers of this page (I’m presuming there are some) may recall that, in last year’s December issue, I wrote about the city’s giant sequoia trees and their special relationship with this tiny woodland bird. To recap: treecreepers have adapted to roost in this imported species by digging out shallow scrapes in its soft bark. I’ve tried to witness this unique behaviour on several occasions, visiting woods in and around Bristol in the dead of night, but, while I’ve found a few likely-looking hollows (with tell-tale streaks of white guano beneath), I’ve yet to find one occupied by a sleeping ’creeper.

They’re not much easier to see during the day. Treecreepers are a common bird – they’ll be present in parks and patches of woodland all over Bristol – but they’re hard to spot. It was a movement that caught my eye (the dog didn’t see it: she was too busy interrogating squirrels), as something flew from the top of one tree to the bottom of another. Then I watched what appeared to be a feathered mouse scamper up* the trunk in ascending spirals.

It was hard to keep track of the treecreeper as it climbed (or crept, I suppose) higher, tweezering beetles out of the cracks in the bark with its long, thin bill. Drawing on all the shades of the woodland – mottled browns with paler streaks – treecreepers are brilliantly camouflaged. Apart from their silvery-white undersides, that is. One theory suggests that the bird’s brightly contrasting belly reflects extra light into the nooks and crannies that they probe for insects. I don’t know if this is true, but I hope it is.

When it could go no further, the treecreeper fluttered to the base of a nearby birch and started again on its seemingly endless search for sustenance. Winter can be a difficult time for these birds. By opting not to migrate, they’re choosing to tough out the challenges that this season brings. Staying warm is one issue (which is where the sequoias and their insulating bark come in handy); finding enough to eat is another. Treecreepers will sometimes join forces with other small species – blue tits, long-tailed tits, wrens, goldcrests and nuthatches – to form feeding parties that roam the woodlands together. The more eyes there are to look out for food (and sparrowhawks), the better.

My meeting with the treecreeper may have been fleeting, but even the briefest of encounters with the natural world is enough to lift the greyest of February days and a mid-winter mood. Go out and get yourself a wild fix.

*Treecreepers always go up, never down – if you see a bird heading headfirst down a tree, it’s a nuthatch.