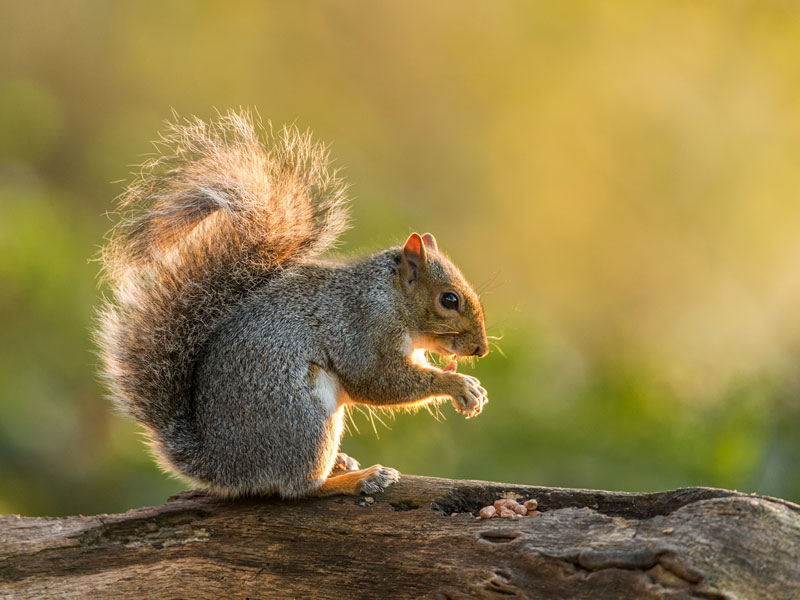 Cute. There, I’ve said it. When it comes to writing about wildlife, the c-word is not something that trips comfortably off my keyboard (I like to think, rather pompously perhaps, that I’m better than that). But, as I sit among the browning leaves in Bristol’s Brandon Hill, surrounded by several friendly, furry creatures like a scene from a Disney film, it’s the first word that springs to mind.

Not everyone feels the same way about grey squirrels. They were introduced from North America in the late 19th and early 20th centuries as fashionably exotic additions to large country estates, but rapidly spread across the nation. As they did, greys wreaked havoc on both forests (by stripping bark from young trees) and populations of native red squirrels (which are outcompeted for food by their Amercian cousins and also highly susceptible to the deadly ‘squirrel pox’ virus that greys transmit but are unaffected by). Their habit of raiding garden bird feeders for food and birds’ nests for eggs has also made grey squirrels public enemy number one.

In areas where red squirrels remain, it’s vital that greys are kept at bay. But, in the vast majority of Britain, controlling the numbers of this well-established species seems somewhat futile. As one of very few mammals that most of us can see easily and often, maybe we can enjoy these adaptable, intelligent and entertaining animals instead.

Autumn is a fascinating time to observe squirrel behaviour. Throughout the season, greys (along with jays) are busy foraging for the abundance of hazelnuts and acorns, but it’s Brandon Hill’s horse chestnut harvest that’s proving irresistible to my bushy-tailed companions today. When a couple of conkers fall from the tree that I’m sitting under, two squirrels immediately come bounding over like a pair of pocket-sized kangaroos. One takes a nut in its paws and nibbles it then and there. The other carries its prize a few feet away and buries it beneath the leaf litter. Like an Alabama farmer preparing for the apocalypse, squirrels stash away supplies to see them through the darker days.

Come the colder months, when sustenance is scarce, greys spend much of their time searching the woodland floor for these secret caches, desperately hoping that they haven’t already been discovered by mice, voles or other squirrels. Zoologists believe that they use a variety of methods to re-find food, including a sound spatial awareness of their territory, a memory for landmarks such as specific trees and an acute sense of smell. However, it’s estimated that squirrels only unearth just over half of their buried bounty.

As autumn advances into winter, the breeding season beckons. Female greys lead loved-up males on frantic courtship chases through the leafless trees. They helter-skelter round trunks and along branches after her – all the time chattering and barking excitedly – before she eventually selects the best suitor to mate with. At Brandon Hill, and other parks in the city, the more confiding nature of urban greys offers the opportunity to witness this aerial game of kiss-chase at close quarters.

So whether you love or loathe them, consider them to be ecological criminals or undeniably adorable, what was once said about American GIs during the Second World War could (with a slight change in wording) be applied to this other visitor from across the pond. Grey squirrels are oversexed, overfed and over here.

• Find out about Brandon Hill’s wildlife at avonwildlifetrust.org.uk