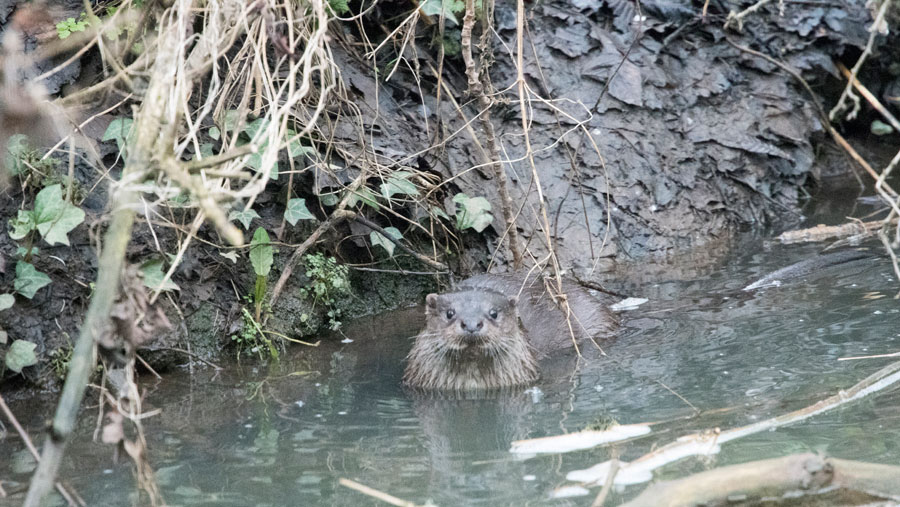 This month, Pete Dommett goes in search of one of the most elusive mammals…

I  waited a long time – and went a long way – to see my first otter. Earlier this year on a family trip to the Isle of Mull, we watched one of these charismatic animals crunching crabs by the ferry terminal, blissfully unbothered by the excited bunch of onlookers. It was a welcome tick on my wildlife bucket-list, but left me desperate to see more. Back at home, I phoned a naturalist I know to ask her about the best place to find otters locally. “Right here,” she told me emphatically. “Bristol’s absolutely dripping in them!”

A quick Google search for ‘otters in Bristol’ proved her right. Sightings have dramatically increased across the city in recent years.  Otters have been photographed hunting among the houseboats in the harbour and a video of one swimming in the Eastville Park lake was taken and tweeted by Avon & Somerset Police in January.

Not long ago, such a thing would have been unthinkable. As for many other species, we did our best to do away with otters in this country. By the 1970s, years of persecution, poisoning through pesticide run-off into rivers and habitat destruction had left them on the edge of extinction. But, after hunting was finally banned and our waterways were gradually cleaned up, otters returned and, in 2011, the Environment Agency announced that they were again present in every English county. Since then, they’ve been increasingly turning up in urban areas, and now, with otters doing better than they have done for decades, the chances of seeing one have never been better.

So I eagerly arrange to go out with the Greater Bristol Otter Group. Set up five years ago, this band of volunteer otterphiles conducts monthly surveys on the city’s waterways (of which there are over 100 miles), recording evidence of otter presence. I meet up with members, Sian, Cher and Hannah, under the M32 at the entrance to Eastville Park, and as we follow the shady, and surprisingly tranquil, footpath alongside the River Frome, I ask Sian how many otters there are in Bristol. “It’s difficult to know exactly,” she admits. “But signs of them have been seen on all the city’s main rivers – including the Avon, the Trym and here on the Frome – and on lots of the smaller streams and brooks too.”

These signs, particularly paw prints, are difficult to detect today: recent rain means the river’s running high and covering the muddy banks. We pause at Colston Weir, where otters have been previously observed, but are treated to wonderful views of other urban wildlife instead: a kingfisher is perched on a partially submerged log, as oblivious to the passing joggers as they are to it.

Then, further upstream, Hannah spots something on the exposed roots of a tree overhanging the river – it’s a blob of otter spraint.  These tarry, black droppings are often deposited in prominent places by the waterside and act like a social media status update, telling other otters important information about the animal that produced it; such as its age, sex and whether it’s looking for a mate. Excitingly, it tells us that an otter has visited recently. I may have to wait a little while longer before I catch a glimpse of my first Bristol otter, but just knowing these elusive animals are here, secretly living among us, is good enough for now.

Find out more about The Greater Bristol Otter Group at bristolottersurvey.wixsite.com