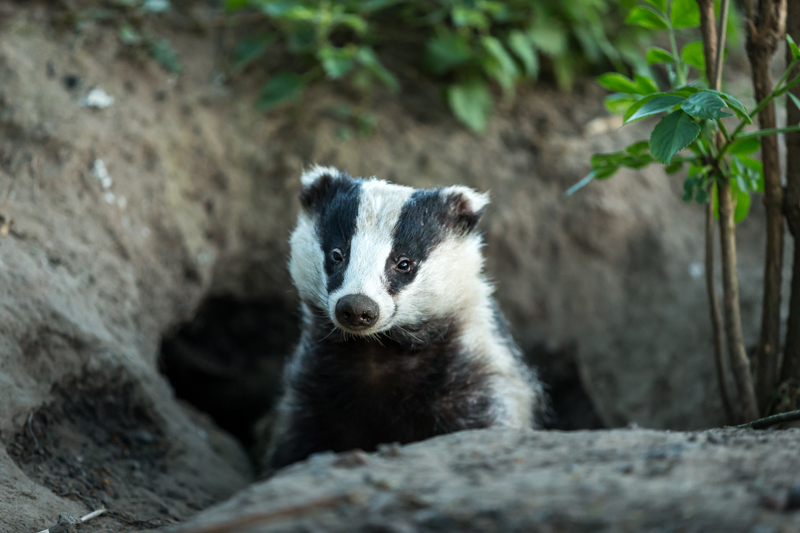 Wild Bristol: The Stars in Stripes

My soft spot for old Brock goes back a long way. A cherished wildlife memory from childhood is going badger-watching with my mum and Aunty Eve. Once or twice a year, on a summer’s evening, we’d climb the hill on the edge of our Somerset village, sit at the fringes of a small copse and wait. Often we’d see nothing, but on other occasions shuffling, snuffling grey shapes eventually emerged from underground and, as the sky dimmed, those familiar, black and white-striped faces appeared to glow.

Now is a good time to go looking for badgers: the light nights making them easier to spot. By August, cubs that were born at the end of winter are starting to find food for themselves (mostly earthworms – eating as many as 200 per night), gradually putting on weight until they are fully grown in autumn. Some then stay with the family group (or clan) while others disperse and establish new territories. Contrary to popular belief, badgers don’t hibernate during winter but are far less active and spend most of their time in their subterranean setts.

There are estimated to be between 250 and 400 thousand badgers in Britain (of which, around 15% are killed on the roads each year). Most of these are in the countryside of course, but the number of animals living in towns and cities is thought to be on the up. It’s not clear whether badgers are actively moving into our neighbourhoods or if increasing urbanisation means that we’ve simply spread into theirs. Whatever the reason, it’s inevitably brought them into conflict with humans.

Urban badgers occupy smaller territories than their country cousins and live in smaller clans, but have still made a strong case for themselves as the UK’s least popular mammal by digging up lawns, raiding allotments and disturbing graves in churchyards. Controversial creatures they may be, but badgers are also heavily protected; it’s illegal to kill or harm them or interfere with their setts.

Love them or loathe them, badgers can be found all over Bristol – wherever the soil is suitable for digging and foraging – but Stoke Bishop is said to be something of a stronghold. For easily accessible animals, take a trip to Avon Wildlife Trust’s Folly Farm site where there’s a dedicated badger-watching platform overlooking an extensive sett.

A couple of years ago, I discovered a sett in the corner of a cemetery just a few minutes’ walk from home. Badgers are extremely wary of people and, while their eyesight is poor, they have an acute sense of smell. However, stand downwind so that your scent is carried away from the animals and you can enjoy some incredibly close encounters. One memorable evening, using an ornate headstone as a hide, my eldest son and I watched a group of six badgers feeding peacefully just a few feet in front of us.

But the kids’ favourite – and frequently re-told – anecdote about our local badgers was when we stopped by the sett one afternoon in the summer holidays. As we peered into the dark burrow, I patiently explained to the children that, as badgers are nocturnal animals, there was no chance we’d see them during the day. At that precise moment though, a snoozing grey form rolled across the entrance hole and mooned us with a big, furry backside.

Featured image: Badgers can be found all over Bristol but Stoke Bishop is said to be a stronghold