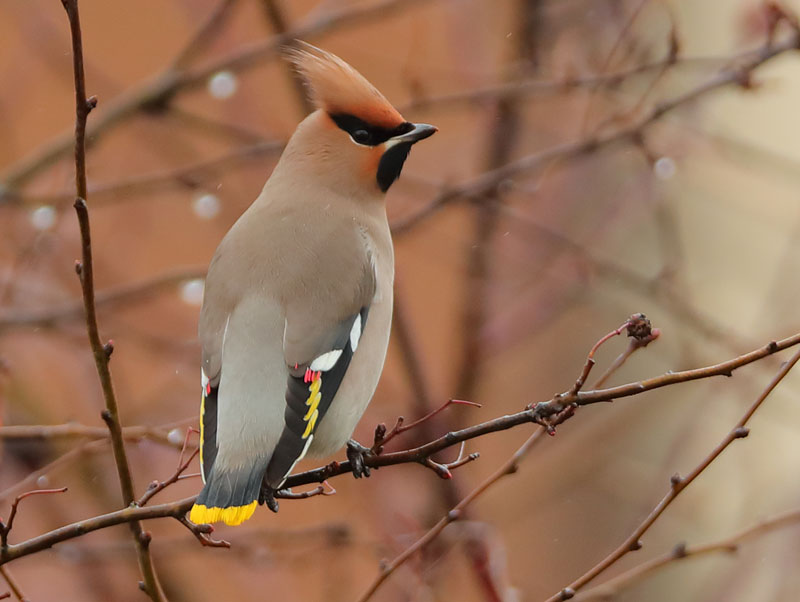 Watch out for rare visitors from the east this month, says Pete Dommett

Waxwings: gorgeous, aren’t they? With their peachy, air-brushed plumage, dark eye-liner and flamboyant quiffs, they are the New Romantics of the bird world. One of those species that – as wildlife writer, Simon Barnes, puts it – can turn anyone into an ‘instant birder’. You might not consider yourself a bona fide birdwatcher, but a chance encounter with one of these exotic-looking beauties will leave you with little choice. So where can you see them? Well, Tesco is a good place to start. Let me explain…

Waxwings only come to Britain in the winter (and not even every winter at that). They breed in northern Scandinavia and Siberian Russia, but when stocks of the berries that they love to eat in the colder months run out, they visit us. The first arrivals are usually seen on the east coast, from Scotland to East Anglia, but then, as their food supplies are exhausted and more birds arrive from the continent, they gradually spread across the country. Only in the worst (or best, if you’re a bird-lover) of winters do they come as far west as Bristol. But when they do, the best place to find them is at the supermarket.

Supermarket car parks are a well-known, favourite hang-out for waxwings. They’re often planted with berry-bearing bushes and trees, like cotoneaster, hawthorn and mountain ash, which prove irresistible to these hungry birds. I’ve seen waxwings at Morrisons in Weston and posh waxwings at Waitrose in Henleaze. At the end of January last year, the Tesco Extra store in Bradley Stoke had a special offer on waxwings: ‘See One Get 14 Free’. A flock of 15 birds based themselves near the car wash for over a month, drawing a daily crowd of birdwatchers, photographers and bemused shoppers as they raided the rowans and called to each other constantly with their high-pitched, tinkling trills.

Apparently, a waxwing can eat two or three times its own body weight in berries every day (that’s 800 to 1,000 individual fruits). And – though I’ve never seen it myself – they sometimes gobble up those that have fermented in the frost, intoxicating themselves in the process and becoming temporarily incapable of flight. Ornithologists believe that these birds have evolved highly efficient livers that enable them to recover quickly from these boozy binges. Somewhere, a scientist is surely working on a waxwing-inspired hangover cure. 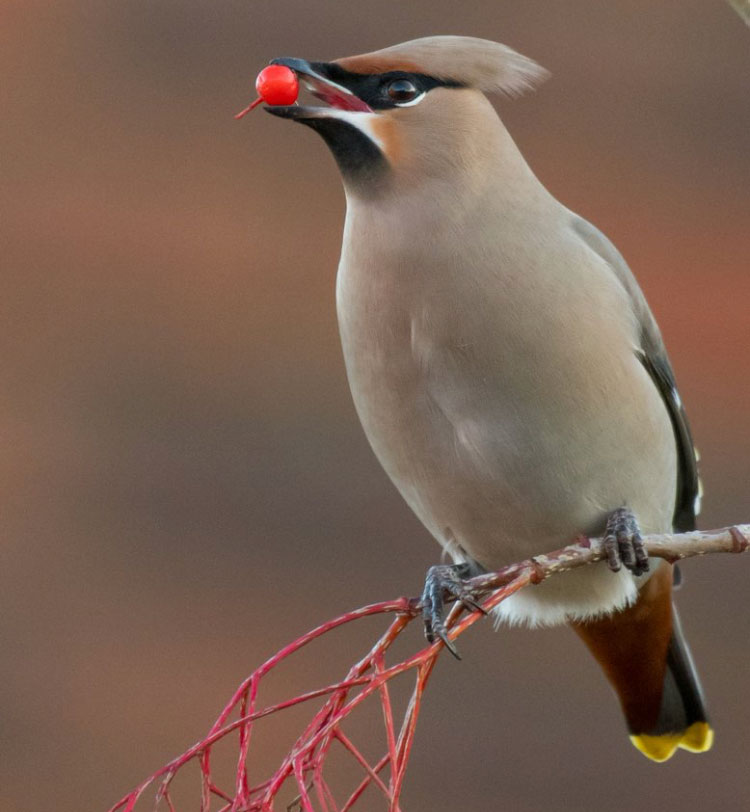 Often they eat berries fermented in the frost and accidentally intoxicate themselves – so some may well have woken up with a hangover on New Year’s Day too. Image by Dan White.

They’re not big birds – about the size of a stocky starling. But what waxwings lack in stature, they more than make up for in style. There’s that ridiculous crest of course, the striking black mask on its face and the bright yellow bar on the tail that looks like it’s been coloured in with a highlighter. And what about those weird red bits on the wings? The unusual scarlet tips to the ends of the bird’s flight feathers resemble tiny blobs of sealing wax and give the bird its name, but their precise function is still something of a mystery.

During most winters, fewer than a thousand waxwings will come to our shores, but during a so-called ‘waxwing winter’ 10,000 or more may arrive. These ‘irruptions’ (as they’re known) have become more common over the last 20 years, so keep an eye out for waxwings during your weekly shop. Be careful though – one glimpse of these glamorous creatures and you’ll become a birder for life.

Featured image: The New Romantic of the bird world. Image by Mike Trew