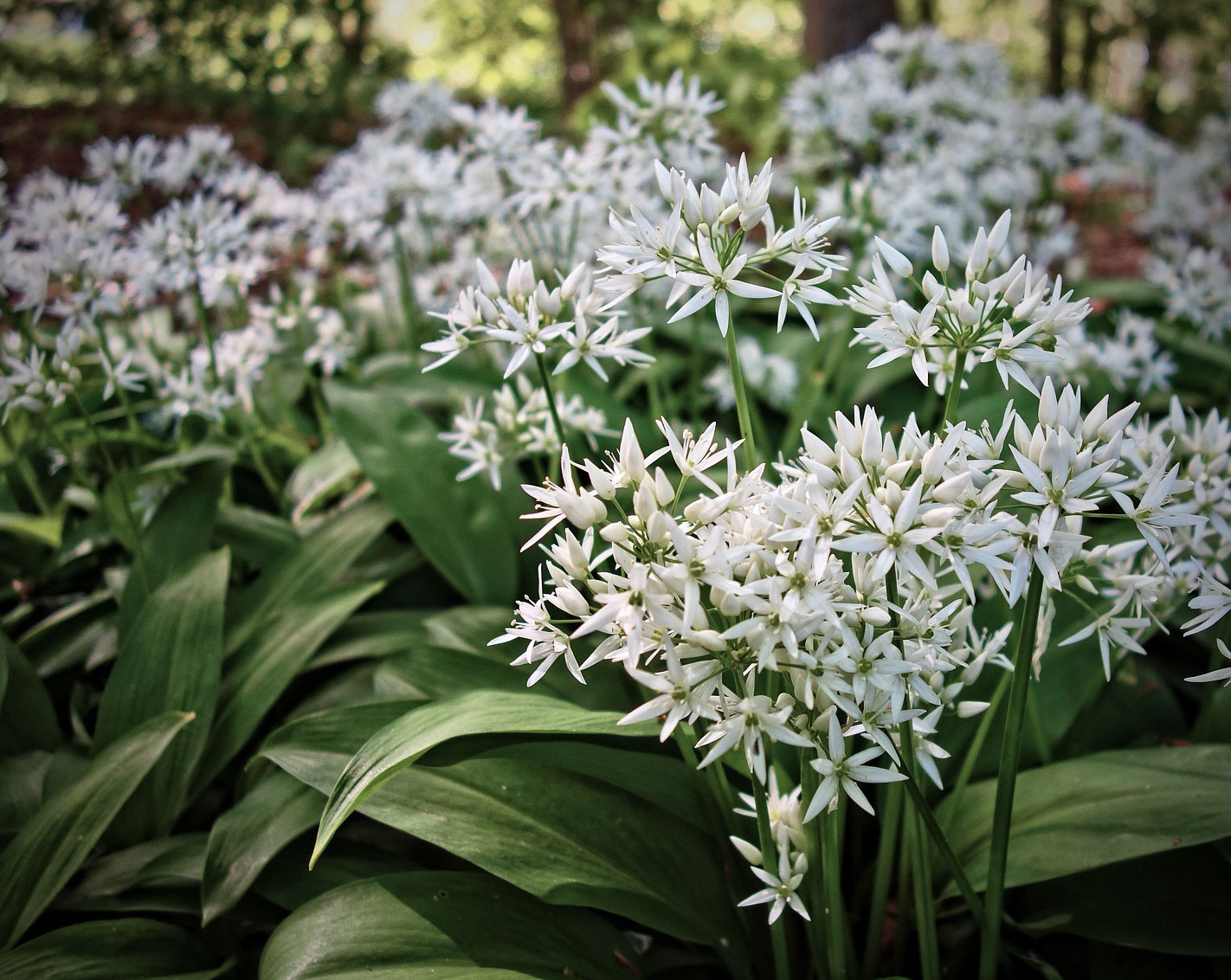 Try to get a little taste of wildness every day, says Pete Dommett.

It’s a challenge for us all to feel either of these things at the moment, I know.  But, while you’re savouring the freedom of your daily dog walk or morning jog, there’s a couple of wild, forage-able flowers to look out for.  One is coming to the spectacular end of its short spring season; the other begins to blossom at the end of this month and heralds the coming of summer.

Chances are you’ll smell wild garlic before you see it.  In May, many of Bristol’s leafy spaces – such as Leigh Woods, Badock’s Wood, Manor Woods and the cemetery at Arnos Vale – are awash with this pungent plant, often an indicator of ancient woodland.  Its emerald, spear-shaped leaves have been out since March, but the dazzling displays of starry, white flowers are on show now and sometimes last until June.  Both are edible: as a salady substitute for spring onions; finely chopped and mixed with mayo for a mild, creamy dip; or whizzed up with pine nuts, olive oil and parmesan for a better-than-shop-bought pesto.  Like its more commercial cousin, wild garlic is said to have a wealth of health benefits, apparently lowering levels of cholesterol and blood pressure.

While the leaves have a garlicky scent,
the flowers are pretty and smell honey-sweet

Wild garlic is good for wildlife too.  The flowers attract important insect pollinators –including hoverflies, butterflies, bees and beetles – but their strong scent is said to repel cats, making it an attractive addition to a bird-lover’s garden.  Over in the Forest of Dean, wild boar will be rooting up wild garlic bulbs which, once upon a time, would have also been a favourite food of brown bears (as recognised by its scientific name Allium ursinum, meaning ‘bear leek’).  In fact, this plant has quite a collection of alternative monikers – ramsons, buckram and (my favourite) stinking nanny are just a few.

According to Richard Mabey, author of ‘Food for Free’ (a seminal book for foragers, published in the Seventies), elderflowers can be “munched straight off the branch on a hot summer’s day and taste as frothy as a glass of ice-cream soda.”  If this sounds a tad fanciful, the sweet-scented cordial that you can make (easily) from elder’s lacy sprays of blossom is truly like liquid summer in a bottle.

Elder grows anywhere – in woods, hedges, roadsides, churchyards and even urban wasteground – and you’ll find it easily enough in the city.  At the end of May and beginning of June, this otherwise unremarkable shrub is suddenly covered in clusters of creamy-white flowers which, when picked on a sunny day and away from traffic fumes, can be transformed into a golden syrup (delicious when diluted with sparkling water) or even elderflower champagne.

Like wild garlic, elder has long been believed to have healing properties and has been used in home-made remedies for a multitude of maladies, from common colds to arthritis.  In more orthodox medicine, the flowers have been included as ingredients in skin ointments and eye lotions.

As with many ancient and native plants, elder is steeped in superstition.  An Anglo-Saxon folk-tale believed that if someone fell asleep under an elder tree in full bloom, they would be transported to a wonderful fairy world where they’d be protected from evil spirits forever.  Right now, that sounds quite appealing.

For wild garlic and elderflower recipes, go to wildfooduk.com

This article was scheduled to appear in our May edition. Special thanks to our regular wildlife writer Pete Dommett.