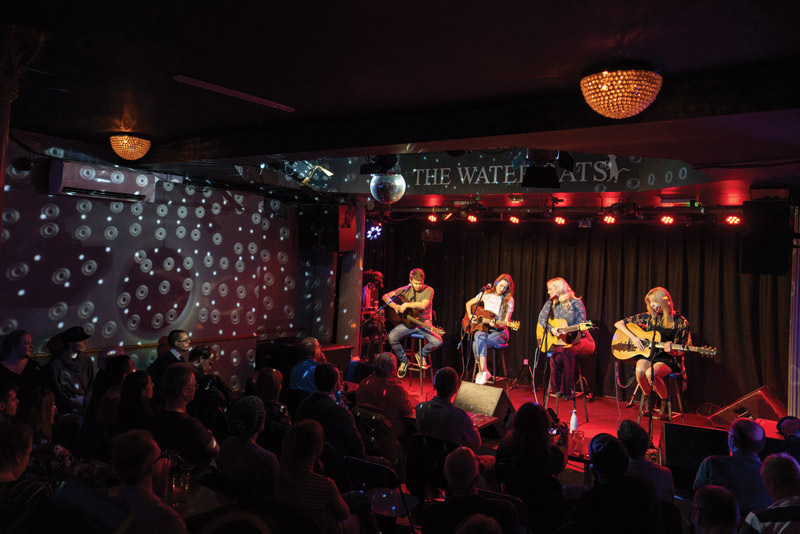 Bristol’s strong musical heritage has inspired, helped produce and attracted a range of artists and genres over the decades, in and around its varied live venues, and this month the city will celebrate some of its best up-and-coming female talent. Aiming to champion female songwriters, encourage mutual support among them and start conversations about women in music, it will “put female songwriting talent back in the spotlight and inspire more women to create original music,” in the words of Emily Faye, one of the artists bringing the Write Like a Girl initiative to Stokes Croft.

With the female-empowered movements of recent years, there are more and more voices calling for women to be heard in the industry. Songwriters need to be a member of a performing rights organisation to be paid for their work and, according to figures from the Performing Rights Society for Music – this country’s collection society for royalties – fewer than one in five UK songwriters are women with only 17% of PRS members female. So, why are there fewer female writers? “The actual number of women writing songs could be much higher than 17%, but these women are not registered songwriters with PRS, so unless they are a member of another organisation they are classed as amateur ‘hobby’ writers as they are not making any money from their music,” explains Write Like A Girl’s Beth Keeping, who is a songwriter and artist herself. “If we had access to the number of female writer credits on songs that get released and make money, it would be a lot lower than 17%.”

Over the last few years, there have regularly been stories in the United States about the lack of equal play for female artists on the radio. Recently a writer for Variety tweeted that they heard a country radio station play the work of two females twice in row and made a quip about whether the show in question would be fined for doing so, referring to the under-representation of female artists. The whole thing blew up when the radio station replied, stating the unwritten country radio rule that they were not able to play two female artists back to back, not even groups that had female members. This issue has existed for years, with some radio stations repeatedly claiming that their listeners prefer male artists. The story caused public outcry, with female artists calling out said stations for this all too common response. “The barriers that women face are just as big off-air,” continues Beth. “If you look at the credits on the few songs by female artists that are played on the radio, they are often co-written with and produced by men. Female writers and producers are not getting the same opportunities, and I wonder whether it would make female artists feel more empowered to express themselves lyrically if they had another female writer in the room to collaborate with.”

A rising star on the UK country scene, Write Like A Girl founding member Vic Allen articulates it from her perspective: “Writing songs is a way of expressing my emotions and experiences, and helps me to heal from bad ones. To write as a woman can make you vulnerable as people can be quick to judge and label you as ‘whining’. It’s so important to continue writing what you want to as otherwise songwriting isn’t as enjoyable and people won’t connect to your music. I think there are a lot of female writers, but in the music industry they are not taken as seriously. I’ve been told (by a man) that without boys I’d have nothing to write songs about, which I thought was very unfair as I write about a lot of other subjects – and men write about women/break-ups all the time!”

Despite the challenges, female songwriters are striving to make successful careers and are receiving recognition. Bristol country soul queen Yola was nominated for four Grammys this year, and won Artist of the Year at the UK Americana Awards. She also contributed tracks to The Highwomen, a country music female supergroup Members include Grammy-winning artists Brandi Carlile and Amanda Shires. Female songwriters are joining forces and collaborating to take a positive step forward to make changes within the industry and this month Beth, Emily and Vic will perform at the Write Like A Girl event in a writers’ round format, telling the stories behind their songs. Guests include Bristol country-pop singer Kelsey Bovey, whose music – including debut single Define Me – covers emotional responses to social situations including her experience of being bullied. Martha Clements, an acoustic pop singer-songwriter from Chipping Sodbury, will also attend, sharing her emotive storytelling, lyrics and melodies ahead of the release of her debut single, and joining them will be Bristol’s Danielle Celeste – just back from Nashville where she co-wrote with a number of talented songwriters and is currently working on her first release.