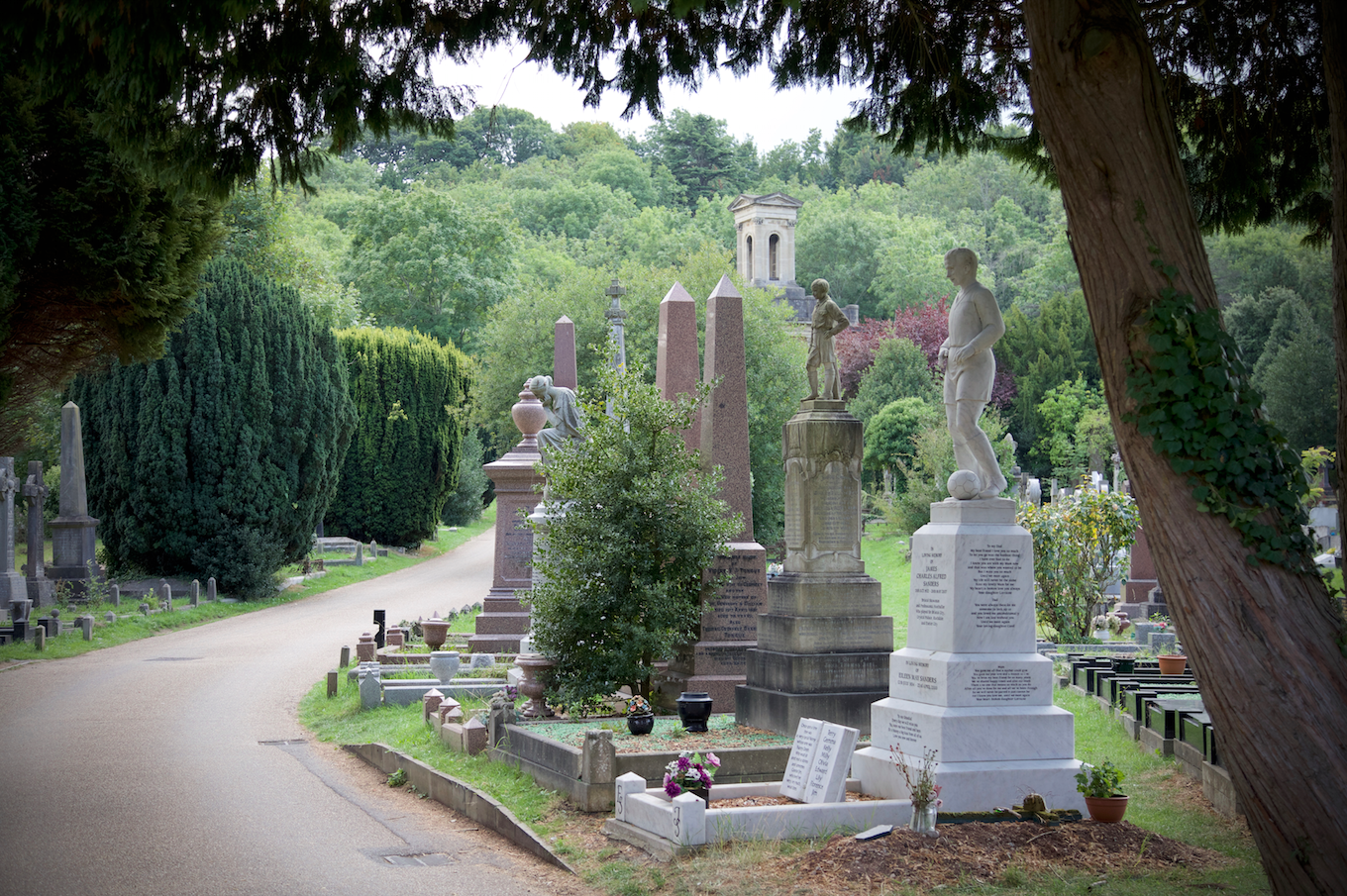 Bristol’s history is surprisingly brought to life in its cemeteries, as Georgette McCready discovers.
Photography by Gavin Thurston

Who would have thought that a visit to a cemetery would make it to the top 20 of Bristol’s favourite attractions? But there on Tripadvisor is the city’s largest burial ground, Arnos Vale, with 442 largely favourable reviews and placed at number 13 of 236 things to do in Bristol. So why visit a load of old graves? Well, firstly because the 45-acre site is a beautiful, tranquil green space within the city and it’s packed full of human interest stories, of lives recorded in stone. Its gravestones tell of love, loss and suffering and of great achievements too.

There is also a family friendly café on site, some parking, a gift shop, wildlife and birdsong – and admission is free. It’s no wonder that on a sunny day in early autumn the place is a popular destination for families, dog walkers and the lone wanderer, in search of peace among the trees. 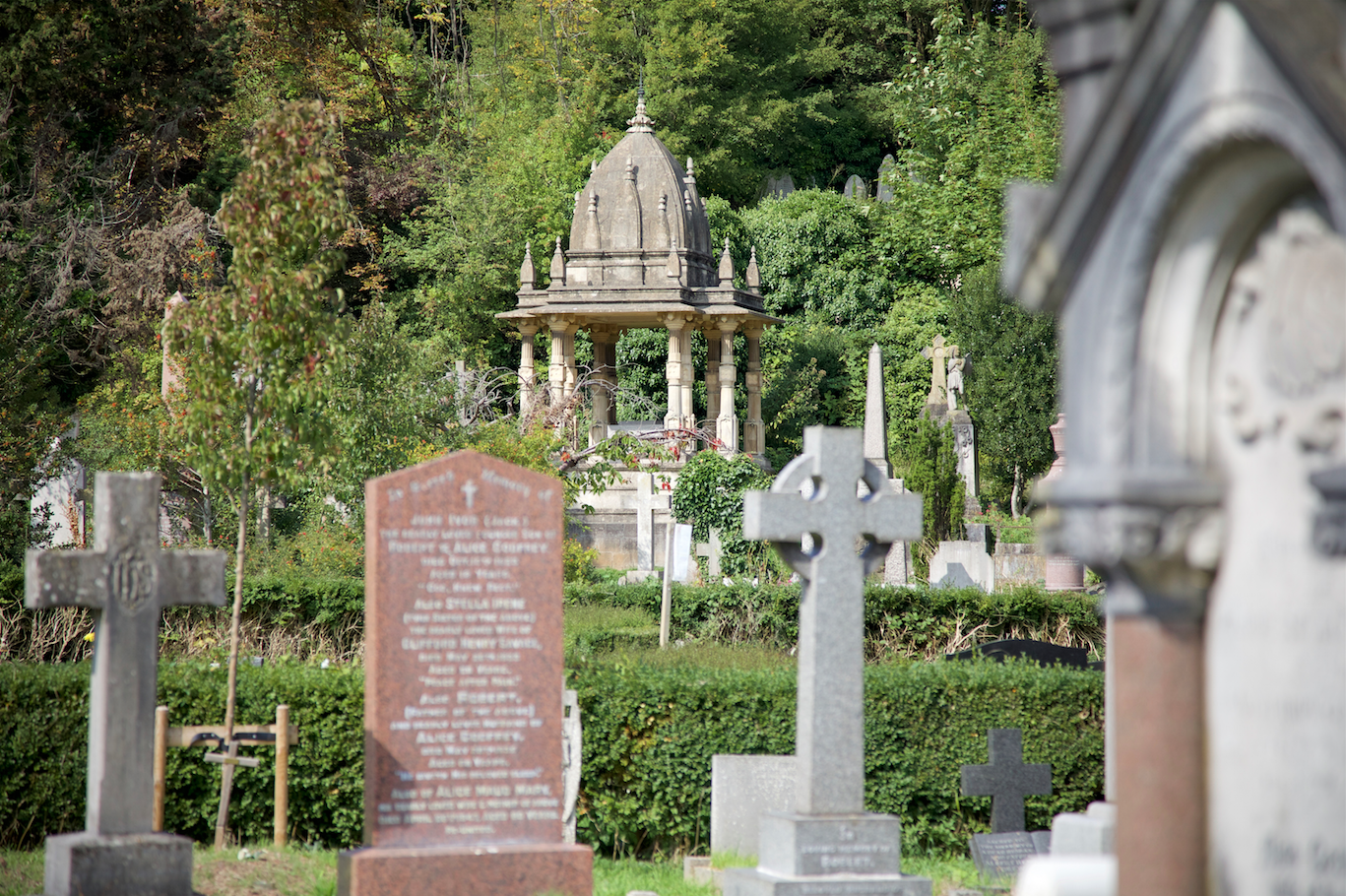 Tombstone tourists, or taphophiles to give them their Greek title, will have a field day in Arnos Vale. There are weeping angels, ornate urns, impressive obelisks and fascinating epitaphs to get engrossed in. And once you venture off the main driveways it’s easy to get pleasantly lost among the ivy-clad tombs and paths that lead nowhere.

The cemetery was designed by Bristol architect Charles Underwood, who was part of the garden cemetery movement, which is why the plans include sweeping walkways, classically inspired chapel buildings (one for Church of England members, the other for what they called dissenters, or non-conformists) and the planting of specimen trees including cedar, pine and cypress. It truly is a city of the dead, containing memorials and commemorations to more than 30,000 people.

Unlike Highgate Cemetery in London there is no obvious tourist trail of the great and the good. But there are plenty of graves of people who came to Bristol and who made their mark on the world, that you might like to seek out during a visit…

The social reformer
The most impressive and majestic tomb in the cemetery is dedicated to the memory of Indian writer and social reformer Rajah Rammohun Roy (1772 – 1833). He coined the word Hinduism to describe the diversity in Indian religions and campaigned effectively for social reform, improved education and for women’s rights. He was a key figure in influencing the end to the ritual of sati, or suttee, in which widows were encouraged to throw themselves on to their late husband’s funeral pyre as an act of sacrifice. Roy died of meningitis during a visit to friends in Bristol and his tomb has become a place of pilgrimage for Indians and Bengalis.

The sportsman
One of the more recent and striking memorials in the cemetery is a statue of a footballer – a tribute to James Sanders, known as Jim, who died in 2007. He combined a life as a travelling showman with his professional footballing career and in his time he played for Crystal Palace, Rochdale, Exeter City and Bristol City.

The children’s champion
Tens of thousands of Bristolians turned out on to the streets for the funeral procession of Prussian-born George Muller, who died in 1898. He was hugely admired in his adopted city; having come here with only a modest amount of money he managed to raise enough funds to open an orphanage. Over the years he rescued thousands of local children from poverty and abuse. His coffin was escorted by 1,000 children who paid their respects to the man who had changed their lives.

The lifesaver
Dr William Budd (1811 – 1880) worked at the Bristol Royal Infirmary and was a pioneer of research into waterborne diseases typhoid and cholera. After a massive deadly cholera outbreak in the city he concluded that the use of dirty water was carrying the disease and persuaded the city authorities to clean up Bristol’s water supply and so save the lives of future citizens. There is a stone carving of a pelican, piercing her chest with her beak to feed her young, on another doctor’s gravestone. This mythical act of sacrifice was chosen for the memorial to surgeon Joseph Williams, who died in 1849 after volunteering to tend cholera patients at Stapleton Workhouse and contracting the disease himself.

The tireless campaigner
Mary Carpenter (1807 – 1877) is one of relatively few women who have memorials in their own right, rather than as wife, mother or daughter. She founded a so-called ragged school for the city’s poorest children to learn to read and write. She also opened two homes for children with criminal records and was a tireless campaigner for prison reform and the education of girls.

There are many more stories to be explored at Arnos Vale, some of them easily traceable, like the Wills family who founded the tobacco factories, and some of them not widely known but which pique the curiosity. What is the story behind the Warrior family’s decision to have ‘No Surrender’ carved on their joint memorial, I wonder? 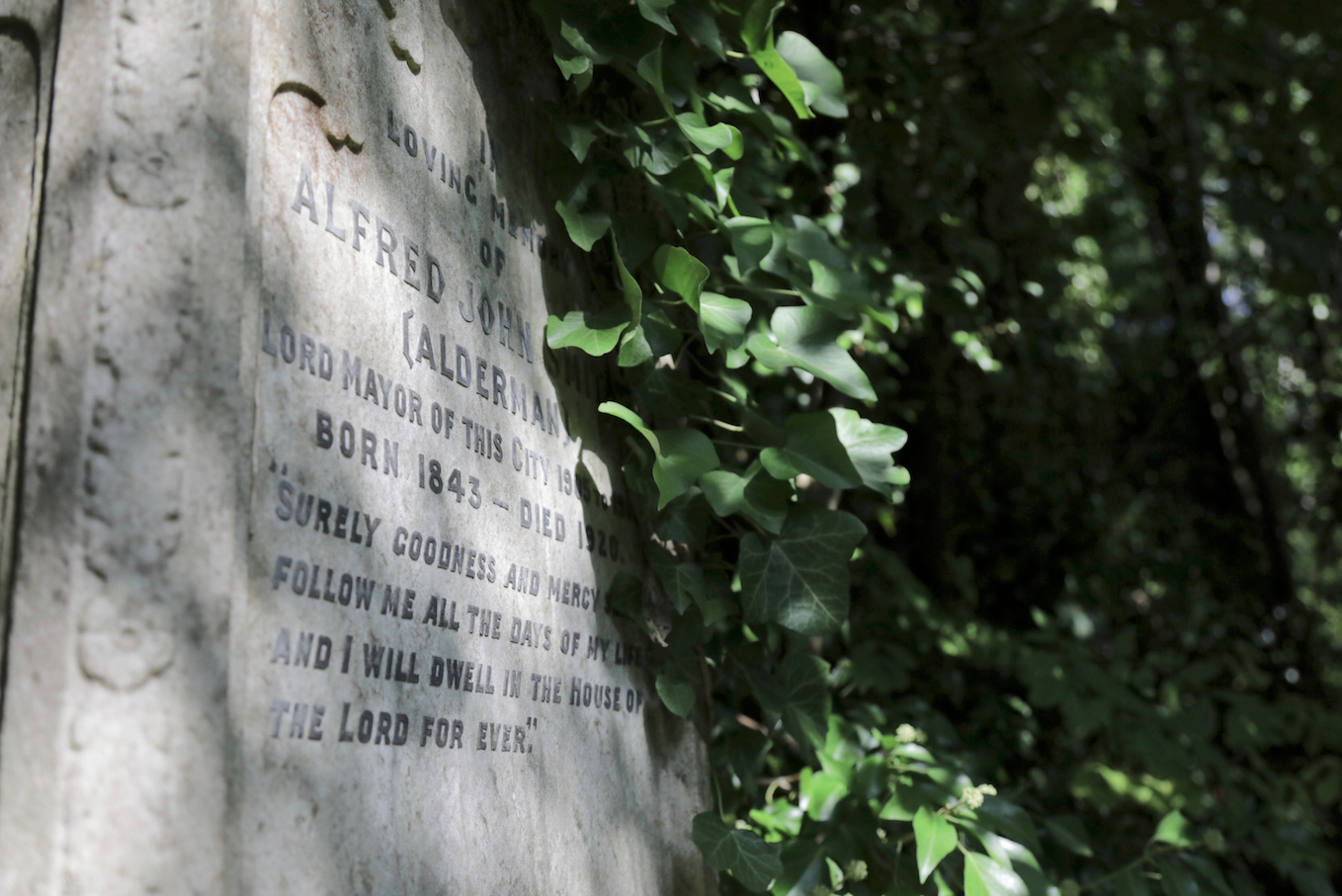 Whenever you visit a cemetery you’ll see serried ranks of small, simple stones, or sometimes an individual one on its own – always easy to spot, carved as they are from almost white Portland stone. These war graves – such a familiar sight in Bristol’s cemeteries – are a design classic. They were created by what was then known as the Imperial War Graves Commission with a view to creating gravestones for those who had died in the First World War, but without distinguishing between rank or religion.

Rudyard Kipling was invited to choose the wording used and the architects Edwin Lutyens, Herbert Baker and Reginald Blomfield came up with the simple design. All the stones are uniform, rendering all men and women equal in death. It is only when the viewer gets closer that they can read the name, age and rank and see a symbol such as a battalion badge or a Star of David.

There are several large cemeteries in Bristol that serve as green spaces. Greenbank Cemetery in Easton is worth a visit, counting some fine carved angels among its tombs. It also has a memorial to the dead of the Second World War bombing raids over Bristol and the graves of German Luftwaffe crew who died during those raids. 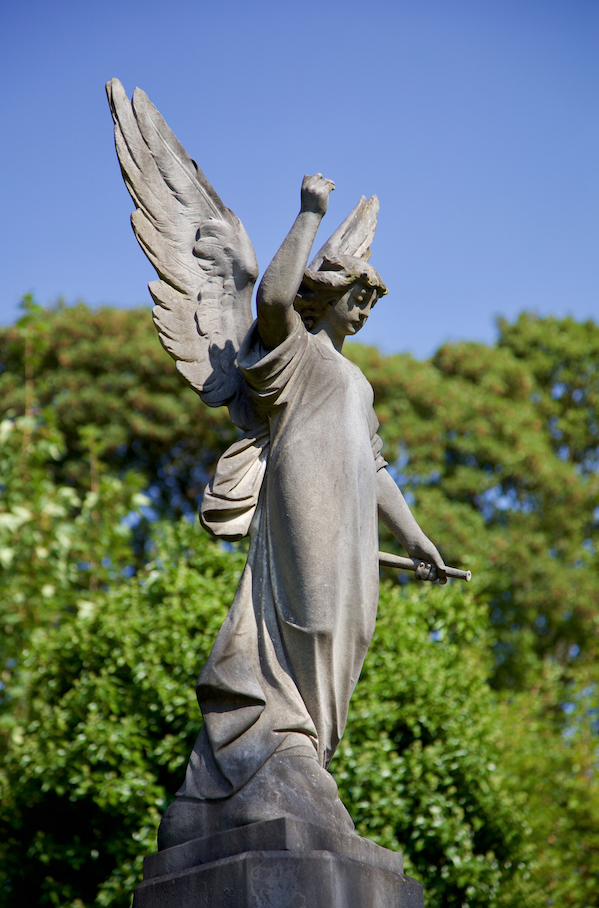 Not far from St Mary Redcliffe, tucked away beside the busy roundabout, is a former Quaker burial ground. It doesn’t much look like a burial ground, but if you go to the back of the site you’ll find hundreds of gravestones stacked up. The Quaker community graciously allowed part of their burial ground to be used for road widening, and this is the sad consequence.

Another spot for quiet contemplation is Birdcage Walk in Clifton, the delightful tree-lined walkway which passes between an ancient churchyard once part of St Andrew’s Church, which was destroyed in the Second World War. Most people pass through without really noticing the graves beyond the railings, but the curious find their way through the small gates, free to wander among the overgrown graves. It was this spot that inspired the late Bristol-based (and award-winning) novelist and poet Helen Dunmore to write her last work of fiction, the best-selling Birdcage Walk, set in 18th-century Bristol.

• For events at Arnos Vale visit arnosvale.org.uk. Guided walks are held every Saturday until 10 November, from 1.30pm to 3pm 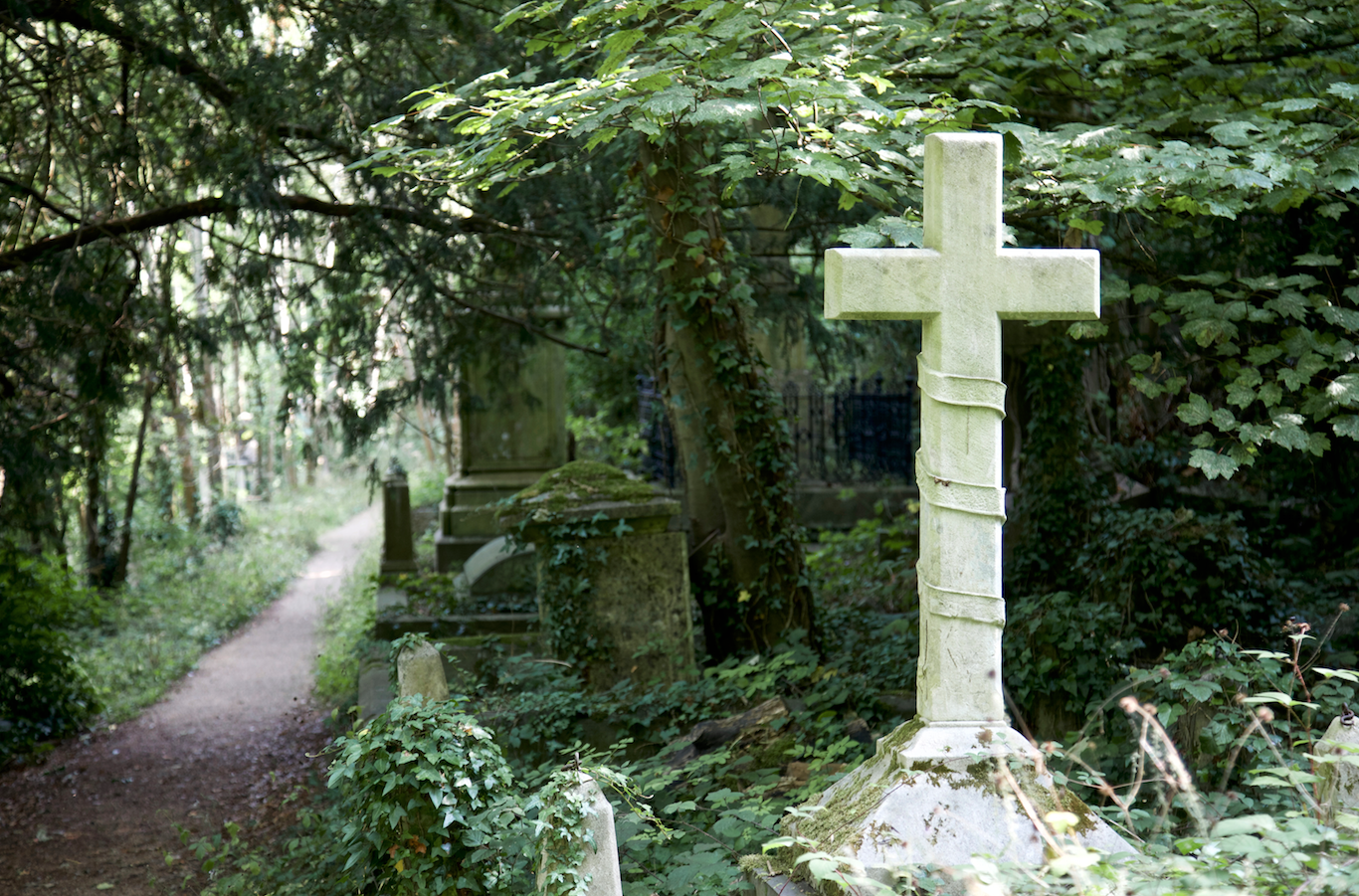 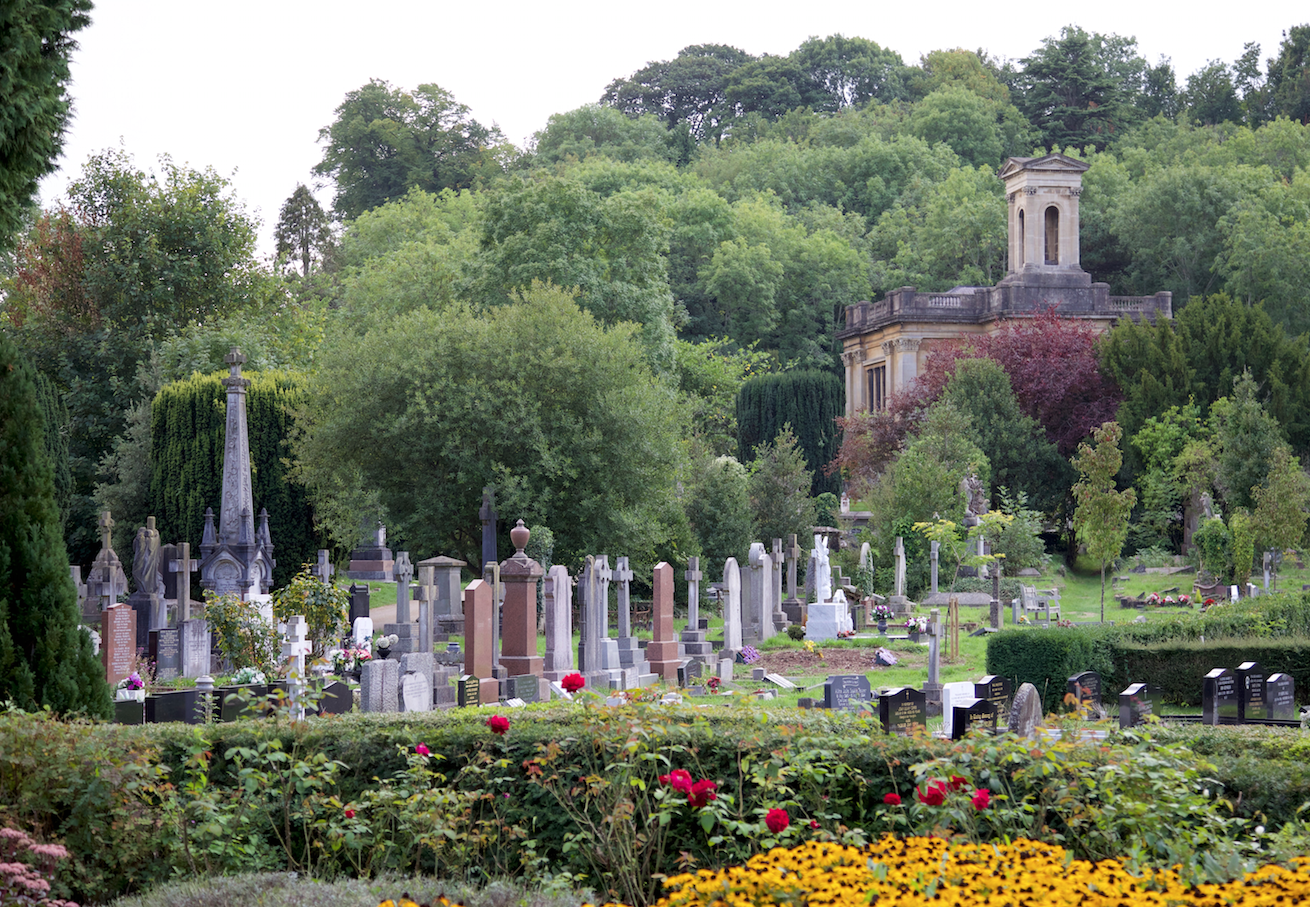 Next
The Modern Country Kitchen: With the grain
Start typing to see results or hit ESC to close
bristol style fashion history gender
See all results