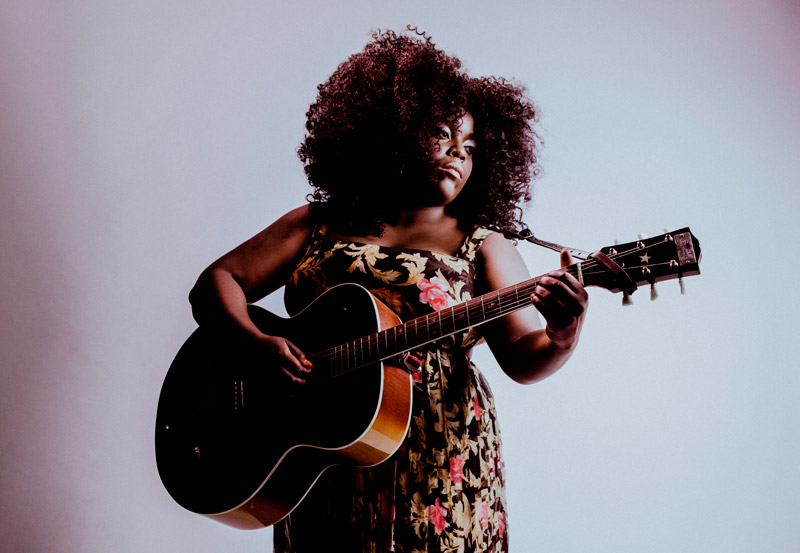 Grammy-nominated country-soul singer Yola has overcome numerous challenges to become one of the most powerful emerging voices of British music today. Here she talks to Amanda Nicholls about reinvention, humility, the Bristol musicians that helped her along the way and how it feels to count Elton John among your fans

“In some ways, I was reborn in that fire,” says Bristol country-soul singer Yola of the domestic disaster she survived, and which partly inspired her Grammy-nominated debut album. Literally engulfed in flames in a house fire, she found “a higher truth” in the experience. “To be vulnerable is terrifying but to walk through fire with a smile on your face is about as liberating as anything can be,” she says. “The first part of my life had been pretty heinous. I was a few years into a good place and I was thinking, ‘even on fire, I wouldn’t trade my life now for what it was’.”

Yola was even homeless for a time in her early twenties, when she fell behind on rent while trying to make it in London, but her musical ambition never wavered and, with little to lose, she readily took the risks necessary when chances came her way in music – she’d only just come off the dole when she found herself performing with Massive Attack as they headlined the Other Stage at Glastonbury Festival.

Walk Through Fire – produced by Dan Auerbach of The Black Keys and featuring Nashville collaborations with the likes of fellow Bristol-born artist and pop hitmaker Roger Cook – is a genre-bending release that speaks of both heartbreak and triumph. Between the isolation of being raised in a small town outside of Bristol in the only black family around, her family’s poverty, and a turbulent home life, Yola has lived a life of challenges; including finding her only refuge in her mother’s record collection while simultaneously being “banned” by her from making music. “I used to pretend I was going to sleep over at school friends’ houses in Bristol then go out and do gigs,” Yola remembers.

It’s been a meteoric year for you, with the four Grammy nominations surely the icing on the cake. What does that mean to you?

It means that I’ll be able to do what I love for longer with people I love and love working with. It means another step on the road to agency and freedom, because of the route I chose.

Other than the accolades, what were your 2019 highlights?

I can’t pick one thing! Every week something else crazy would happen and, to be frank, it’s been quite a blur. The only thing I can make out in the haze are the friendships I’ve made over this past year. Despite the seemingly endless list of fabulous people I’ve met, the theme has been one of sincerity and utter humility. I’m aware of how rare this is in the rarified air I’m now breathing.

Tell us more about the philosophy behind Walk Through Fire…

Any break-up, separation or need for reinvention can feel like an all-consuming fire when you’re in it, but the enduring and survival of it can leave you with a more urgent and meaningful appreciation for life.

Did you expect Nashville to embrace your music so enthusiastically?

I don’t think I expect anywhere or anyone to embrace me automatically. I’ve not been born into such a sense of entitlement or privilege that I could be afforded that luxury. Like in any place you have to find your people; abide the general noise of people that don’t see what you have to offer until everyone else does.

More country sounds seem to be making it onto mainstream radio in general at the moment; why do you think that is?

I honestly think we’re just experiencing the fallout of that Cohen Brothers movie O Brother, Where Art Thou and its exploration of American roots music in a less stereotyped way. The more you keep subjects and genres and people in the general international conversation, the longer they stay relevant and the more chance people have to discern meaning and connection. I know a lot of musicians that were affected by that soundtrack and a lot of artists subsequently influenced.

You seem very much in control of your image and sound, ideas and identity – are you glad that the level of recognition you are receiving now has come a little later in life rather than as a teen, for instance?

I have a far larger team than I’ve ever had. Dozens of people are behind this project and its successes. I’ve made a point of not being scared to lead just enough to actually choose my own company (literally cherry picking my own team one by one for their many virtues). I honestly had spent a large portion of my life being chosen and being thankful for being included. I’d rarely ever done the choosing. Without choosing people that understood me, I would’ve never got out of the gate. Love, support and understanding were at the heart of my development as a solo artist and continue to be as I prepare for the Grammys.

How did your new cover of Goodbye Yellow Brick Road come about?

I grew up on Elton John, quite simply. He was one of my all-time heroes. I remember hearing people I was working with making disparaging comments about gay artists. All masquerading as humour but with clear homophobic overtones. Anti-feminist rhetoric was also common and so artists like Elton or Joni Mitchell, or anyone who didn’t toe the party line, was out. Therefore I yearned but couldn’t cover an Elton song until I was in an environment where my tastes could come to the fore. I was featured on Elton’s Rocket Hour show and it all led from there, with more than just a little help from my team and my good friend Brandi Carlile.

Where are the first places you go when you get back to Bristol?

Whenever I get back to Bristol I go straight to my friends’ houses and catch up. Quality relationships are some of the most important aspects of my life.

Who in Bristol really helped support your solo career?

Anyone who says they were instrumental in my success is desperately seeking to lay claim to my innate will to pursue genre-fluid music. That’s unless they’re Kit Hawes, John Blakeley, Jon Short, Harry Harding or Aaron Catlow. Kit patiently waited for me to learn guitar over years, collaborating all that time with no sense of a break or not having time for me.

John B and Jon S, helped me relentlessly and did all the admin for my EP, Harry did all my demos and Aaron was there in every different incarnation and set-up of the band as I developed the sound and what I could do as a solo artist, and drove us round Nashville for the whole week of our first foray to AmericanaFest while everyone else drank. All with an even-handed friendliness, love and support any mate would be proud of. If you want to know who I admire most in Bristol, it’s this fine lot!

What’s in the pipeline for 2020, for the brand new decade?

The Grammys this month, touring, festivals and a new album!