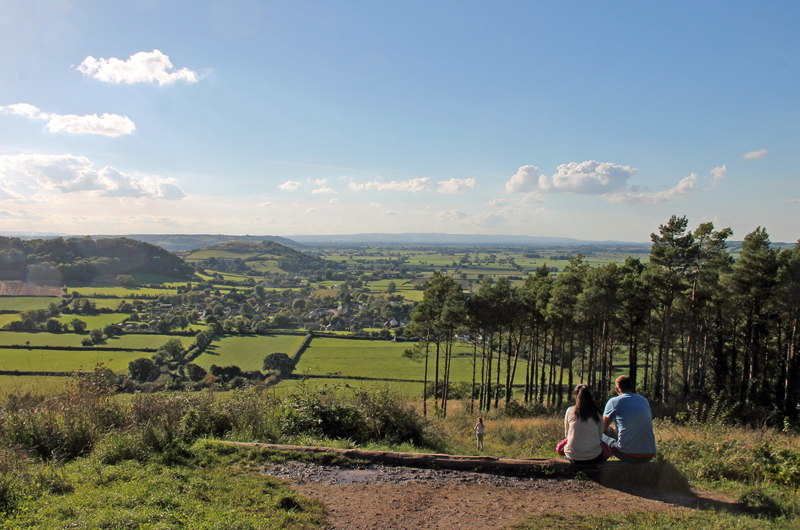 Picnics with a view

With everyone getting out more, the popular beauty spots are proving very busy. Here Andrew Swift reveals six less well known walks with great vistas and where a quiet picnic might be possible

Unlike last spring, when we could only venture forth for an hour, we can at last start to travel more freely. Days out will, for many of us, though, remain the norm for a little while longer. Not surprisingly, with people more desperate than ever to get out and enjoy themselves, the most popular places to visit will be busier than usual, and with social distancing still very much in force, this creates something of a problem. With this in mind, here are suggestions for six places you may not have thought of visiting, all within less than hour’s drive from Bristol, all ideal for a picnic, all with superb views, and all with plenty of room to wander freely.

A couple of miles south of Weston-super-Mare, Uphill offers a much quieter option for a seaside stroll, and the sands are just as enticing. Free parking is available at the Village Car Park on Uphill Way (ST316585; BS23 4XP), ten minutes walk from the beach. If you head 100m along the road from the car park in the other direction, however, a track leads up to the ruined church of St Nicholas high on a breezy down, with superb views in every direction. You can also climb a nearby windmill, converted to an observatory, where various landmarks are identified on information boards. Southward lie two nature reserves, tracks through the levels of the River Axe, and – if you’re feeling energetic – the Somerset Coast Path, leading onward to Brean and Burnham.

Combe Hill Wood, on the western edge of Mendip, lies on the Polden Way, which runs along an escarpment with some of the finest views in Somerset. A free car park can be found 3 miles south of Street on the back road to Charlton Mackrell (ST503329: BA6 8TP). From here, a 1200m all-ability access path, suitable for wheelchairs and pushchairs, leads to a magnificent viewpoint over the Somerset Levels. For a longer walk, you can head south for two miles along the escarpment to Hurcot Hill. Alternatively, you can head north for three-quarters of a mile to a 33m-high monument to Admiral Hood, and one of the most dramatic surprise views anywhere, where the woods have been cut away eastward to reveal Glastonbury Tor.

Another walk which is more or less on the level can be found, somewhat surprisingly, just off the Cotswold Way. Uley Bury is the most spectacular Iron Age fort in Gloucestershire and a walk around its ramparts yields some superb views – and plenty of places to stop for a picnic. To get there, drive north through the village of Uley, carry on along the B4066 for half a mile and pull into a lay-by on the left at the top of the hill. (ST786993; GL11 5BH) Here there is a choice of two gates. The one on the right leads to a viewpoint from where you can head north along the Cotswold Way; the one on the left leads to Uley Bury. If the lay-by is full or you fancy driving a little further, carry on along the B4066 for a just over a mile and, when you see a sign for Coaley Peak picnic area, pull into a car park on the left. (SO794012; GL10 3TP) Here too you are on the Cotswold Way and the views westward towards the Welsh Mountains are just as fine.

The Park & Ride car park on Lansdown, north of Bath (BA1 9BJ: ST731680) is signposted from the A420 in Wick and from the A46/A420 roundabout at Cold Ashton. It is the starting point for some spectacular walks and a succession of splendidly-situated picnic spots. Gates lead from the car park onto an expanse of playing fields from where you can head south along the escarpment, following a rough path through kissing gates to an Italianate tower built by William Beckford with the proceeds from his Jamaican sugar plantations. Once surrounded by ornate pleasure gardens, it now stands amidst an atmospheric Victorian cemetery with views over the Avon valley. If you head north from the car park, meanwhile, you can follow the escarpment alongside Bath Racecourse to Prospect Stile, which commands a view stretching from the Wiltshire Downs to the Welsh Mountains, as well as the cities of Bath and Bristol. Northward again, along the Cotswold Way, is the site of the Battle of Lansdown, fought in 1643.

Administered by the Avon Wildlife Trust, this 98.5 acre site consists of flower-rich grassland and ancient woodland, high above the Avon valley. Although it lies to the east of Bath, you don’t need to drive through the city to get there. Head south along the A46 from junction 18 of the M4, carry on past the turning for Bath and turn right at the end of the dual carriageway along the A363. Take the first left by the Crown Inn and after two-thirds of a mile, turn right up Prospect Place, which climbs steeply for a quarter of a mile to a car park on the right (BA1 7TP: ST797664). From here paths lead through the woods, past old caves and quarry workings to an area of open downland, with trains rattling along the valley below and a ruined tower high above. Some paths are steep and rocky, but there is the option of heading westward across Farleigh Down to the picturesque village of Monkton Farleigh, and you can also follow a waymarked geological trail.

The views here rely not on height but distance – in this case across the tidal reaches of the Severn Estuary. After pulling into a car park alongside the Gloucester & Sharpness Canal in the village of Purton (SO692042: GL13 9HS), you can follow the towpath south to an extraordinary ships’ graveyard (known as the Purton Hulks), where over 80 craft have been deliberately beached to protect the canal from the ravages of the Severn. From there you can continue south past the remnants of a railway bridge abandoned after being rammed by two barges in 1960 and on to Sharpness, where the canal flows into the river – making a round walk of four miles, all on the level and with plenty of places to stop for a picnic.