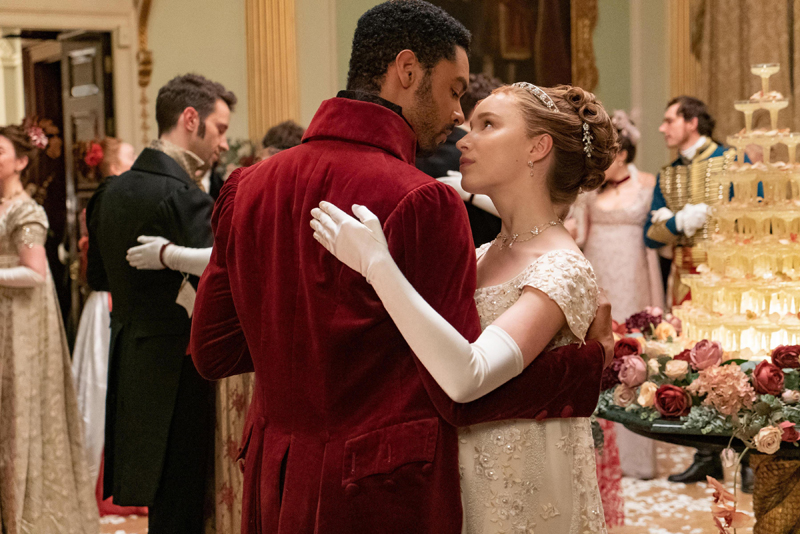 The devil is in the detail

You may miss it at first but avert your eyes to the far right of the photograph above and you will see a spectacular arrangement of “Marie Antoinette” coupes drowning in lavish Champagne. The intricate display was built by Bristol-based model and prop-making company, Mangostone, whose work often plays a cameo role in our much-loved films and dramas. This month, Simon Horsford catches up with co-director Laurens Nockels, who talks Bridgerton and beyond

Bridgerton’s frivolous and steamy take on the Regency era may have made it Netflix’s most-watched series, but the devil is also in the detail. Production designer Will Hughes-Jones, who worked on the series for the TV company Shondaland, said earlier this year: “I was like a kid in a sweet shop… what’s not to like about creating a heightened pastiche of the Regency world?” Similarly, show runner Chris Van Dusen had a vision of something “lavish, fun, big and bold.” The look throughout the series is sumptuous, but one that’s been carefully and imaginatively crafted.

And so it was to a Bristol-based model and prop-making company, Mangostone, that the production team turned to when they wanted an extravagant tower of champagne coupes for one of the ballroom scenes shot in The Guildhall in Bath. A still of the “Marie Antoinette” glasses together with lovers Simon Basset (Regé-Jean Page) and Daphne Bridgerton (Phoebe Dynevor) in the foreground was also used to announce that Bridgerton had been commissioned for a second season (subsequently it’s been signed up for at least four series).

Mangostone’s co-director Laurens Nockels explains that the commission came in late 2019 when they were contacted by one of the production’s art departments. “We didn’t know it was Bridgerton when we were quoting on it. It sounds straightforward [the design], but when you drill down into how many glasses there were [around 200], you need to know how it’s going to work and how they are all going to stack together neatly. There’s quite a lot of maths involved.

“They were actually normal, plastic, catering glasses. So what we are seeing here is smoke and mirrors. We stuck different tiers of glasses together and filled them with clear resin with a yellow tint and gold glitter to get the right sort of Champagne look. Then when a gloved hand pours the Champagne over the glasses in the shot, it looks like they are filling up.” It certainly looks very convincing.

Nockels, who has worked for more than 20 years as a sculptor, prop maker, and project manager in the film, TV and advertising industries, runs Mangostone with fellow creative Tony Tarquini. They collaborated on numerous occasions as freelancers before forming the company in 2017. The name, incidentally, coming to Nockels while eating a bag of mangoes on a beach in Honduras 20 years previously.

Nockels’ long association with Bristol stretches back to childhood when his family moved to Somerset, and continued via studying fine art sculpture at UWE Bristol. A work experience position led to a role at Aardman Animations in the city where he worked on making sets and props for the likes of The Wrong Trousers, A Close Shave and Wallace & Gromit: The Curse of the Were-Rabbit. “It was a dream job. For me it was like being a round peg in a round hole,” jokes Nockels, whose freelance gigs went on to include making props and models on music videos for Finley Quaye, Jamiroquai and Billie Piper and working on advertising promos. “What we do is quite a niche thing, so you have to work across a lot of sectors,” he adds.

In 2013, Nockels got a call to work at Pinewood Studios on Ridley Scott’s biblical epic Exodus: Gods and Kings, which led to him helping set up Pinewood Creative, an in-house prop-making and set-building department. “It was a real challenge, but I loved it,” he says about working on projects such as Disney’s Beauty and the Beast, where they made all the doors and windows. It was a huge operation, says Nockels, for instance “there were 70 plasterers on that production.” At the other end of the scale, Nockels also made models of the Minions, Dave and Kevin, for a promotional tour.

One of the last tenders that Nockels won for Pinewood Creative was for a giant head of Isambard Kingdom Brunel for the Being Brunel museum, which was being planned for Bristol. Although he started work on this impressive bust, one of Nockels’ project manager’s finished the commission as he left to set up Mangostone with Tony Tarquini in 2017. They did, however, work on other features at the museum, such as three sculpted replica busts for Brunel’s office and two interactive mechanical devices, set into drawers, illustrating Brunel’s ideas. It was all part of a continuing association with SS Great Britain, which began in the early 2000s when he worked on refurbishing the steamship.

Another early project for Mangostone was making a cross-sectional model of a human eyeball for the Glasgow Science Centre and they also created 46 life-sized effigies (representing refugees) for Opera North’s production of The Greek Passion.

‘We bring your ideas to life’ is the catchline on Mangostone’s website, but I wondered if there was ever a time when a request was just too outlandish. He recalls a product launch for a perfume when the agency wanted the bottles to “float David Blaine-style above the table!” In the end, says Nockels, we used a combination of perspex and LED lights to create the effect, “we deal in fakery,” he adds.

Two years ago Mangostone made a range of interactive exhibits for the wooden walkway through Bear Wood at Bristol Zoo’s Wild Place site in South Gloucestershire, while at present they are working on a series of animatronic creatures for the BBC series Spy in the Wild – fake creatures, with cameras in their eyes, which interact with their real-life counterparts. “Sculptures of any kind is where my heart is,” says Nockels. “I was constantly making things as a child. My parents were both creatives – painters and illustrators – so there was an art studio in the house.”

As to the future, the pair are working on a new TV series Becoming Elizabeth, a history of the SAS (“we are making Second World War grenades, tank barriers and various artefacts”) and a Netflix crime drama, Havoc, starring Tom Hardy.

I can only imagine what a fascinating place their workshop must be – littered with a weird and wonderful collection of props and models. But what happens to all their creations after they’ve been used? “We make it bespoke,” says Nockels, “the models never come back to us. They either get kept, such as with Aardman, but film props are destroyed, like all the stuff for Beauty and the Beast. I asked for some pieces back, but Disney said no, they are very guarded about their intellectual property.”

Sustainability is, however, a key feature of how Mangostone works. “TV and film production is by its very nature a wasteful industry,” says Nockels, “we are using resins and plastics and so will have some footprint, but we will try use as eco a resin as possible, we use biodegradable materials where we can and [furniture] removers’ blankets instead of bubble wrap.”

With support and mentoring advice from Creative Scale-Up, a government scheme which helps creative businesses in the West of England, Mangostone is certainly going places thanks to its imaginative, can-do approach to making dreams – and ideas – come true.